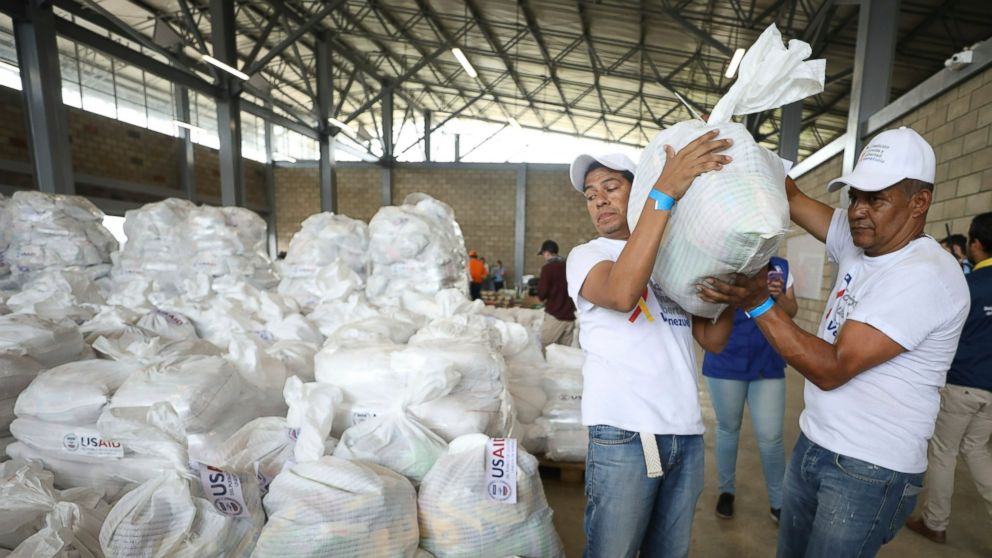 Volunteers in the Colombian border city of Cucuta started preparing US aid packets for Venezuelans. This is in spite of Venezuelan President Nicolas Maduro vowing to not let the US aid in and calling it “fake humanitarian” assistance,” on February 8th.

“The “Humanitarian Aid” is a show to humiliate us and pretend to justify a military aggression; a macabre plan that does not hide the theft of more than $10 billion that the US takes from the Homeland. If you want to help, stop the blockade, the persecution and aggression towards Venezuela.”

Maduro furthermore is calling the opposition to act “sensibly and with common sense.”

“I reiterate the call upon the Venezuelan opposition to act with wisdom and common sense. The path of madness they have taken is wrong, is doomed to failure and only hurts Venezuela. Take a step forward for the Peace of the Homeland.”

He further claimed that the Venezuelan government has done nothing else than defend democracy so far, despite US efforts at regime change.

“Venezuela is in permanent defence of democracy, sovereignty and its right to peace, in the midst of a global media war that invisibilizes the people’s truth, who have decided to fight for their independence, their dignity and their right to exist as a republic.”

The aid was requested by US-proclaimed Interim President Juan Guaido. He has started a rally going around municipalities in Venezuela to gather support for the US humanitarian aid.

“Today we announce, in this communiqué, the beginning of the first phase of the collection of the #AyudaHumanitaria. The Venezuelan army must allow urgent assistance to Venezuelans at risk of death. We’re moving on, all together!”

He also thanked US Congress Speaker Nancy Pelosi for her expressed support of the humanitarian aid provision and the opposition in Venezuela.

Pelosi announced her support in a statement released on February 8th.

“I support the decision of the National Assembly, Venezuela’s sole remaining democratic institution, to recognize Juan Guaidó, President of the National Assembly, as the Interim President until full, fair and free elections can be held.  The United States must respect legitimate democratic processes, and support the right of the people of Venezuela to protest and defend their human rights.“Nicolas Maduro’s regime of repression and impoverishment for his personal enrichment continues to gravely violate human rights, and must be condemned swiftly by the full international community.  His recent decision to block bridges and cut off channels of food and supplies imperils the health and futures of the Venezuelan people, and must be immediately reversed.

During this perilous time, the United States must support the people of Venezuela.”

US National Security Adviser John Bolton continued his usual rhetoric on Twitter toward Venezuela, praising the humanitarian aid and lashing out at “Maduro and his cronies.”

The US is moving quickly to bring humanitarian aid to Venezuela’s doorstep to help the people and their new government – led by Juan Guaido. Hope to see the people of Venezuela, and members of its military, peacefully coming together to allow this aid into Venezuela.

He also propagated the narrative that Russia is concerned Maduro is losing his grip on Venezuela, despite the Kremlin Spokesman Dmitry Peskov saying it is the opposite on the previous day.

Doubling down on a bad bet doesn’t make it a good bet. There is still time for Russia and others to join the community of responsible nations in recognizing Guaido, the National Assembly, and the path to freedom and prosperity in Venezuela. https://t.co/wX5jwV6oy2

Reuters on February 8th cited an anonymous White House Official who claimed that the US is in direct contact with members of Venezuela’s military urging them to defect. They are also preparing new sanctions aimed at increasing pressure on him.

Only a few military officers have defected so far, but the White House allegedly expects more.

“We believe these to be those first couple pebbles before we start really seeing bigger rocks rolling down the hill,” the anonymous source said. “We’re still having conversations with members of the former Maduro regime, with military members, although those conversations are very, very limited.”

Separately, according to data from S&P Global Platts a very large partially loaded oil tanker from Saudi Arabia is heading to Venezuela in “an extremely rare shipment between the two oil producers and OPEC members.”

“The ship is partly loaded, so there could be two possible explanations, according to Platts—one is that the tanker is shipping Saudi light oil or condensate to Venezuela, the other is that it could load Venezuelan crude oil to later ship it to another region,” Oil Price reported.

Platts also didn’t rule out the possibility that the tanker may have incorrectly entered the destination by accident.

and this aid, coming from a country that has 1/4th of her population homeless and more than 50% on the verge of hunger that barely make it. I remember when Chavez was giving heating oil to the american poor so they dont die from winter while their governments was watching them freeze to death. Hypocrisy at her highest .

This what Guaido and his CIA handlers boycotted, because it wouldn’t give them the Hegelian results that they want:

Article 347: The original constituent power rests with the people of Venezuela. This power may be exercised by calling a National Constituent Assembly for the purpose of transforming the State, creating a new juridical order and drawing up a new Constitution.

Article 348: The initiative for calling a National Constituent Assembly may emanate from the President of the Republic sitting with the Cabinet of Ministers; from the National Assembly, by a two-thirds vote of its members; from the Municipal Councils in open session, by a two thirds vote of their members; and from 15% of the voters registered with the Civil and Electoral Registry.”

– Constitution of the Bolivarian Republic of Venezuela/Title 9 –

“If a US official or other citizen colluded with a foreign power, declaring himself or herself interim US president, they’d likely be arrested and charged with sedition or treason.

An individual charged and convicted of seditious conspiracy to topple a sitting US president or government would face up to 20 years imprisonment.

The Constitution’s Article III, Section 3 calls treason “giving aid and comfort” to the nation’s enemies, a crime more serious than sedition. The punishment for treason in America is life imprisonment, parole possible only after incarceration for 40 years.”

US ‘Humanitarian Aid’ = guns and terrorists.

I thought that Washingtoners have learned some listen from Afghanistan and Vietnam wars, but they couldn’t. Washingtoners will do the same mistake again and again.

So, according to a Russian politician quoted by the Moscow Times “Guaido won’t be so bad for Russia”. If that’s current Russian thinking, then Russia’s doomed to oblivion. Or perhaps it’s just the Moscow Times.

“The Moscow Times is an English-language weekly newspaper published in Moscow, with a circulation of 55,000 copies. The Paper is owned by the Dutch foundation who are located in the Netherlands.”

Ta for the elucidation.

No chance that the partially loaded tanker from Saudi Arabia is heading to Venezuela “by accident”. An interesting development.