On May 23, workers of the national railway operator SNCF decisively voted against French President Emmanuel Macron’s plan to reorganize the railways in an internal ballot organized by labor unions, Reuters reported.

“This vote totally discredits the SNCF management,” the head of the General Confederation of Labour rail division Laurent Brun said. “It would be a mistake to ignore this warning.”

The government has criticized the ballot as an illegal petition.

On May 22, more than 15,000 people took the streets of Paris and other 140 French cities to protest against Macrons’ economic reforms. The demonstrations resulted in violent clashes between protestors and police.

The French government has pledged to cut 120,000 government administration posts to reform the economic system of the country. One of the major issues is the reform of the SNCF by the time Macron’s term ends in 2022. Under the reform, the railway workers will be restricted in guarantees and salary as the government intends to end up the SNCF monopoly.

The railway workers started strikes on April 3, carrying out two-days protests every five days until June 28.

On April 17, Macron won a convincing victory in the French Lower house when his SNCF reform bill had passed by 454 votes to 80.  The French Upper house is due to vote on it in early June.

On May 1, about 1,200 protesters turned up on the sidelines of the annual May Day demonstration by labour unions. Police used water cannon and teargas against protesters who had smashed shop windows, hurled petrol bombs, fired up cars.

On May 25, French Prime Minister Edouard Philippe is to meet with the unions and respond to proposed improvement to the draft bill.

Wahahaha You French Scum….Now you Will listen to Me The Great Emperor of Jupiter and the rest of the Universe… moi… Emmannuelle Macroni du Rothschild…. I will go Harder on your Asses then a Spanish Emperor on them Catalunians… 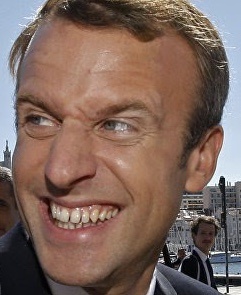 with all his inner beauty

Wish one could get 1500 let alone 15,000 people to lrotest against government programs in US.
Oh don’t get me wrong we get 50,000 or more out in just one city and thousands more who protest in favor of males, (not men) getting to use little girls bathrooms, and gays getting married, and of course many many he/she’s protesting against guns.
Never to protest billions of tax dollars disapearing, presidents and congressmen whose salary can never explain the millions they have in banks here and off shore.
US unions are now part of management and help keep workers demands into 5 minutes for time to go pee, while inflation makes paychecks buy less.
Keep waiting for someone in US to speak truth, then again , sheep never protest being herded, sheared, and then led to slaeeughter.
And old sheep, let em die.
Someday?

paul ( original )
Reply to  Hide Behind

But they will be happy as they can use the gender fluid toilet on the way to the slaughter room. The only comfort in this is that if they are that stupid ( and they are) they hardly deserve to exist at all.

Hide Behind
Reply to  paul ( original )

The problem; we are ending (possibly) the existence of many others, and the psychotic who lead US will not be saifisfied until the worlds survivors of their policies become just as, (not stupid as stupid means some brain capacity) but brain dead as is most of America.

paul ( original )
Reply to  Hide Behind

I am just a ordinary person who basically just wanted to get on with his life. Never for a moment did I ever imagine I would be living in a world like the one that now exists. Things that are happening would have been unimaginable in my youth. When I use this word ‘unimaginable’ I mean it literally in that it just would not have been possible for me or any of my contemporaries to conceptualize a world such as the one that now exists.
What was unimaginable was the absolute squalor and depravity. Basically Hide Behind I am in despair.

Nexusfast123
Reply to  Hide Behind

The US is doomed.

Hide Behind
Reply to  Nexusfast123

The US is not real in a physical sence, we the people are real, and that made up title, US, will continue, while we of the vast majority of people are doomed to a continuing decline of economic well being and loss of personal “Liberty and Freedom”.

It is both obvious and well know that all France’s problems can be
immediately solved by brining in ten million Sub-Saharan African
‘immigrants’ . In fact all Europe’s problems disappear once a
hundred million such people are resettled there. Well that’s what
they think in Brussels anyway. Aren’t you just overjoyed at the
rosey world we all have to look forwards too?

It is scientifically proved
that smaller problems can be easily resolved by….. creating bigger problems

Yes of course I was forgetting this. Silly me.

Here is an example of what you speak.
Here in Oz, we had trouble with beetles eating sugar cane, so they imported toads to eat the beetles. Those toads have spread like wildfire and because they are toxic, they have decimated Australian wildlife.

Easy as pie.
You just have to bring in some million people from war regions like Syria, Iraq, Afghanistan, Yemen,Sudan, and such places and paid them to catch those toads.
And you have to bring enough Chinese to cook them and eat them.
Because everybody knows they eat everything.

Now we import useless people to collapse incomes so the ‘C’ level wankers can make more profits and reward themselves for their utterly minuscule intellectual talent.

The French people need to dust off the guillotine, Liberty Equality Fraternity.

The French have finally realised that they are being subjected to the globalist neoliberal economic perversion. Bend over and take it or fight.