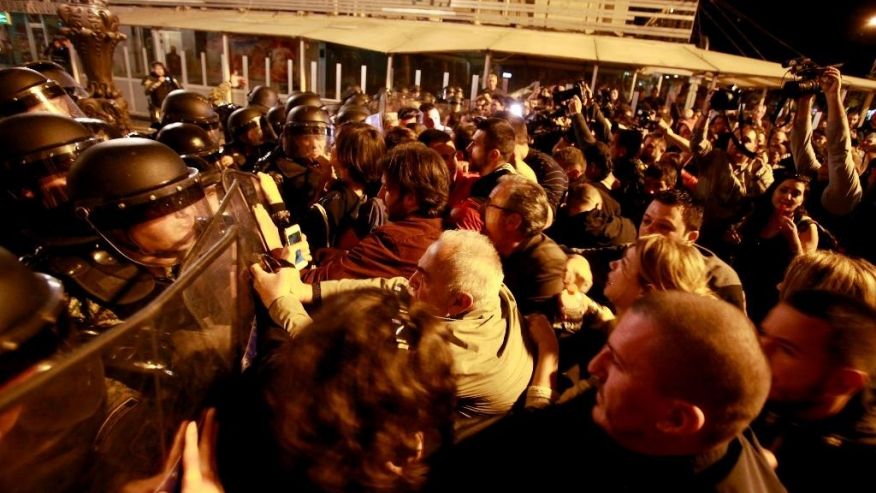 Participants in mass protests in the center of Skopje smashed the public reception lounge of President Gjorge Ivanov, they smashed the windows at the Ministry of Justice and collided with the police. The big crowd of protesters was made ​​up largely of supporters of the opposition Social Democratic Union of Macedonia. They caused significant damage to the office of the Macedonian President. The demonstrators chanted “If there is no truth, there is no peace” and “Immediate resignation”. They threw eggs, plastic bottles and firecrackers at the windows of the presidential reception.

The protesters got into the building, and removed the furniture and documents and then began to burn them. The campaign came about, because of the president’s decision to terminate the criminal justice undertaking with respect to former and present officials who are suspected of tapping the phones of more than 20 000 citizens in the country. In the course of the unrest there have been reported a number of injured, including journalists. Special Forces police have arrested several activists, but the crowd reacted violently and attacked the police.

The Social Democratic Union has submitted to the parliament a request for the impeachment of President Gjorge Ivanov, as well as a request to hold an extraordinary meeting. The president explained his decision to terminate the investigation of those accused of organizing the mass wiretapping by stating: “I decided to finally put an end to the agony suffered by the whole of Macedonia”. But the leader of the Social Democratic Union Zoran Zaev, insists on the resignation of the president: “We want Gjorge Ivanov to resign. If he fails to do so, this would lead the country to the brink. This is a coup d’etat and we have to stop it.”

Among the 56 “pardoned” are senior functionaries of VMRO-DPMNE, the former Prime Minister Nikola Gruevski, the director of national security and counterintelligence Sasha Mijalkov and the head of the Ministry of Interior Gordana Yankuloska, the President of the Albanian national Party DPA Menduh Thaci and others. We remind that in February 2015, Zoran Zaev accused Macedonian Prime Minister Nikola Gruevski of illegal wiretapping and spying on at least 20 thousand people. Previously Zaev himself was accused of helping foreign intelligence services and attempting to overthrow the Macedonian government.

The protests in Skopje began on Wednesday at 6:00 pm, and at first had a peaceful nature. Toward 10:00 pm the emotions took over and the pogroms began. According to news agencies several thousand people have participated in the protests. The protest started from the building of the Prosecutor’s Office on Tuesday and Wednesday, then the demonstrators headed to the president’s office, and then they attempted to attack the offices of the ruling party VMRO-DPMNE. Today, the protests violently continue, and the police are preparing to use water cannons against the demonstrators.

Ecumenical Patriarch Struggles To Unite His Supporters Over ‘Ukraine Question’

Macedonian Police Used Tear Gas to Migrants, There are Injured

New threat on the Balkans: ISIS is on the rise

About time for some more demonstrations, the people of Macedonia had to put up long enough with that criminal government. Every country has some mafia, with Macedonia the mafia owns a country.

Nice to see that those who fight against the Anglozionist Empire and the Imperialism , accepts that the false state of Skopje is named Macedonia as the Anglozionsts and German and Turkey wants … Only Alexander the Great and his grandgrand fathers and ancestors and Macedonia were and always will be Hellenes . Really anyone from this pseudostate who claims the Macedonian heritage , knows what Macedonia means ? What Philippos means , what Alexander means ? NO because it is Hellenic language … These Slavic tribes who came to live on lands that were 1000 and more years ago lands of Alexander’s Macedonia have no right to claim our HERITAGE …

Even you name ΙΩΑΝΝΙΝΑ is of Slavic Origin. JANINA

Little bit more info: Zoran Zaev is among those pardoned by the President because he’s also under investigation for criminal activities.