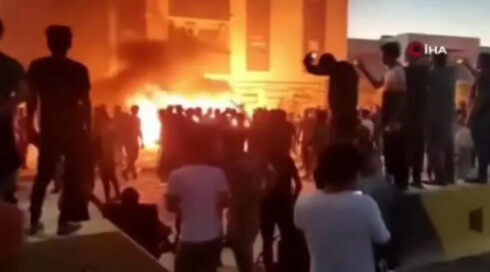 On Saturday, a month-long state of emergency was declared in the former Soviet Republic of Uzbekistan, in response to violent protests in response to government plans to revoke the autonomy of the north-eastern republic of Karakalpakstan , a decision which Uzbek President Shavkat Mirziyoyev would later drop following a visit to the region.

Despite the current disturbances only starting several days ago, their sudden escalation to extreme violence, as well as the coordinated coverage of the situation by corporate media outlets, including the US government-funded Radio Free Europe, already bears all the hallmarks of a CIA regime change operation.

Indeed, such a situation was predicted by Belarusian President Alexander Lukashenko in January of this year, when a similar regime-change attempt was taking place in Uzbekistan’s larger northern neighbour Kazakhstan.

This attempt, carried out in line with a May 2020 document published by neoconservative think tank the RAND Corporation, sought to destabilise the central Asian Republic in order for the after-effects to spill over into neighbouring Russia, with the 7,000km land border shared between both nations being the second largest in the world after Canada and the US.

Following the deployment of the Moscow-led Collective Security Treaty Organisation (CSTO) to Kazakhstan however, at the request of Nur-Sultan, the Western-backed colour revolution attempt was quelled in the space of two weeks, with the military alliance withdrawing from the central Asian country soon after.

Belarus itself had experienced a colour revolution attempt in August 2020, when following Lukashenko’s Presidential electoral victory over opposition candidate Sviatlana Tsikhanouskaya, a Euromaidan-style colour revolution was launched against Minsk, the former Soviet Republic being a long-time target for the regime change lobby owing to it being Moscow’s sole European ally, having highly-nationalised state industries, and the instalment of a pro-Western government resulting in Russia’s entire Western border being composed solely of NATO-members and allies.

Indeed, the encirclement of Russia was a motivating factor in the aforementioned Euromaidan colour revolution launched in response to then-Ukrainian President Viktor Yanukovych’s November 2013 decision to suspend an EU trade deal in order to pursue closer ties with Moscow.

Violent protests would rock the eastern European nation in the aftermath, centring on Kiev’s Maidan Square, where neoconservative US Senator John McCain would infamously address demonstrators.

This violence would eventually culminate in the predominantly ethnic Russian Donbass region in the east of the country breaking away to form the independent Republics of Donetsk and Luhansk in April 2014, the catalyst for which being the anti-Russian far-right sympathisers who would take part in the Maidan movement, and who would also play a key role in the post-coup Western-backed coalition government of Petro Poroshenko.

An eight-year long war on both Republics would follow, involving the use of neo-Nazi paramilitaries such as Right Sector and Azov Battalion, and leading to an estimated 14,000 deaths.

Despite attempts by the Kremlin to diplomatically resolve the situation via the Minsk Agreements, which would see both Republics granted a degree of autonomy whilst still remaining under the rule of Kiev, Moscow’s hand would ultimately be forced in February of this year when a military intervention was launched into Ukraine.

Almost five months of global condemnation and sanctions towards Russia have since followed, however this has done little to hinder Moscow’s goals of removing the neo-Nazi elements involved in the ethnic cleansing campaign in Donbass, and destroying any Ukrainian military infrastructure that would ultimately have been used by NATO had Kiev gone on to become a member, the alliance having failed to honour a post-Cold War agreement not to expand eastwards.

Indeed, less than 24 hours after Uzbekistan’s state of emergency announcement, Russian Defense Minister Sergey Shoigu announced that the Luhansk People’s Republic had come fully under Russian control, highly coincidental timing that suggests that the current strife in Uzbekistan has been orchestrated as a means to eventually lead to further destabilisation along Russia’s southern border, just as Lukashenko predicted.

Uzbekistan would have been the Capitol of the New World Order if the WEF and Multinationals achieve their goals in Uzbeks… people never realized what higher spheres of influence use them to get their goals…. blood is like the wine unconcious all the time and this could happen to any of us and our Goverments… if you felt sleep something will take advantage of you.

And still killing civilians from Syria to Yemen on a daily bases. US is a bloodthirsty leech on humanity. Americunts are dehumanized racist savages and have brought nothing but misery to the world and their own brainwashed moronic population. That is is main reason the world is cheering for a Russia victory against these NATO scum.

US is only supporting freedom, Nato is a peace organisation, and you know it.

I’m American and don’t agree with general slandering of every person here. There’s so many American’s that equally dislike government and what it does, but I do agree totally that NATO needs to have it’s claws re-moved and moved into the dust bin of history. All NATO does is create new wars for U.S. contractors to sell weapons for and make corrupt politicans here rich. It’s very important Russia is victorious in Ukraine because the world needs to normalize and stop this sectarian division–European nations want to partner and trade with Russia like any other nation but the blood-thirsty American/EU war machine and their lap-dog politicians won’t have it. They need their ‘big bad guy’ to sell to the public….which are easily manipulated by the media they also own.

Once Russia collapses Ukraine and the CIA gets their balls chopped off by a sanctioned drastically less funded and capable military like Russia against U.S./NATO meddling they’ll be taken down a peg and EU nations will lose confidence in the whole arrangement….NATO and EU need to crumble just like the Soviet Union dissolved in 91.

To be honest, these Stans are corrupt and ungovernable as the American criminals and NATO vassals are using them as test tubes against Russia. Their only hope is reintegration back into a unified Russian Federation. None of these basketcases from Georgia to Ukraine can survive on their own.

Give Kazakhstan to Russia and the rest to Iran.

racist drivel—Azerbijian rich in resources, Kazakstan rich in oil and gas—uzbekistan thriving….kyrgizia Armenia Turkmenistan Tajikistan more challenges mainly due to post soviet disputes that would not have occurred prior to 1990

Let me explain better this topic, i did not explain in the above comment. WEF, NWO and Billonaries in the West wanted to achieve a coup d’etat in Uzbekistan (change of goverment) because it will help USA Goverment in their attack against Russia, Uzbekistan is not tha Main Objective and the High Goal, its Russia the main objective…. you can see now, the Liberal Radical Order (New World Order, and World Economic Forum) in the West, are im Open War against Russia but it is also in cover war against USA Domestic Population who are against them (citizens in USA are uncovering and revolting against Democrats policies lately). The NUT Cases in the WEF NWO suffering from brain insanity will not retreat and will not capitulate at any cost, they think they can win and enslave all of us using their GOOGLE, and the Internet in Mass surveillance worldwide, offering us the MULTIVERSE instead of Reality… they will try to kill us but if they lose and end with our sword in their troath they will claim for mercy… but none of them would have mercy on all of us, they are mass murder and Hitler is a kid compairing to them.

You said that well. The common everyday people in the US and other Western countries are about as free as those in, say China, perhaps? Many choices, but with limitations, laws, regulations, taxes and more. I haven’t pinpointed when the US turned, but it is evident it was a long time ago. Perhaps going back as far as Woodrow Wilson’s presidency, when fascism took early root here. It’s a slow creep into an abyss. The historic US that was friendly with Russia ceased to exist some time ago. So sad, so much opportunity for mankind squandered by the greed of a few thousand individuals running and ruining everything. I believe Russia is the best hope we have for a freer world, the lesson of Fatima is emerging, why so many years we Catholics in the west prayed the Rosary for the consecration of Russia. I think it worked. Many in the West, who think and learn know, and quietly cheer the RF and allies. No one is absolutely free, but there are big differences among nations. At what point does Fascism turn to Nazism? Maybe those are worn out terms. It could be said when the killings begin, I suppose.

thoughtful
Reply to  Sgt. Based

and their lives guillotine

This will end badly for the government, because they will have to pick between RUSSIA and CHINA to stabilize the situation..

They won’t have to pick between Russia nor China. They simply need to pick if being a western prostitute is worth the destruction chaos and ultimate demise of their people. Ukraine is the perfect example of what not to do.

The US true to form is a dirty butt.

but i think we may have scared poor Jens away. He does add entertainment value through his comical ways.

he is a spoilt overclass bilderberger brat

They came,they saw but then failed to implement eugeddon law resolutions,another Russia/cis victory 520 mass arrests saw to that fact! =Z=

Kill who, the people? That is the wrong move that Zion-Yanuqis-Anglo fuks want. Remember Ukraine? Who killed the stupid people? Neo-Nazis in UA were fully supported by the West.

The government should go after NGOs in Uz and finish off any person who is linked to US groups such as Oslo Freedom Forum or US National Endowment for Democracy (NED).

Regime change is not a new thing in the world, the Middle East (Arab spring), Ukraine (Pro-democracy), HK which failed, and a lot more. They are using the same tactics as before for Uz as well.

It seems that the only answer to regime change operations is resistance of a military nature. The Yanks need to be taught a lesson that they won’t forget.

So peoples do not anymore have the right to uprise, only if they are puppeetered by the CIA? Get lost “color revolution” reactionaries! Revolution is a human right.

Isn’t Uzbekistan simply not in a viable position for the US to supply any insurgents there? Their embassies can pay people to break cash machines and set dumpster fires all they like but there is no conduit to actually send assault rifles or ATGMs. Such an uprising would be eliminated.

The directors of ProtonMail were ALSO politically aligned against Lukashenko in Belarus in 2020, though ProtonMail was claiming to be a force for freedom and openness. They were writing anti-Lukashenko pro-color revolution newsletters and sending them out.

Correction: Karakalpakstan is in the north-western part of Uzbekistan. Check your map.

the US- CIA would fuck up an anvil. conquering the world may be beyond their capacity