On August 30th, an aide to Belarusian President Alexander Lukashenko announced that a new constitution was currently being worked on.

The aide was called for peace, though Lukashenko continued his cosplay of Colonel Kurtz from Apocalypse Now by moving around the Independence Palace in Minsk with an assault rifle and wearing a bulletproof vest.

The photograph below was provided after the President’s aide was asked about Lukashenko’s whereabouts. 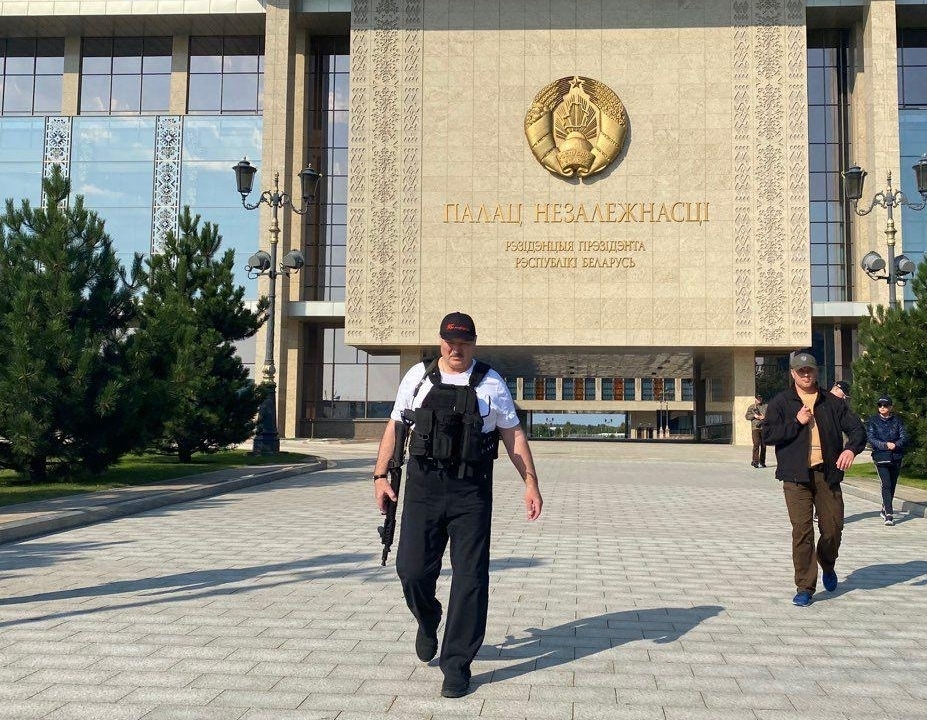 There was no photograph of his son Nikolay Lukashenko, who last week was also given a pistol, an assault rifle and a bulletproof vest. He’s 15 years old.

A crowd of protesters that assembled outside the home of the president in the Belarusian capital had the opportunity to talk face to face with one of his aides, Nikolay Latyshenok.

The news they got, however, were that the presidency deems the elections “far” and that they were simply working on a new constitution.

There were protests in front of Independence Palace, around Minsk itself and in other cities, with tens of thousands taking to the streets.

A video was shared on social media showing a group of protesters damaging a police vehicle and then a scuffle taking place on the street while they try to escape.

The protesters came close to the cordon of riot policemen standing near Lukashenko’s residence in Minsk and chanting slogans. The security forces did not react, they just stood there and didn’t allow anyone in.

Regardless, in just two hours on August 30th, 125 people were arrested for attempting to damage public property or carry out various provocations, the Belarus Ministry of Interior Affairs said.

It is allowed to add what You have or dont see.

They could do much worse than that…. Deaf, dumb and blind with cognitive disorder would be their choice preference. Or permanently drunk like Yeltsin would do as well

Turk ASS LICKING bastard you and your faggot boyfriend Zionism=EVIL can go fuck yourselves!

Of course shithead faggot I am desperate over 2 back stabbing Turk ASS LICKING prostitutes. I will not be able to sleep this evening.

Get some salty snack and vodka, will sleep like a baby. i assume you are closely familiar with that combination:))))

fuck of TURD supporter !!! Lon live Assad !!! Long live free Syria !!! Out all those that are not defending Syria any more but using it as ground for attack on IsraHell instead!

Even Lukashenko says 20%. Do You only have one eye?

Thats how You make the deep dark state.

First You tell lies and next confirm it many times until You believe it Yourself. And finally You blame everybody else for Your deroute.

Dude he faked the results !!! Don’t you realise that?

It is simple mesage…..” i am not Gadafi or Sadam or Čaušesku ,i am ready for dogfait”