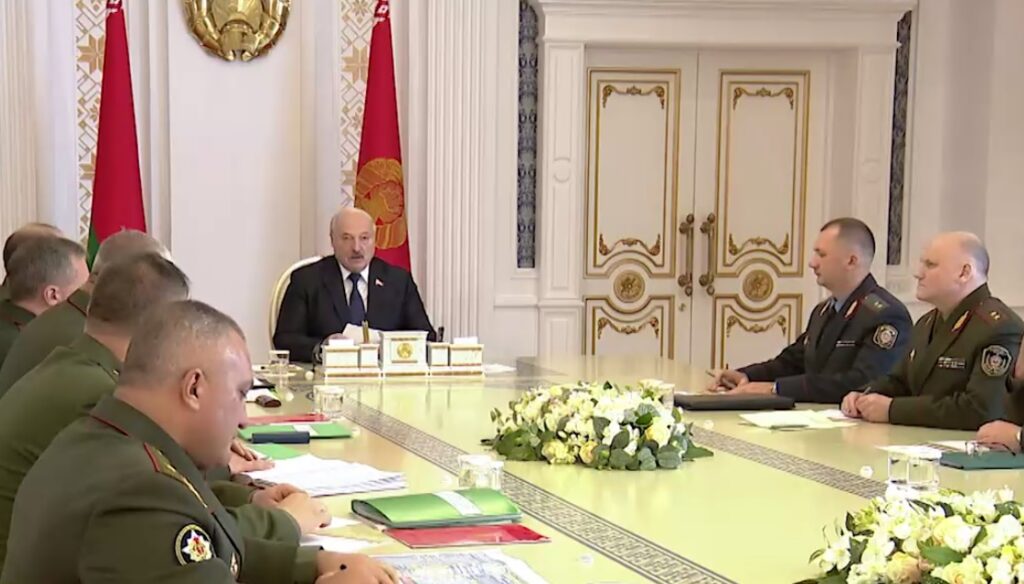 Belarusian President Alexander Lukashenko said that Belarus and Russia are activating a joint regional grouping of troops in the region.

“Due to the aggravation on the western borders of the Union State of Russia and Belarus, we have agreed to deploy a regional grouping of the Russian Federation and the Republic of Belarus.”

It is expected that this grouping may be engaged in the nearest future.

The basis of this grouping is formed by the Armed Forces of Belarus.

“I have to inform you that the formation of this grouping has started. It has been under way, I think, for the past two days. My order was given to start forming this grouping,” said Lukashenko.

He noted that since most of Russia’s troops are currently busy with the ongoing conflict in Ukraine, the core of this joint force will consist of the Armed Forces of the Republic of Belarus, but there will nevertheless be “more than one thousand Russian soldiers.”

He also claimed that Kiev is currently planning to carry out attacks against Belarus and is being pushed to do so by the West.

“Kiev is not just discussing, but is planning an attack on the territory of Belarus. Of course, the Ukrainians absolutely don’t need this. Why would they open a second front on our southern borders? What for? This is complete madness from a military point of view,” Lukashenko said.

“But, nevertheless, the process has begun. They are being pushed by their masters to start a war against Belarus to pull us into the conflict. To simultaneously deal with both Russia and Belarus,” he said.

According to Lukashenko, Minsk has already been warned through “unofficial channels” that an attack on Belarus from the territory of Ukraine is imminent. He claims that Kiev is threatening to carry out a series of attacks on Belarus and has already amassed up to 15,000 troops near the border.

Lukashenko once again warned that Minsk would respond with dignity to any adversary.

“We have been preparing for this for decades. If necessary, we will respond. God forbid, of course.”

The Belarusian leader said that Kiev had threatened him with a “Crimean Bridge 2” referring to the recent attack on the bridge connecting mainland Russia with the Crimean peninsula, blamed by Moscow on Ukrainian special services.

“My response to this was simple,” Lukashenko said. “Tell the President of Ukraine and other lunatics that the Crimean Bridge will seem like flowers to them if they touch even one meter of our territory with their filthy hands.”

Russia is a paper tiger

Kkkk lukashenko is threatning to pee pee since february… Whats holding HIS pants? Putin has HIS mouth Open for Seven months and keeps waiting. Bad lad

DogFart
Reply to  Russia is a paper tiger

President Alexander Lukashenko is right not to trust the nato nazi scum. To the nazis in nato, publically supporting President Putin will make one a marked man. If the nazis of nato can take it, they will.

The people of Belarus are fortunate to have a good leader. If the people don’t act dumb and allow nato another Maidan type gov’t overthrow, the country will breeze it.

Poor little crying Zelensky and Nato….they played with fire and got burnt

Oh now that Ukraine is preparing to attack him he cares. Until now he wanted to wait and see who wins to switch sides…

Putin should have not saved him but instead replaced with a temporary polititian and new elections ind belarus (without participation of Luka and the interim government).

The British government have started food rationing at the big UK supermarkets I am at Asda one of the US biggest food supermarkets and I’ve just been told by a supervisor after attending to buy 10 packs of mixed peppers for our shop that customers are now only allowed to buy a maximum of 3 items of a large range of food products! He also told me that he would get into trouble for telling me this as staff have been told Not to discuss this with customers

Kev not Kiev
Reply to  Bobo

True that. The UK is slowly turning the heat up on us bankster occupied frogs. When we run out of cake to eat, we’ll eat conservatives, labour, lib dem, scot nat, and green party MPs for breakfast after eating all the masonic lodge cops for dinner the night before…. Delicious.

“My response to this was simple,” Lukashenko said. “Tell the President of Ukraine and other lunatics that the Crimean Bridge will seem like flowers to them if they touch even one meter of our territory with their filthy hands.” Belarus is begging Russia to let them loose on Ukraine so they can end this. Ukraine are on a bad spot. If they still have one brain cell left they better start negotiations. This is getting bad for Ukraine.

Kev not Kiev
Reply to  Thomas

Ukraine is on cocaine… and NATO unicorn piss… I expect them to double down on their stupidity, to the point, in 10 years, all the Ukrainian orphans will be learning Russian and fucking loving it, as children enjoy being raised by humans, not Rothschilds.

The Kiev regime are boxed in Russia Belarus to the east and north and the polish to their backs in the West! Don’t trust the polish government they will size large areas of West Ukraine that is their intention. Russia and Belarus can bring this conflict in Ukraine to a close quickly if they wish to do so. The Kiev regime have sold Ukraine out to the globalists and when the time comes will run off with the loot to a Swiss Bank….

The joint grouping includes specialists that can decipher Polish, Latvian and Estonian comms. After all, there are oppressed Russian speakers in those countries, which are being run by occupiers of an international terrorist organization NATO, and deserve protection from Jacob Rothschild’s banderites.