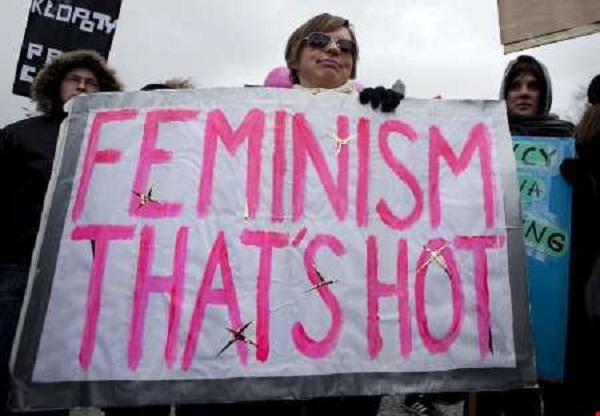 The UK government has suggested that the term “pregnant woman” should not be used in a UN treaty because it “excludes” transgender people. However, the initiative has faced an outrage from feminists.

According to feminists, the government initiative is the latest example of “making women unmentionable” in the name of transgender equality.

The crisis between feminists and transgenders followed the UK official submission on proposed amendments to the International Covenant on Civil and Political Rights. The treaty says that a “pregnant woman” must not be subject to the death penalty.

However, the Uk government opposes the term “pregnant woman” because it may “exclude transgender people who have given birth”. The UK suggests term is “pregnant people”.

The insanity over human rights in the so-called West more than ever looks like the creepy relatiy created by modern Russian writer Victor Pelevin in his anti-utopian novels iPhuck 10 and S.N.U.F.F.

Yet today, a major part of politicians and public figures in the “democratic” Europe is scared to say a word about rights and problems of the real majority of the Europeans.

Democrazy describes a Home/House “Dom-Russian/Demo-Greek(i guess;)”, Crazy “English”, that has gone MADcrazy. Isnt actually a DEMON a Spirit who hounts the house?! Well i guess it is VERY Pointing for that.

Okay, but the entity in the house is usually called the house-sprite, and is not necessarily demonic or evil

You can call me Al
Reply to  Mish

Yeah ok, Demons are not always Evil, they are from another Dimension. 4th-5th from the small knowledge ive got, i would say demons are called like this because they come into your Dom/Demo/House-Vessel-Dimension it is all connected in this sense.

All this farce would be laughable if not scary for Europeans and their neighbors. Wars in ME are dealt at 6th priority – weapons of war and physical distruction. In Europe we see ongoing work and already witness fruits of 1st priority level – methodology/ideology. In simple terms – basic what is good and what is bad ideas. This instruments take much longer to implement but their results are much more lasting and some may be irreversible in short terms. As some say – question is not about “are protocols of elders of zion fake or not” but about that fact that most of what was written about is already implemented. People go crazy about imaginary problems…yet their madness is real.

All a distraction to keep people from really thinking about what is wrong with the west: stagnating quality of life in areas of health,housing,education, jobs to live above subsistence and the ever present likelihood of being wiped out by hordes of headchoppers allowed into europe.

As for feminists they should shut up.in my country most feminists think it has been a failure: what with a woman having to work to ensure her family has a decent standard of living and all the pretty young things not caring about putting their vagina photos on facebook,tinder and snapchat etc.

Compare to pre feminist days here, one average father worker could bring home enough money to raise a family with wife as homemaker and have enough money to put all their smart children through university and have decent car,house,holidays and clothes etc.

Now both parents need uni education and working and still can not match above.

Thanks shit globalization and feminism etc

Yes this Movement was all along a PLAN to make more slaveworkers out of the Population.

Dutchy, isnt this your Utopian Future (feminism and Manginaism)? You Hollaundaise Käsfresser`s are the Pinacle of the Rainbow Revolution! Why are you not Defending this Utopian Women Fixates Noguyism?! THIS is the Present that Kills the Future.

Dutch people are hardly to blame. Holland was picked (by the global authority that controls global money and subjugated Europe following WWII) as a testing ground for a lot of forward-looking things: legal weed, those things you mention, and other forms of debauchery and perversion of the psyche. Feel sorry for them

That is why it is filled with Turks and other headchopping- types.

Its forward thinking days are from now very much over.

Western left-wing identity politics is predicated upon a hierarchy of the ‘oppressed’ and ‘victim-hood’. All based around choosing race, ethnicity, sex or gender as an individual’s primary form of political identity. Until now, the majority of western contemporary feminists have been very pro-transgender rights, as it aligns with the overarching feminist ‘subverting the patriarchy’ narrative. That is, apparently, up until the very moment that transgender rights start encroaching on the actual rights of authentic biological women. As it evidently never occurred to contemporary western feminists that the (logical) consequences of their supporting radical and marginal gender based identity politics, could actually have a real world impact upon the political status and rights of their own identity. The useful idiots in full blown action.

The West is receiving what it deserves, and may the good Lord make them truly thankful.

You cannot make this crap up, can you ?.

“You bastard, now you want to make women unmentionable”

ABORTION RIGHTS IN ALEPPO AND OMAR!!! (pregnant people is the correct term, but they have no special exemption from execution since fetuses are not human.) however criminals are almost always also witnesses, thus executing them constitutes destruction of evidence, All murderers are like Oswald, for example. (Austin and Chord)

As sad as it is I just want them to get utterly fucked now, they deserve it, all of europe. Only then will they wake up

They can now ban all femininists groups and studies etc and arrest and imprison them all as a hate groups. because they exclude transgendered. The logical course of anti democratic racist supremacist Jewish hate laws.

I knew it was just a matter of time before these two extremist hate groups started to fight between themselves.

All we men need is to wait until women come begging for us to protect them from the sick pederasts.

And as a matter of fact it is already happening.

Yes now it is legal for rapists to dress up as women to go and pick out their victims in the women’s washroom and if the coast is clear, they can just rape them right there as they will literally be catching the women and children with their pants down.

It is the nature of Identity politics. To defeat democratic unity of the people you need to make them identify with something that they are (gay, lesbian, black etc.) and then you turn the people on each other. This is how national unity is under attack everywhere.

Pro choice they say. ‘Pro choice’. When the logic behind their choice is questioned this line will be used. Not a clever way to sidestep the issue being them not thinking enough. When the choice is wrong who will be blamed for them ?