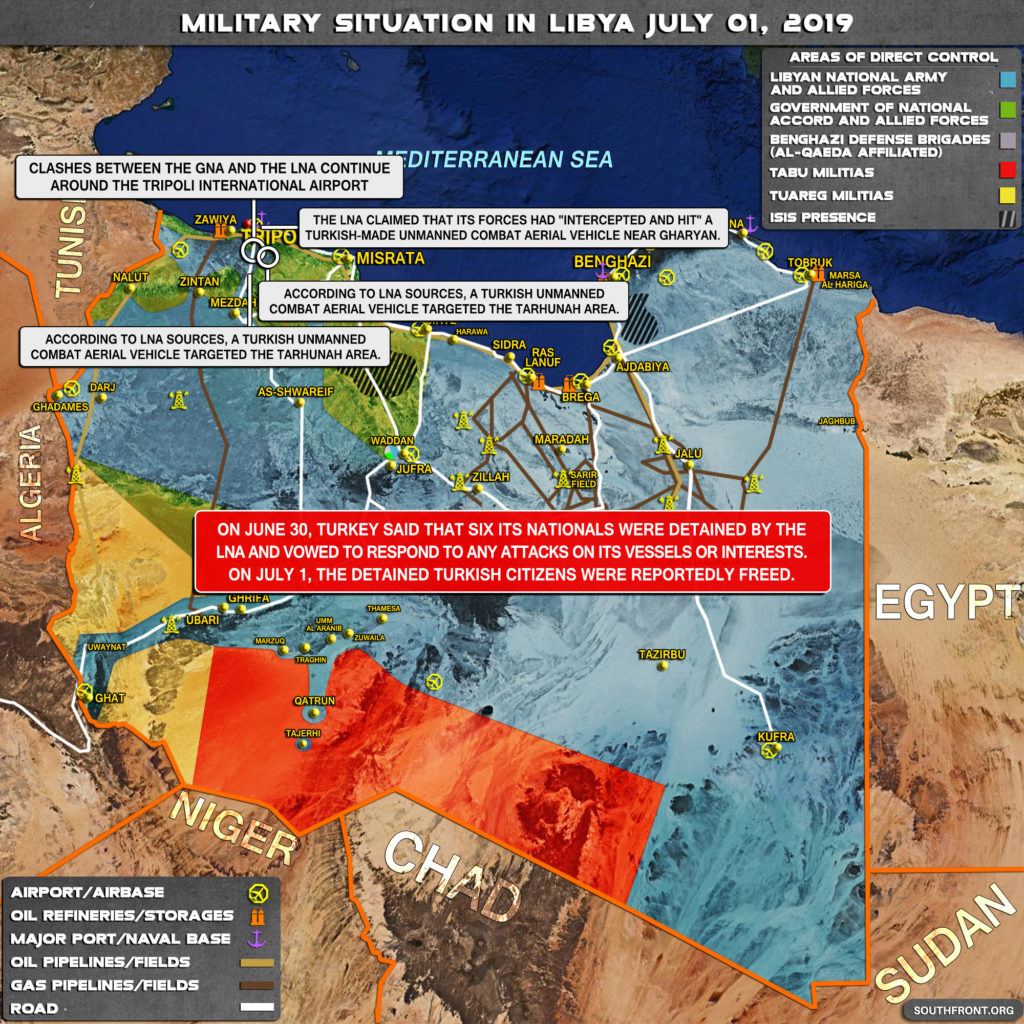 On July 1, Turkey’s Foreign Ministry spokesman said that 6 Turkish citizens, who had been detained by the Libyan National Army (LNA), were released.

The interesting fact is that the Turkish side claimed that those released wanted to keep working rather than return to Turkey. Ankara described the released persons as crew members and denied that any military personnel were detained.

The LNA controls much of eastern and southern Libya. In April, the LNA launched an offensive to retake Tripoli from pro-GNA militias.

These Turkish Army Generals/officers….when they are really in Libya, they definitely not walk around on the Battle Hot Spots, so that they can catched by LNA. They are probably in a fortified Comand HQ Bunker in Tripolis.

You can call me Al
Reply to  Ayman

Maybe they were dispelled from the Turkish forces (after the coup) and now want to fight Erdy’s new men wherever and whatever.

Ayman
Reply to  You can call me Al

They are officially still active in Turkish Armed Forces. One guy, a General on the list, is the Head of the Military Intelligence Unit of TAF.

Head of Turkish Intelligence in Libya, yes well one can see why Haftar is upset at Turkey getting involved.

He shouldnt have raised to the bait with some smeared honey around his mouth by its Saudi and UAE masters, to start the Tripoli campaign. If just a couple of Turkish Generals and UAVs make so much a difference, then he should think what happens when Turkey sends a Navy Battle Gruop and Jets to help GNA.

Head of Intel., suggests there is much more Turkish involvement than just a couple of generals. Generals only go where there are orders to be given…..Wonder how they were apprehended. Doubt Erdogan would send jets or a ‘Navy Group’, too costly. You think Haftar is beholding to the Saudis and UAE, that is possible, at least for some cash, but Egypt is my bet as far as real backing.

Most probably Turkish Officers/Generals make the coordination of Tripoli Militias Offensive/Defensive and help with tactics and planing. Haftar should not count that Erdogan will be quenched by costs…. He cant afford looking weak against a little Warlord.

Haftar is far from a “little Warlord”, more like a Head of State. He previously had captured most of the Libyan oil and gas fields giving him a steady cash flow.

Guess that Erdogan wants those fields and its income.

Does he have the money to pull this power play. Qatar does, but its still a big gamble….The US must be backing him, this will become an expensive war.

Looks like peace will be a long way off for Libyans.

If you look what Iran is able with its broke economy, then i guess sending a Navy Group with cargo ships with a shit load of weapons for GNA, is quite possible for Turkey.

There were no military units detained, only normal people, stupid arabs with propaganda

Lol normal turks in thousands kilometers away in a civil war zone!! Haha all know turks are recruiting terrorists there.

No mention of the CIA pilot the LNA shot down?