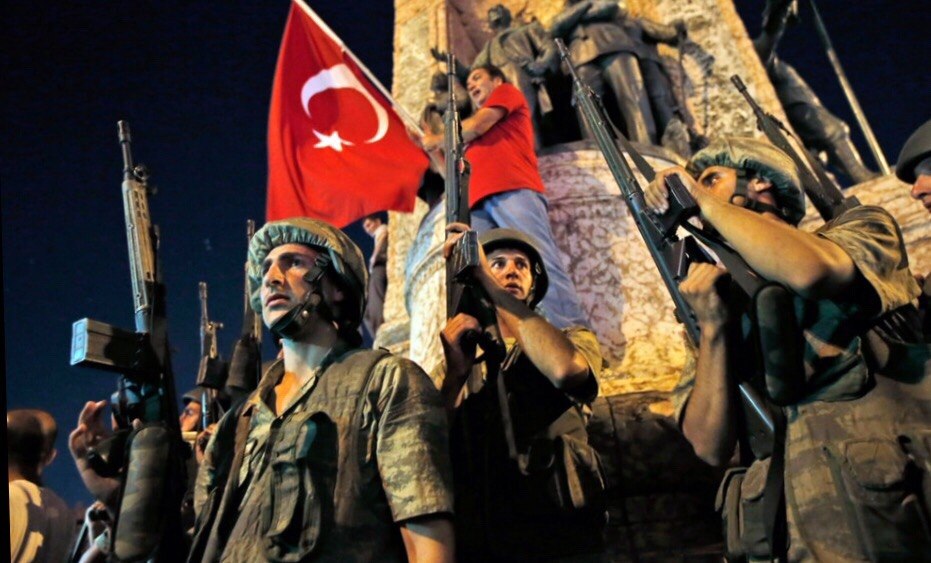 SouthFront has finished the #TURKISHCOUP Live. Thank you for the attention.

Since yesterday, Turkey has been in complete chaos. The military has attempoted to take over the country. However loyalists were able to fight back. As result, the coup failed. However, operations are ongoing.

The Turkish Prime Minister has said that First Army Commander Umit Dundar has been appointed as Chief of General Staff.

Erdogan has said the coup is “over.”

Why did the coup failed? READ HERE

Turkish prosecutors have issued arrest warrants for 140 Constitutional Court members and 48 members of the Council of Stat.

Turkey’s top judicial body HSYK lays off 2,745 judges after extraordinary meeting. 11 Supreme Court members and 4 members of Judges Committee are arrested because of alleged links to the coup attempt.

Reuters has reported that some 100 pro-coup members of the armed forces had been detained at the Diyarbakir air base in southeastern Turkey.

According to US Secretary of State John Kerry, Washington hasn’t received any extradition requests for Muslim cleric Fethullah Gulen, who currently resides in the US. Earlier, Erdogan had blamed Fethullah Gulen of instigating the coup.

The Embassy of Belgium in Ankara and the Consulate General of Belgium in Istanbul has been closed. The Bosporus strait has been re-opened to transiting tankers.

Media reports suggest that the coup was led by Akin Ozturk, an ex-Commander of Turkish air force. 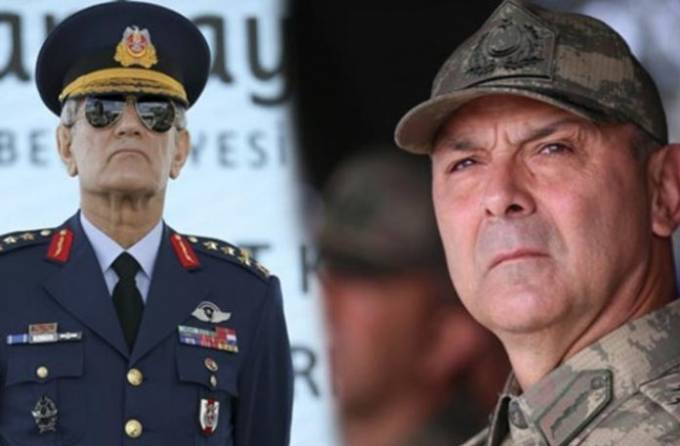 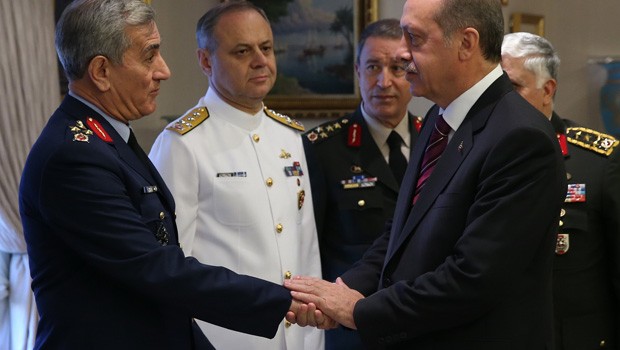 The Turkish Prime Minister Binali Yildrim has said 265 people have been killed and 1,440 wounded in the coup attempt. He added that over 2,800 members of the armed forces have been detained and emphasized that the situation is “fully under control.” 10:37 am CET Anadolu Agency says pro-coup soldiers that have taken over the Chief of General Staff Headquarters are trying to negotiate to surrender. This is the last known base where coup supporters remain in control.

10:24 am CET Anadolu Agency: The airspace over Turkey’s northwestern Marmara region has been closed to civilian flights. Russia is concerned about the military coup attempt in Turkey. Russia’s Foreign Ministry:

“The worsening political situation, as well as existing terror threats and regional armed conflict, pose increased danger to international and regional stability.” Moscow is ready to cooperate with the “Turkey’s elected leadership.”

9:38 am CET The Turkish General Staff has reported that over 100 coup supporters had been killed.

9:20 am CET According to unconfirmed reports, over 100 people have been killed

Abandoned armoured vehicle in the middle of main road in #Istanbul . #Turkey pic.twitter.com/1UIBJe4r97

8:17 am CET Anadolu Agency says 200 pro-coup soldiers at military HQ have surrendered to the Turkish police. Death toll rises to 90 killed with 1,154 wounded. More than 1,500 military personnel arrested according to Turkish officials. 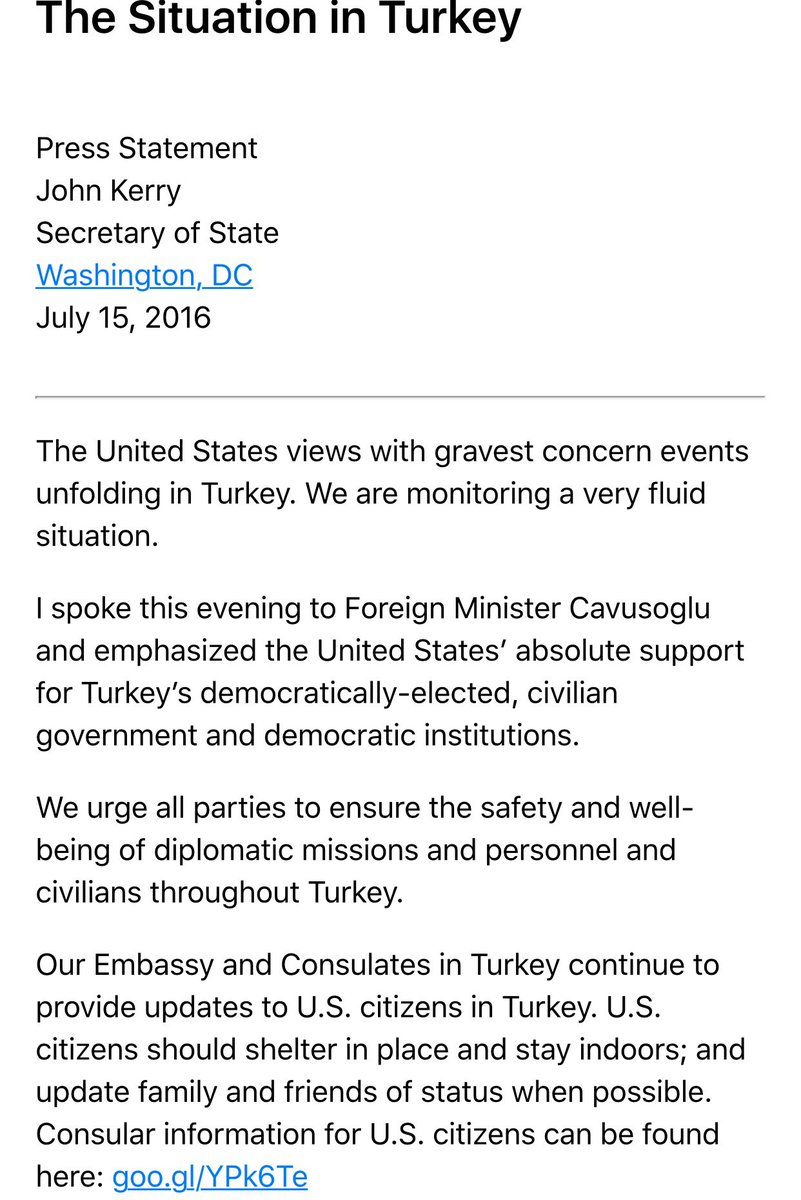 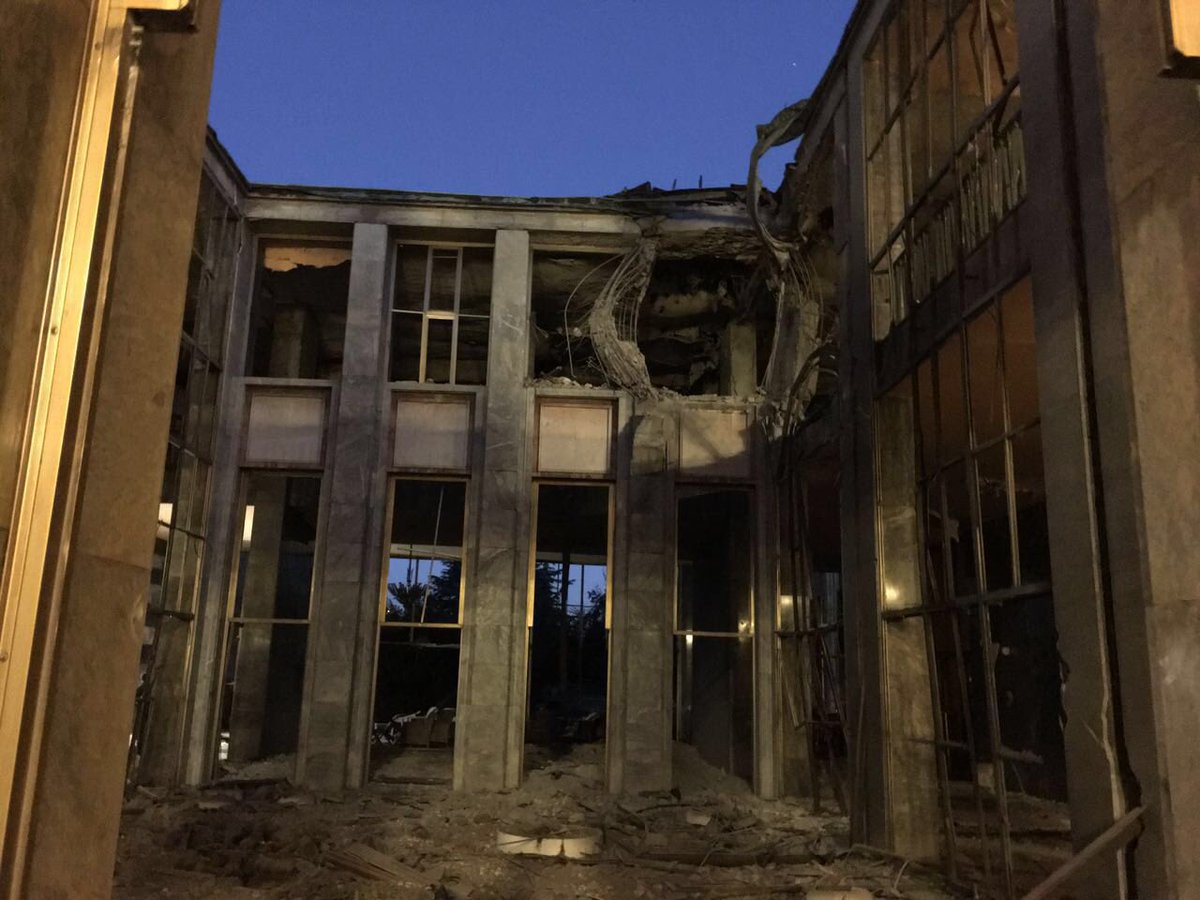 6:36 am CET 16 pro-coup soldiers  have been killed, 250 detained at the Gendarmerie Command in Ankara’s Beştepe district. 6:28 am CET What we know by now: 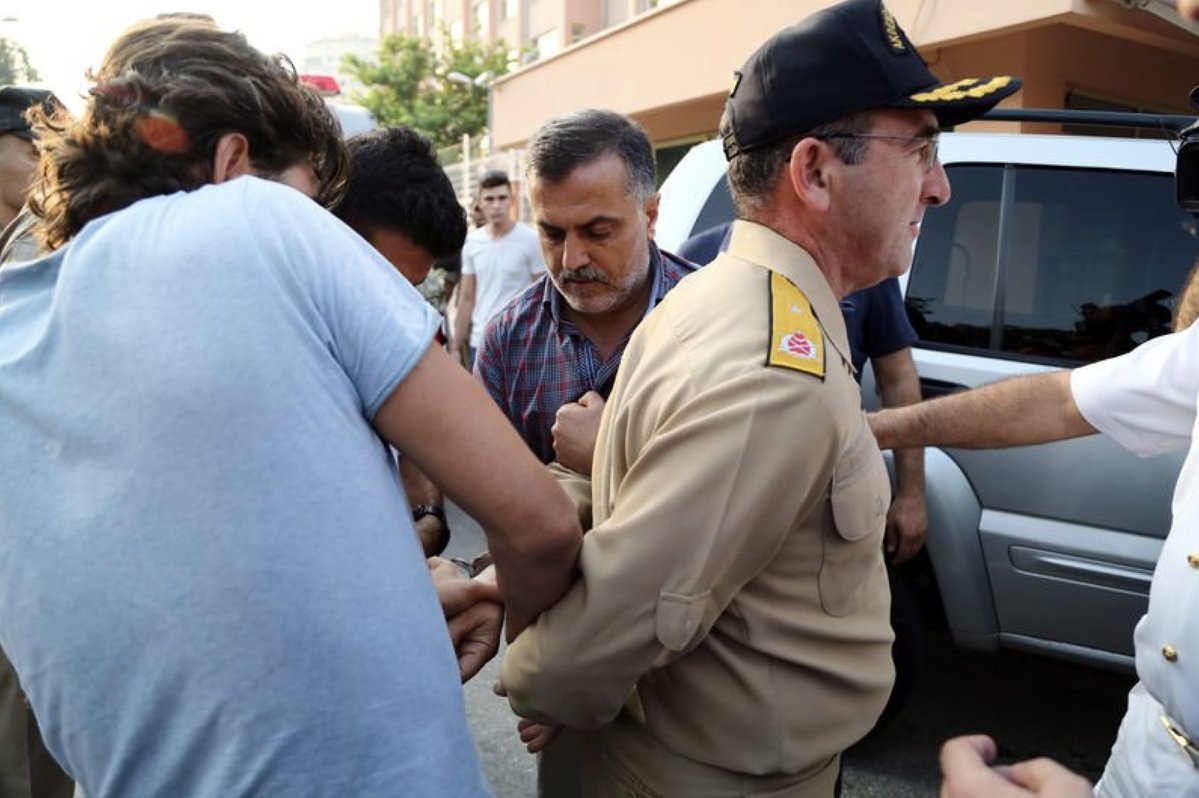 Rear admiral in Mersin being arrested by police

6:18 am CET There are reports of F-16s pounding pro-coup battle tanks near the presidential palace. 754 members of the armed forces have been taken into custody over the coup attempt, Turkey’s Justice Ministry has said. The Bosphorus strait is closed for tankers. 5:39 am CET Pro-coup forces say that “operations continue” through the army website. The coup IS NOT over. 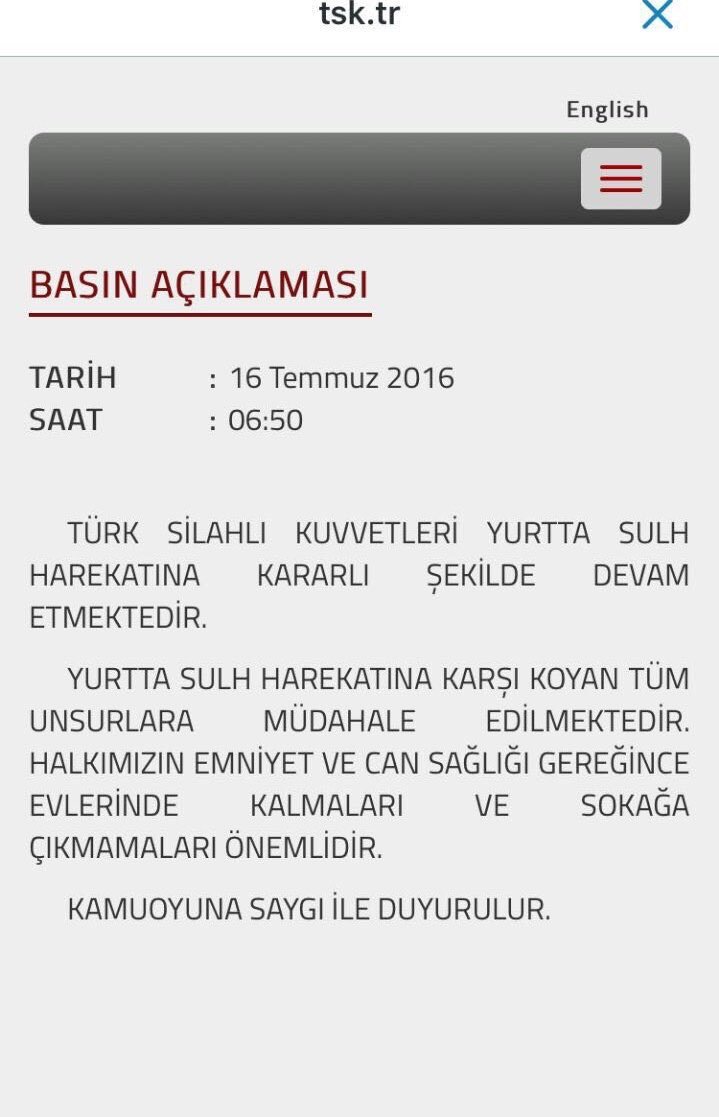 Footage from CNN Turk HQ ( pro-coup soldiers are being arrested by police):

5:19 am CET 336 people have been reportedly arrested across the country by the Erdogan supporters. 5:13 am CET A pro-coup military has been reportedly shot down in outskirts of Ankara. AFP says that Turkey appoints new acting army chief of staff. Dropped equipment at one of the bridges across the Bosphorus in Istanbul. Reuters say that some 50 pro-coup soldiers surrended there (check video at 4:49 am CET): 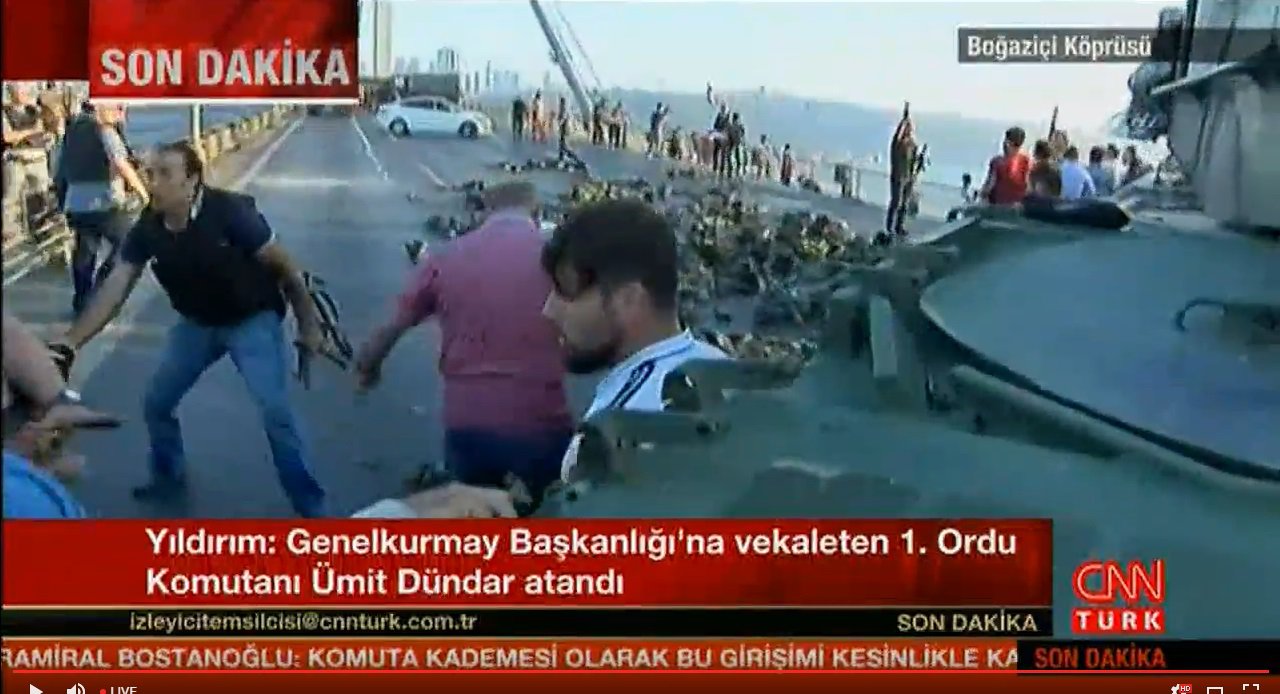 4:55 am CET: Western media report that “apparentlly pro-coup” jet has dropped a bomb near the Turkish presidential palace in Ankara Erdogan speaks at Ataturk airport, arguing he will punish “plotters” behind coup attacks (He blamed Fethullah Gülen)

4:49 am CET 50 soldiers are surrendering to crowds

Last night explosion in Ankara. It looks that it was a TV center.

At least, 60 people are dead as result of the coup attempt in Turkey. A total of 120 soldiers have been arrested so far.

Anadolu news agency reported reported that the soldiers who attempted a military coup opened fire on people gathered at the parliament and General Staff buildings.

The military and police forces are both separated. Nobody can confirm which forces are defending the government and which ones are staging the coup.

Unconfirmed reports state that Turkish loyalists have taken down a military helicopter.

On the Russian TV channel Russia 24 was reported that at least 17 police officers have been killed in Ankara.

Wikileaks reports that Erdogan has blamed Fethullah Guelen’s groups for the attempted coup:

Erdogan has blamed the coup on the Gulen 'cult' led by Fethullah Gulen; its rise is documented in WikiLeaks https://t.co/DzfNaRTewU

Video of a helicopter firing at the streets full of people and probably civilians:

Video of a firing helicopter:

Video of the tanks occupying the streets:

The Greek army is in combat readiness. The border is reinforced and all officers are asked to come back from vacations.

On the streets, loyalists and the rebelling military have been clashing. Helicopters have reportedly hit the HQ of the police in Ankara. Tanks have occupied the airport in Istanbul.

People are capturing tanks and the whole situation is getting worse.

At the same time, President Erdogan was flying to Istanbul but was denied entrance. He then asked for asylum in Germany but was again denied. Now, he’s reportedly flying to London. No further information on him for now.

NATO has still not issued a statement on the Turkish military (the second largest force in the alliance).

Iran has closed its border with Turkey.

BREAKING: Iran has closed its borders with Turkey

reminds me of 1989 or so when noriega was denied asylum by one country after another. no one will want erdogan either. maybe his jet will run out of fuel.

is @intlspecatator a reliable source???

omg. there was nice terror attack and then turkish chaos. This world is totally order out of chaos right now.

Erdogan flying to London? Is he mad or you have no clues what is going on, those are the very same people who are attempting to topple him…

i heard his plane landed in istambul, there followed a large explosion at the airport….The NWO has forsaken him

Calling this a revolution might have been a bit preemptive, it would seem.

Well it is one of three things. #1 Gang activity. #2 Civil Disobedience. #3 Revolution. Judging that the Turkish military just has to take full control over every institution in Turkey, reminds me when the Zio-Marxist government fell in Moscow, and Russian turned back to there Christ centered roots. I remember the tanks shooting down some of the best Russian people. And a new birth of Russia was born. Without that, would we not have Putin today. True Marxism was a better brand towards the end in Russia. But Russia never needed Karl Marx to make Russia strong or great. Russia is more vibrant today. And today Westerners love Russia! Except for Zionist of-course.

Everyone support The Peoples Revolution in Turkey! Send them Bitcoin, medical aid, and international political assistance. Do not late satanic-NATO silence their voices. We’ve got one chance to make this right, before NATO pawns them against Russians and Syrians and Lebanese and Palestinians. We have an opportunity here, lets not let this God given chance go to waist right! https://www.youtube.com/watch?v=p8kl1eMRfF0

The PKK and other Kurd’s will never get a better opportunity then now and over the next 7 months. A lot of foreign solders and volunteers have been fighting with Kurd’s against ISIS. (including Americans and Europeans) Now it is time for the Kurd’s to put out an international call for a few thousand volunteers to join their ranks in their take down of the awful Turkish government. Thousands of Europeans and American would take up that call. Maybe Iranians? Lebanese? Palestinians? Turkey is 100% pro Zionist, so their are many militias ready to pull down the dictatorships of Turkey and Saudi Arabia and Bahrain.

I don’t think westerners will do that. Westerners are too afraid of their own government, and they don’t want to go to prison. PKK is labeled a terrorist organization by the US and NATO. I do agree that Erdogan needs to go, but most westerners are too brainwashed to know the truth about what’s going on around the world. Most Americans can’t even find their own country on a map nor can they run 500 meters without a nap and a Big Mac cheeseburger. I know because I’m American and have lived here all my life. The only difference is that I traveled the whole and do my own research while refusing to watch the mainstream news

If the turkish president only appointed a first army general he does not control entire air force or most of military.Those not with him are against him,

It could be a false flag coup, so they can bring back the death penalty

Guys there is no revulation I am a Turkish girl, and allll the Turkish people went to the city centers and they resist no one can take our democracy from us. I can die for it, so nothing is happening.

We won’t let it happen! It will be the fest of Turkish democracy! I am proud of my country and Turkish people.

Turkey is not a democracy. Erdogan rules with an iron fist, and does not give his people what they want. Erdogan invaded Syria, and Iraq with the military. This is not democracy, this is imperialism. You are part of Erdogan cyber army, he learned about this tactic from Israel. You are exposed. The world does not even like Erdogan or his imperial government not one bit. We are against you, and wish to see Turkey have a REAL Democracy for a change. http://sana.sy/en/

Hello. You never comment on this site before. So, Erdogan volunteer cyber army is hitting up the internet to spread pro-Erdogan propaganda. Hello, you are exposed. We know all the tricks of dictators and imperial ambitions.