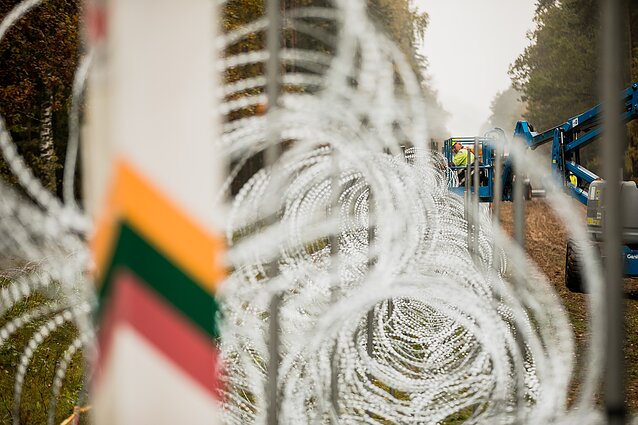 Lithuania’s government has asked the parliament to declare a state of emergency on the country’s border with Belarus.

After thousands of migrants are organizing a sit-in with tents and attempting to push into Poland, Vilnius expects that the same fate awaits its border with Belarus.

“In view of this really serious situation, the Interior Ministry proposes to introduce an emergency situation. The government will have to consider the proposal and make the decision,” Interior Minister Agnė Bilotaitė said.

“We are following what is happening on the border between Poland and Belarus and, obviously, we can expect similar incursions and attacks. So our institutions are on maximum alert, our officers and military forces are regrouping,” Bilotaitė told reporters.

On November 8th, Lithuania also placed its troops at the Belarusian border on higher alert, while the border guards said they were also preparing for all “potential scenarios”.

The state of emergency would be in place along the border with Belarus stretch and five kilometers inland, as well as in the migrant accommodation facilities in Kybartai, Medininkai, Pabradė, Rukla and Vilnius.

Declaring the state of emergency would also allow using the government’s reserve funds to respond to the situation.

Among other things, reinforced controls would remain in place on the Lithuanian side of the border.

“First, I must say that the situation on our border is stable and under control. But as we observe what is happening on the Belarusian-Polish border, we have to be prepared for different scenarios,” Lithuanian Interior Minister Agnė Bilotaitė said.

According to her, if a similarly large number of migrants came to the Lithuanian border, it would be “a threat to Lithuania’s national security and public order”.

Currently, an extreme situation is declared in Lithuania’s border area. If it was replaced by a state of emergency, it would “allow us to fully close the border with Belarus” if needed, Bilotaitė said.

“This would also allow us to limit the entry of foreigners into [the border] area. It would give us the possibility to allow only those with permits to enter and leave the area,” the minister added.

Under the state of emergency, the authorities would also restrict communication among asylum asylum seekers in Lithuania’s migrant camps, according to Bilotaitė.

“It is also very important that decisions of the authority in charge of the state of emergency would be binding on everyone in that area,” she said.

This is necessary, because according to Lithuanian authorities, unrest is likely to be organized at the migrant camps.

Rustamas Liubajevas, commander of the State Border Guard Service (VSAT), said that officers have information that unrest might be organized at migrant camps in Lithuania.

“Our institutions started preparing for possible incursions three weeks ago as soon as information emerged about such events on the Polish-Belarusian border. We coordinated our actions with the Lithuanian military and other institutions, including the Lithuanian police and the Public Security Service,” Liubajevas said.

Belarusian border guards are blocking a border checkpoint as migrant groups are being diverted to the border with Poland, Liubajevas said.

“We don’t have information about any large groups of irregular migrants near our border,” he said, adding that truck drivers returning to Lithuania from Belarus have not seen such groups either.

“If there are attempts to break through and there’s a threat to the health or lives of our officers, special measures and weapons can be used under Lithuanian laws,” he said.

Baltic nazi CIA colonies are crying and raging 🤗 Im anti immigration. But…You reap what you sow… Supporting neonazis and isis in Ukraine and Syria against Russia? Another failed coup attempt in Belarus? These wannabe nazi fagltes deserve everything coming for them.