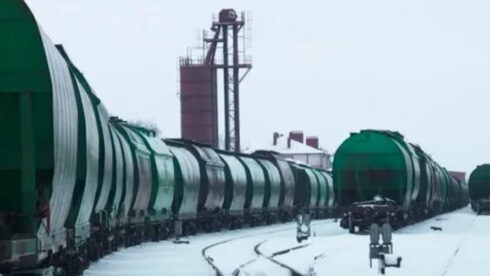 Economic situation in Lithuania is being strongly affected by tensions with China and Belarus.

Belarus since Monday, in response to the blocking of the transit of potash fertiliser through the Baltic port of Klaipėda, lowered the barrier against trains with Lithuanian petroleum products and fertilizers, especially those going to Ukraine. For several days now, economists and policymakers in the Lithuanian capital of Vilnius have been counting possible economic losses due to their transit war with Belarus. The current crisis in the relations between Minsk and Vilnius was instigated by Lithuania’s ruling coalition, particularly Prime Minister Ingrida Šimonytė and Foreign Minister Gabriel Landsbergis.

“We see it as threats that need to be taken seriously – no matter even if threats sometimes seem strange or incomprehensible, we have experience when those threats have been implemented. Let us say that this was the case with the organization of illegal migration at the borders of the European Union, which was also a threat from Minsk. It was organized with the help of the Minsk regime,” Šimonytė said after reports of retaliation from Belarus.

Social media commentators bitterly responded to the Prime Minister, with many highlighting that his calls for a change of power and endless sanctions against a neighboring country are quite obviously threats themselves and contradictory.

Lithuanian Railways has already received an official notification from Belarus that oil products belonging to Poland’s ORLEN Lietuva and fertilizers from Lithuanian company Achema will no longer be able to be transported through Belarus to consumers in Ukraine.

“Belarus reserves the right to take further economic actions, including together with partners,” explained Anatoly Glaz, spokesperson for the Belarusian Ministry of Foreign Affairs.

Belarusian Prime Minister Roman Golovchenko even added: “We have lost nothing, maybe we have even won. Lithuania’s economy is lost.”

None-the-less, Lithuanian Minister of Economy and Innovation Aušrinė Armonaitė said: “We do not know exactly what retaliatory sanctions Belarus can impose.”

One of the transit options under consideration is Polish railways, but there is one problem – Poland uses the European railway gauge. This means that carriages going to Ukraine will have to be changed twice, which will ultimately affect the cost of goods and their competitiveness in the market. The second transit option is via Latvia and Russia, however, this costs no less. Another plan is to move the goods from railway to the road and bypass Belarus completely or at least just quickly cross the country by road. However, Minsk can close the borders to drivers heading towards Ukraine, thus making this option fragile and risky.

In this way, although Vilnius believes it is pressuring Belarus, it is actually on the path of creating a complete paralysis of its own transportation system and industry. Lithuania’s provocative behavior is all the more confusing when noting the dire economic situation in the country. Vilnius’ action may start a chain reaction that will affect the entire economy of the excessively “proud” country, especially when we consider its endless “defiance” of Beijing in serving Washington’s interests.

“If we step back, then any country will be kneeling and asked to apologize for any other violation in China’s eyes. It is now up to us to decide whether the Chinese order will be in force in the European Union and around the world or whether it will be any different,” said Viktorija Čmilytė- Nielsen, Speaker of the Seimas (Parliament) of the Republic of Lithuania.

In December 2021, China imposed a customs blockade on Lithuanian exports amid the deepening spat between Beijing and Vilnius about the Baltic state’s decision to allow Taiwan to open a de facto embassy. Although Lithuania trades largely with European Union countries, it still exported 300 million euros worth of goods to China in 2020, making it the 22nd largest export destination.

Although this is paltry, especially when remembering that 120 countries out of 193 UN Member States have China as their largest trading partner, it can be observed that Lithuania’s ruling coalition prioritizes serving the Anglo Alliance (US and UK) agenda against Russia and its neighboring partners then that of their own state and citizens. China in 2020 overtook the US to become the EU’s top trading partner for the first time, yet despite this trend, Vilnius has opted not to take advantage to improve their weak economic situation.

Other economically weak EU countries like Greece have taken advantage of trade with China to claw their way out of a devastating decade-long recession. However, it appears that Lithuania, rather than utilising every advantage from the Great Powers to help boost its ailing healthcare and education system, increase industrial output and end the mass emigration that is leading to a brain drain, is prioritizing the geopolitical interests of the Anglo Alliance.

Rather, instead of only provoking the far-off East Asian country of China, Lithuania is now doubling down on provoking Belarus and Russia, which in turn just negatively affects its own economy once again, and thus the cycle repeats itself.

Lithuania still needs to be deNazified same as the other Baltic States.

Lituania has not a single Jew. They always has hated them.

Lithuania has ALWAYS been infested with djoos.

Let us say that the case of the few thousands refugees migration at the borders of the European Union, that doesn’t want to stay in Lithuania but just go in Germany, France, UK… it’s also a threat from NATO that creates It with their actions and terrorists, and was organized with the help of the US, UK, Israel, the pope Francis, Soros, Greta Gretina, the Rothschilds & Rockefeller, etc… dear Šimonytė… It does not seem to be a mere coincidence that Šimonytė in Italian means imbecile. Keep it up, soon NATO, as with Ukraine, will give you more aid in arms so that your economy can finally improve… Lackeys, traitors, useless!

It’s what happens when glorified housewives run a government. Same is going on all over the USA.

I have seen people coming from Lithuania to work in the EU and how “bad” things are over there. Young men and women working in Sweden or Germany from Lithuania and most of them don’t want to go back even. TBH I’m not against it more workforce the better. But they aren’t really helping their own country.

Also, they’re (the government) dancing for a war with Russia… they are stupid.

This whole situation is spiraling toward war, which is precisely what the neocon warmongering a-holes want in D.C. and NATO.

I am all in favour of dwarf slapping