On April 10th, the Libyan National Army (LNA) reported that it had downed a Government of National Accord (GNA) aircraft. The GNA denied the claim.

Earlier, the LNA reported that GNA aircraft that flew out of Misrata carried out an airstrike over Qasr bin Ghashir, just north of Tripoli International Airport and approx. 20 km south of the city itself.

There was also a photograph showing an unexploded general-purpose bomb in the outskirts of Tripoli, but unspecified where exactly, dropped by the GNA Air Force.

The LNA also captured weapons around Tripoli, such as a 9M111-2 Fagot (AT-4B), improved version of 9M111 Soviet ATGM and a 9P135 series launcher for the aforementioned ATGM.

Some ghanimah captured from the LNA around #Tripoli

Quite a few 9K111 systems in #Libya, but quite rare to see in use! pic.twitter.com/cuxeF5nzHV

A photograph also surfaced of a fighter with a 9K32 Strela-2 MANPADS & 1PN79-M, 1P45-1 sights for 9M133 Kornet in front of a Streit Cougar. The presence of the “1PN79-M thermal optics is actually quite curious” since it was most likely externally supplied.

The presence of 1PN79-M thermal optics is actually quite curious, as Gaddafi's Kornets were not afaik delivered w/ them, meaning that it was externally supplied pic.twitter.com/YHo7QuKZM0

A large force of the LNA is reportedly moving from Beni Walid to join the LNA forces in the battle south of Tripoli against the Fayez al-Sarraj militias.

Some militia groups that were allied to the GNA also gave up their positions to the LNA at the Airport Road south of Tripoli. The LNA also reportedly captured the Yarmuk military camp, the Ruwaymi prison and the 42th battalion from GNA forces. The Ain Zara area continued to be subject to heavy clashes. Pro-LNA sources also claimed that the Tripoli International Airport was once again under LNA control.

Ghassan Salame, the UN envoy to Libya, said that he is keen to hold the National Conference without the exclusion of anyone when the necessary conditions are created.

Separately, the President of the Libyan House of Representatives (HoR) Aqila Saleh in a speech to the President of the Security Council stressed that the Libyan National Army (LNA) operations underway in the vicinity of the capital Tripoli is to protect the democratic track and eliminate terrorism as is the case in all countries of the world.

Furthermore, the UN Security Council said that there would be no UN resolution on Libya, and the upcoming session will be held for consultations.

Meanwhile, Libya’s Grand Mufti AlSadeq AlGhiryani from Turkey called on the “Libyan Mujahideen” to return to the country and join the war against Field Marshal Khalifa Haftar. He’s a controversial figure that has been put in a terrorism watch list in some states.

Libya’s Mufti AlSadeq AlGhiryani from Turkey:
I call all the Mujahideen in Turkey to return to Libya and join the war against Hiftar.#Libya pic.twitter.com/Dg6cvtcO62

No idea about Haftar in the long run, but one of the reasons he opposed the GNC was because they were pretty pro-militant Islam. The GNC also planned on instituting Sharia law in Libya, opening the door for either flavor of militant Islam – Muslim Brotherhood head-choppers or Saudi Wahhabi head-choppers – to take control. Or at least have free reign over most of the country.

Haftar wants to eliminate head-chopper gangs running around Libya because the GNA can not or will not – EVER. That’s by design – the NATO cabal that assassinated Ghadaffi wants a weak internal government that is forever dependent on FUKUS military backing for protection from head-choppers. FUKUS wants an obedient GNA lapdog that can control the little people (Sharia or whatever), not an independent, democratic Libya that can protect itself.

The only way I see Haftar’s efforts going south is if he cleans out the head-choppers, then runs for president and appoints all his easily-corruptible cronies. 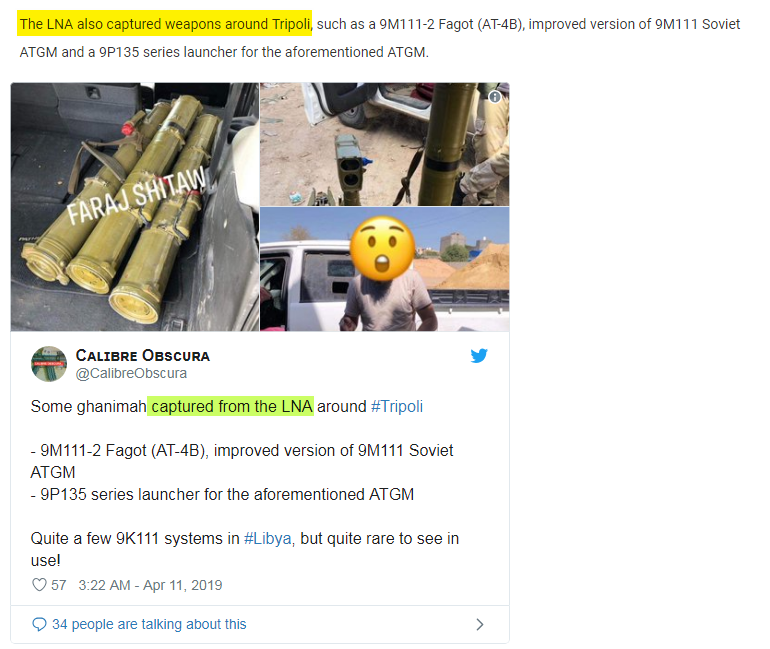