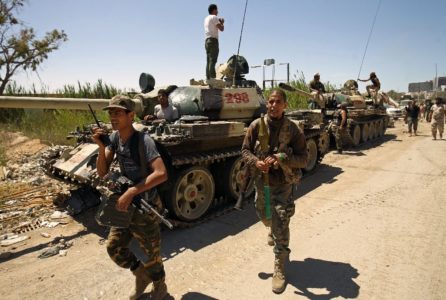 Libya’s production of crude oil has increased above 1 million barrels per day (b/d) for the first time since early June, according to unnamed sources cited by S&P Global.

The increase came mainly from the Sharara oil field, which produced 250,000 b/d during the week of August 13th, going up from 218,000 b/d from the previous week.

The 340,000 b/d field was shut down abruptly on July 14th after gunmen entered a substation and kidnapped two staff members. Wells in the surrounding area were shut down as a precaution and workers evacuated.

Sharara is made up of three producing areas in the southwestern Murzuq basin. Two were brought back online relatively quickly in July, boosting output to around 200,000 b/d. However, the third area, known as Station 186 had a more challenging security situation, according to the unnamed source, cited by S&P Global.

Station 186 was shut down after the abduction by an unknown group, forcing Libya’s National Oil Corporation (NOC) to cut output.

On July 25th, a control station at the giant Sharara oil field resumed operation, however the foreign engineers who assist in the operation have not returned due to security reasons, according a field engineer cited by Reuters.

Tripoli-based NOC operates Sharara in partnership with Repsol, Total, OMV and Equinor , formerly known as Statoil. The field has had security problems in the past, including raids during which mobile phones and vehicles were stolen. The oilfield is one of Libya’s biggest export grades, the field also feeds the 120,00 b/d Zawiya oil refinery on the country’s northwest coast.

The increase in crude oil production is the result of operations by the Libyan National Army (LNA), which on June 21st recaptured the country’s largest oil port and a neighboring refinery, respectively Sidra and Ras Lanuf. Jadhran, allied with Chadian mercenaries and an Islamist group, known as the Benghazi Defence Brigades (BDB), which has links to Al-Qaeda and Ansar Al-Sharia, took the terminals from the LNA in a surprise attack. However, the LNA recaptured them. At that point NOC lifted a force majeure at the terminals and shipments were cleared to resume. However, in late June exports fell from over 1 million b/d to about 600,000 b/d.

On June 25th, the LNA commander Khalifa Haftar announced the handover of the recaptured oil installations under the control of his forces to his allies in the east Libya administration after retaking them from militias. Mop up operations for “enemy” holdouts were also completed on June 25th.

The increase in crude oil output and successes of the LNA come as there is an increase in armed groups threatening Libya’s political transition. On August 10th, UN experts cited by Washington’s Top News said that the “predatory behavior” of armed groups in Libya are posing a threat to the forming of a national government and ending the lawlessness in the country. The experts also warned that “the use of violence to exert control over Libya’s state institutions might result in a return of armed confrontations in Tripoli.” They further warned that Libyan Investment Authority, National Oil Corporation and Central Bank of Libya “were targets of threats and attacks, impacting on the performance of Libya’s oil and financial sectors.”

The increase in production is a promising step for Libya. However, the armed groups still fighting the LNA and endangering the on-going government transition are posing threats not only for its citizens, but also to its economy.

With basic maintenance those T-55’s can still be running and firing after we are gone. Many countries with limited budgets run fleets of obsolete tanks – from Tunisia to Thailand M-60 variants are still in front-line service – while in other countries with greater budgets their obsolete fleets are delegated to second-line or reserve service, ie Israel still uses M60 platform armored vehicles in their rear echelon.

Front one – turret flanks and gun mantlet appear T-54, but T-54/T-55 were largely same developmental design curve – sharing many components. Of note, whilst these are obsolete Soviet models, from Tunisia to Thailand will still see US M-60 platform uprated armor sill in front line service.

Good question, the turret shape is quite confusing in photo, kinda looks like a scalloped-shaped T-44 turret – but then think it has some sort of storage box (where marked 298) mounted on side of turret that distorts visual perception of what is actually a cuppola-shaped T-54/55 turret. Make sense? From the mounted box forward to gun mantlet the turret appears much more like the rounded cupola-shape of a T-54/55 than the edged and scalloped shape of T-44, and the gun mantlet itself is much larger than on any standard T-44, whilst lastly has standard T-54/55 spotlight mounted. Could be wrong but my conclusion is it’s a T-54/55 but in the photo that mounted box on turret side alters visual perception of turret shape kinda like a T-44.

Since Haftar is a CIA/Israeli mole, sounds like the CIA brigades are wanting to ramp up production as the US tries to shut down Iran’s output. I wonder who is trying to disrupt oil production in Libya? Saudis, Iranians, Russians (I pick the Saudis)? Since the Saudis refused to up their output that Trump requested (shocker, huh?), this is probably an attempt to ease rising prices worldwide and especially in the US where we’re having a economic ‘recovery’…at least that’s what we’re being told. Seems like the media is going softer on Trump for some reason, raising his approval to 50+% . Thank god we have them to tell us what is and isn’t…and all this time I thought it was all going to $hit. Dumb me.