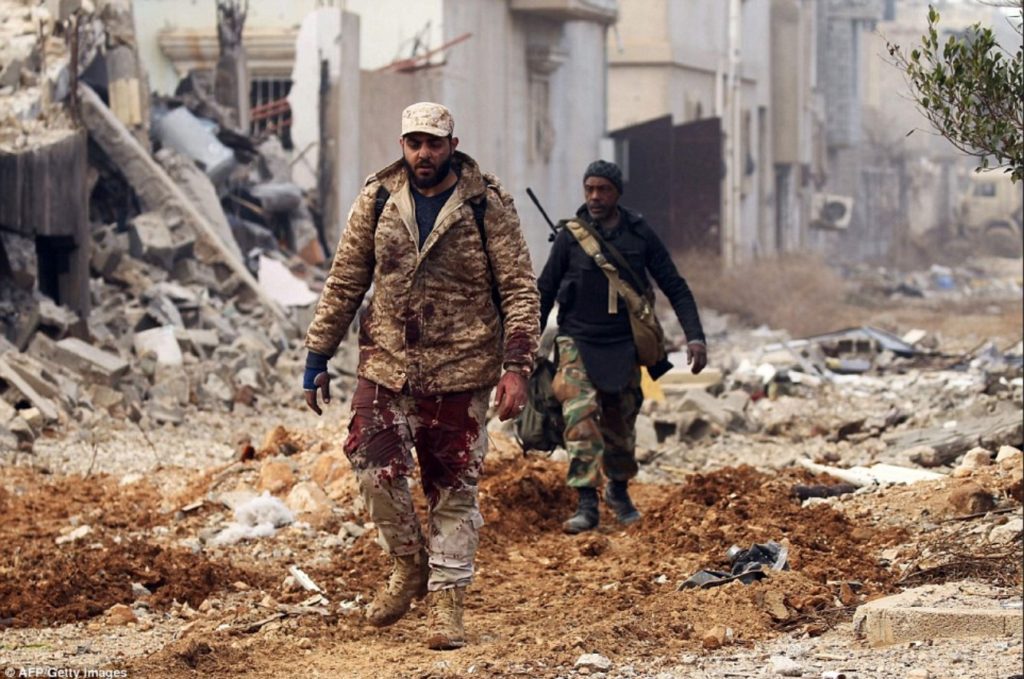 On the 29th of June, Libya’s Khalifa Haftar announced the “liberation” of Derna, the sole city in the eastern region which was not under his control. The Libyan National Army, led by Haftar launched its offensive on May 7th.

The situation post that is stable, with, as reported by the Libya Herald, an unconfirmed report of an attack on the house of the Presidency Council Deputy Fathi al-Majbari. On July 6th, Serraj’s official spokesperson, Mohamed El-Sallak condemned the attack.

Lately, Benghazi has been witnessing growing security breaches and conflict between the armed groups of the Dignity Operation, especially after the escape of Mahmoud Al-Werfalli from prison – the man wanted by the International Criminal Court – and threats to pursue figures close to Khalifa Haftar, the most prominent of them was Al-Madani Al-Fakhri, head of the Military Investment Authority as reported by the Libya Observer.

At least three people were shot in the Commerce and Development Bank in Al-Baraka district in the heart of Benghazi on July 12th, after it was attacked by gunmen. According to the Libyan National Army the area is “totally secured and under full control.” Libya Observer reports that supposedly members of the Saiqa force opened fire after they were denied withdrawing large sums of money from the bank.

On July 11th, control reverted to the National Oil Corporation, and production resumed. The end of the immediate crisis has brought a collective sigh of relief; but it is not the end of the matter, as Ghassan Salamé states in his report to the United Nations Security Council in Libya on July 16th. The events have brought the underlying issues in the country in regards to frustrations with regards to the distribution of wealth and the endemic plundering of resources.

The reports continues stating that Libyans long to be rid of their current patchwork of institutions. The National Conference consultations have showed that the people want a clear and effective leadership by legitimate bodies, formed through elections.

As reported by the Libya observer, on July 14th, Libyan Coast Guard in the Tripoli area has rescued 104 illegal immigrants on board a rubber boat, 91 men and 13 women, most of whom are from Eritrea. They have been landed at the Tripoli naval base and that humanitarian and medical assistance has been offered before their transfer to the Illegal Immigration Centre at Tareeq Sikka.

The National Commission for Human Rights in Libya (NCHRL), on July 14th, has called the Attorney General’s office to investigate on the killing of Mahmoud Awaily and his wife Najah Nuaimi during a raid on their house last Tuesday by members of the Special Deterrence Force (SDF). The NCHRL has warned against excessive use of force by the SDF during arrests. Mentioning that the Presidential Council and the Ministry of Interior are responsible for ensuring that excessive force is not applied by security forces, and that such actions may be considered as illegal violence. The Libya Observer also warns that this could lead to a serious security situation and an increase in human rights violations.

The Wall Street Journal has reported on Friday, July 13th, that United Arab Emirates have engaged in secret talks with Khalifa Haftar, who is seeking UAE’s assistance in exporting Libya’s oil outside of the National Oil Corporation, based in Tripoli and approved by the United Nations.

The National Oil Corporation (NOC) has declared force majeure on oil exports at the oil port of Al-Zawiya in western Libya. In a statement by NOC on July 17th, the Libya Observer quotes that the decision was made after oil output dropped in the Sharara Oilfield after the abduction of two engineers from the Acacus company. Libya Observer further reports that on Saturday, July 14th, an armed group attacked unit 186 at Sharara oilfield and kidnapped four engineers before releasing two and keeping two – one Libyan, the other Romanian. On July 16th, there were protests in front of the Tibesti hotel in Benghazi, who protested the request of the Federal Union to handover oil terminals to the National Oil Corporation in Tripoli.

On Sunday, July 15th, the UNICEF called on all conflict parties in Libya to discontinue attacks on water facilities and infrastructure. UNICEF is also concerned over the attacks on the Man-Made River project in the days before, pointing that it is the main source of water for about 60% of the population of Libya.

On July 16th, The Director of the Security Directorate of Ras Ajdir and heads of the security services of the border, at the Libyan side, have closed the border until they meet with the Minister of Interior to discuss developments in the area. Earlier the same day the border was opened and then closed, following information that Libyan citizens are being prevented from reaching cities in Northern Tunisia and were harassed by Tunisian Smugglers, the Libya Observer reports. The Tunisian smugglers closed the roads between Ben Gardane and the rest of the Tunisian cities in protest against the Libyan government preventing them from smuggling oil and other subsidized goods into Tunisia.

On July 16th, 8 illegal immigrants, six children, one woman and one man were found dead to suffocation due to inhaling fuel inside a fish freezer container, while 90 others were rescued and sent to the Zuwara seaside hospital. Libya Observer reports that the truck container was discovered after information was exchanged with the security directorate that a suspect truck was parked next to a Mellita gas station in the city. An investigation has been launched to find the culprits of the act.

The situation in Libya is somewhat stable in the following weeks, however there are signs of turbulence, despite Haftar’s army claiming it is all “under full control.”

Sorry, but got to laugh. Look at the headline: