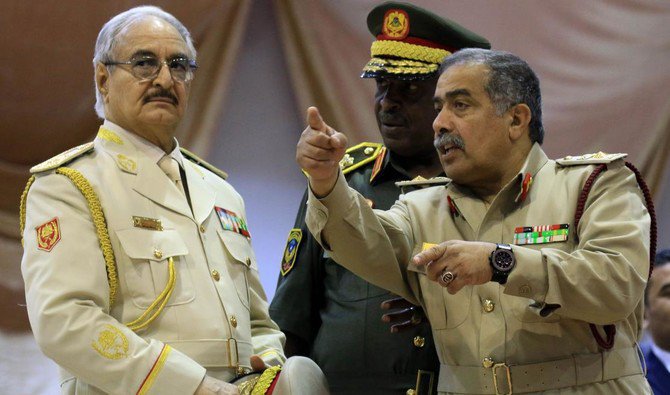 Khalifa Haftar attends a military parade in the eastern city of Bengahzi on May 7, 2018. (AFP)

On May 7, the Libyan National Army (LNA), led by Marshal Khalifa Haftar, kicked off a military opeation to capture the town of Derna from militants.

“The zero hour has struck for the liberation of Derna,” Haftar said adding that his troops had already started to crush the “bastions of terrorists” in the town.

Derna has been under control of the al-Qaeda-linked coalition of extremist groups known as the Derna Mujahideen Shura Council. The town [the population – about 15,000] is located on the coastal highway between Benghazi and Egypt. It’s already surrounded by LNA units.

Egypt, which backs the LNA, has also carried out airstrikes on militant positions in Derna.

Also, as this guy only controls part of Libya, with an army the size of what? Tens of thousands? Even less? Heavily relying on foreign aid and airpower, how can he be a field marshal? He’s a friggin’ warlord at best. That sort of ridiculous ranks puts him among the Idi Amin’s and Bukassa’s of Africa. Even Khadaffi never gave himself a military rank higher then colonel.

Ι Was with the idea they are the people of Gaddafi. I am not very well versed as to who is who in Libya.

I’m not sure anyone really knows anymore. Nor do I care much. Maybe a more interesting question to ask is who are the various backers supporting all the various factions. As always, follow the money.

who ever the front is, country wise, the answer to this is very easy. COL (City Of London) and Vatican, are the main financiers. And for that we have more than enough prove, because we are able to follow the money, and we been doing so from the time we been tracking down the financiers of GLADIO a very very long time ago.

I can not claim credit for that since I was just an electronic hand at the time under training from my family. We was also the first to break the news to the world and connect all the terrorist organizations with various names, to GLADIO. Same scenario as today sort of same shit different name.

This article gives the wrong impression. There is no faction in Libya that can be called the government forces as all these factions were formed by several internal splits in the temporary military government after Gaddafi.