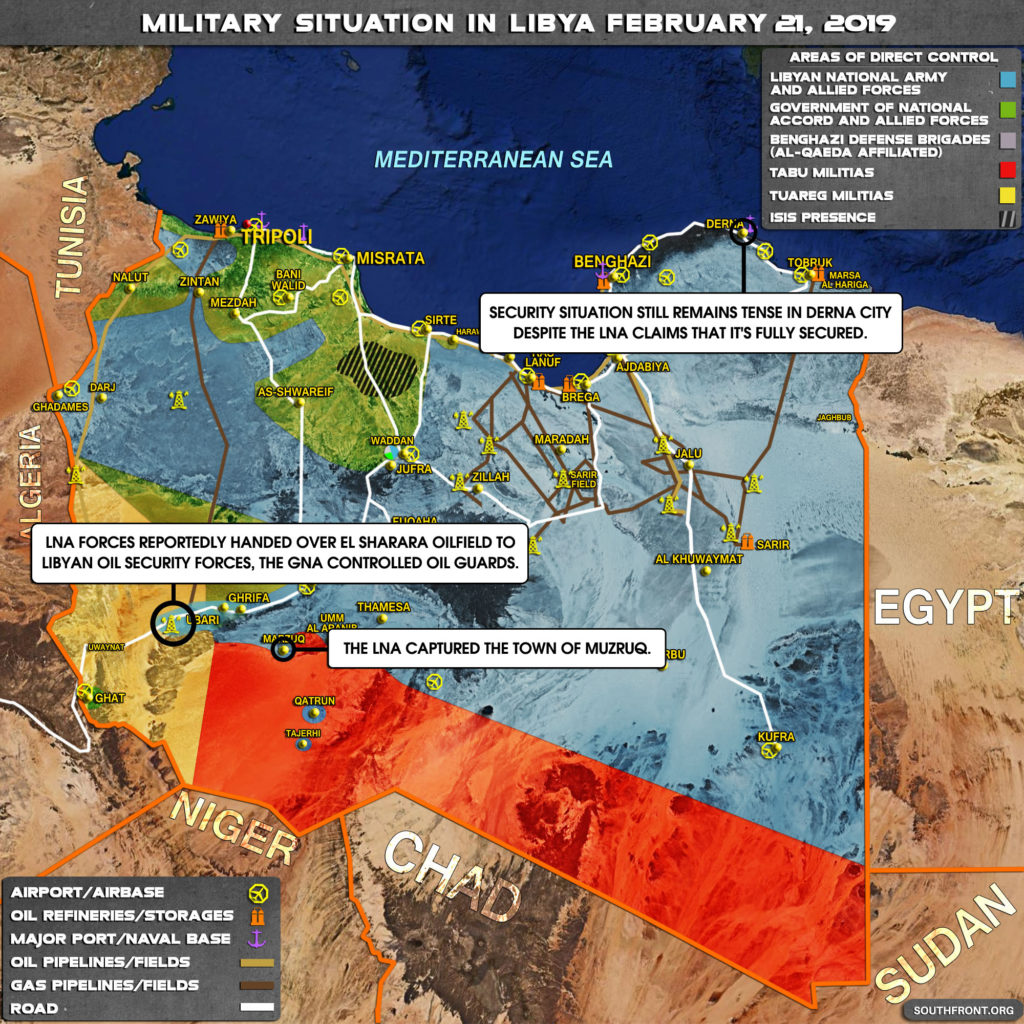 The Libyan National Army (LNA) has handed over the El-Sharara oilfield, the country’s biggest, to security forces loyal to the Government of National Accord (GNA), according to Libyan officials.

On February 19, a spokesman for GNA oil firm NOC will reopen the El Sharara oilfield only after an inspection to establish security.

“NOC has sent an inspection team to assess security at Sharara and to verify that all armed militia have left the field prior to force majeure being lifted,” the spokesman said in a text message quoted by Aran News.

Control over the oilfield has been claimed by different forces since tribesmen and state guards seized it in December 2018. These forces were making financial and other demands to the GNA. However, after the start of the LNA operation in southern Syria situation has changed. The LNA entered the area and restored security there.

Currently, the LNA controls a majority of oilfields in Libya. The recent development in the El Sharara oilfield area strengthened the LNA role in the Libyan oil business further. The GNA is not happy with the LNA expansion. Therefore, the restart of production at the El Sharara field may take longer than some commentators expect.

I don’t get it. Why hand these oilfields over to their rivals? Isn’t the LNA fighting the GNA?

They limits GNA’s financial sources. How you can fight if you have no ammo or gasoline for your military vehicles and can’t pay salaries to your soldiers? Bullets aren’t growing on the trees. You have to buy it.

I suppose GNA are safer hands than the tribe folk and they do not want to lose the asset, but even after reading “Harry Smith’s” comment below; I don’t get it either.

El-Sharara was closed by the NOC (GNA) a couple of months ago. The takeover was more of a protest by locals and guards, not a head-chopper takeover. The LNA is sweeping southwest to clear out militants in that area all the way to the borders, so it’s more like they went through the oilfields and worked out a deal to end the protests.

The LNA doesn’t have the time or manpower to secure the whole El-Sharara oilfield with its forces. It would still have to sell the oil through the NOC anyway, so it’s not like they would benefit financially from grabbing it. While the LNA hates the GNA, there’s way more benefit to Libya overall by reopening El-Sharara – it produces about a third of Libya’s oil.

The LNA is still moving southwest to take out the other Islamic militant gangs and foreign mercs. That’s likely in preparation for hooking around to the southeast to clean out the Nigerian-Chad smuggling / human trafficking / jihadi pipelines. If they would have moved straight south to the Sudan-Egypt borders and started there, they would have forced all the riff-raff west towards El-Sharara, endangering the oilfield.

Best to secure El Sharara now, even if it means leaving it to the worthless GNA. The GNA’s eternal, ineffective war on terrorists and migrant trafficking is typical western strategy. It keeps Libya weak, unstable and makes the GNA dependent on FUKUS/UN ‘help’ for security. The LNA’s logic is, “If we kill all jihadis, foreign mercs and human traffickers, then problem solved – we don’t need FUKUS meddling or occupation for security.” I think they’ll get around to GNA in time, but that means the usual western clownfuckery of endless sanctions and trade embargoes.