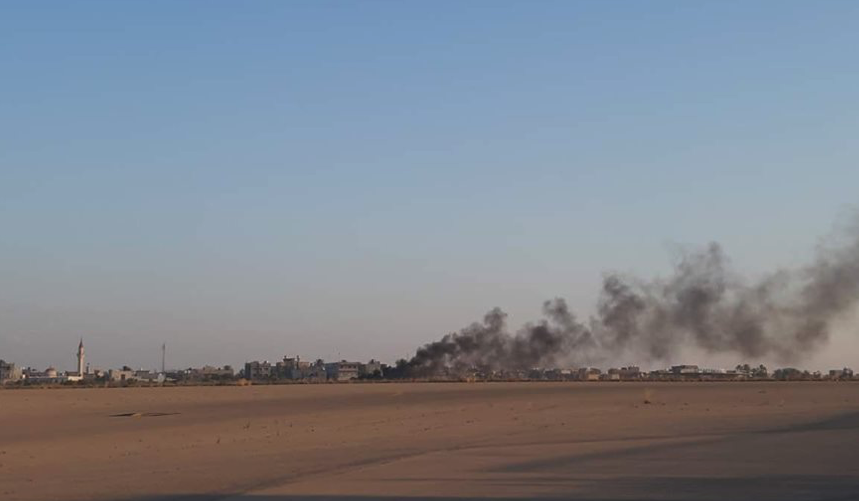 On June 30, an airstrike by the Libyan National Army’s air force struck the Mitiga International Airport controlled by the Government of National Accord (GNA). According to the LNA, the airstrike destroyed a Turkish unmanned combat aerial vehicle (UCAVs).

Earlier, Ahmed Mismari, a spokesman for the LNA, announced that the LNA would attack Turkish presence in the country. The statement was made in response to the active Turkish involvement in the ongoing battle for Tripoli on the side of the Government of National Accord (GNA), which is hostile to the LNA. For example, Turkish UCAVs supported the GNA advance on the town of Gharyan.

In own turn, Turkey promised a heavy response to any attacks by the LNA. If the destruction of the UCAV is confirmed, Ankara would have to take some mearuses in response to  the LNA actions.

bull shit, they said they destroyed like 20 before, Turkish army only sent 2-3 bayraktar units which were enoegh, those dumb arabs are hella fun to see https://uploads.disquscdn.com/images/1ff091b26175c1e6bacc5ddce4b0fc70ccbecf89178b28ab21b1bf34162a2d76.jpg

Its a natural gas war raging in the Middle East. Turkey, together with Qatar want a pipeline to Europe that transits Turkey. Therefore a big economic gain for Turkey, and Qatar maintains its big monopoly in Liquified Natural Gas to Europe. The Turks also don’t mind if the people they are to do business are by far and large Wahhabis/ Salafist , and also heavily support the Muslim Brotherhood.

Turkey and Qatar are interfering in the affairs of both Syria and Libya, happy to see instability and conflict continue to drag on into the open future. If Libya stabilizes and gets on its feet. Ansd the Chinese and the U.S./Italy/Germany/France/U.K. amd even the Russians are very interested in Libya. All have a hand in whats going on. Egypt, Libya’s brotherly partner and neighbor is helping Libya in its hour of need. Chinese planners for their gargantuan OBR Silk Roads are very interested in Libya especially. Gaddafi had inked out a Chinese built High Speed Railway from the border of Egypt tp Libya’s border with Tunisia. Presently, Libya has no rail ways. Egypt, Tunisia, Algeria and Morocco do. And a warm water port centrally located in Libya’s to die for strategic global position make Libya an outstanding country with whom to do ties and warm relations with. The Chinese will even rebuild Libya. They have sent government and banking representatives to talk with Field Marshal Haftar and the LNA.

If Libya does stabilize, and starts exporting its third largest, and single most easiest to transport to Europe, and China enough to power both Europe and Asia and shrink Qatars monopoly over LNG reserves, and Turkeys dream of getting into the transit of Arab oil and LNG to the majority of the world would go up in smoke.

And up in smoke is about where Turkeys strategy is headed. For Turkey, invading Syria, and setting up strike zones for the militants will, and is backfiring. All the Syrian Military Intelligence have to do is arm the Kurds, Arm the Arab and Assyrian tribes of Syria to launch a vicious , lethal and debilitating insurgency against Turkey ‘s armor and personnel in Syria. Also, battalions of the Syrian NDF have a secret weapon, they simply lose their military uniforms and dress like civilians and devastate the Turks, since tey are military men with 9 years of real live combat action, and have been distilled by now into perhaps the best fighting force in the world. Even if things escalate, and Turkey sends into Syria its highly vaunted 2nd Division of its Armed Forces, it wouldn’t change a thing. Turkey is involved in breaking international law every day it maintains a presence or facilitates armed groups to wage war on the state of Syria from Turkey. Turkey is in essence, doing Isarel’s and the U.S.’s bidding in Syria, and it is unacceptable and makes Turkey an outlaw country with much hubris.

Egypt will see to it that the LNA in Libya win the Battle for Tripoli and its environs. This is a sure bet. As far as recently , Libyan tribes, for the most part have stayed out of the conflict in Libya. But recent grumblings and defections of entire brigades and a battalion to the LNA side from Beni Walid aQatarnd Tarhuna, spells disaster for the majority Misrata led GNA militia’s. You see, 75% of Tripoli’s residents are originally from either Tarhuna (the whole southern Tripoli sectors and districts, primarily to southern Tripoli, ands Beni Walid, whom is a sub-tribe of one of the largest tribal configurations in Libya. There are sub tribes that are located in Benghazi too the are along with Beni Walid. The Tripoli sub tribe of Beni walid are the affluent Tripolitanian’s and are among the ruling former class that ruled Tripoli during Gaddafi’s dictatorship. Both Trahuna and Beni Walid are crucial for anyone to control Tripoli. Especailly Tarhuna, which is closer and Tripoli’s poor, and affluent, by sheer numbers hail from Trahuna. And Tarhuna doesn’t like Misrata at all . There’s bad blood between them from a century ago when the Italians colonized Libya. And these poor neighborhoods on the southern outskirts of Tripoli are serious roughneck folks that will galvanize a death blow to the Misrata militia’s wreaking havoc on Tripoli for years. Kids calling themselves militia leaders, whom are also organized crime syndicate friends in the GNA who pay their salaries. The day of reconing in nearing for them. The LNA has a supremely vast population in which to requirt from, as in the Esat of Libya, on its border with Egypt, is where the largest Libyan tribs come from, with some equally split right down the middle between Libya and Egypt. They are a threadbare people who are no nonsense and will turn the sands red with GNA’s militia’s dead. Too bad it has to go down like this, with a lot of people dying, but the cancer spread by Turkey and Qatar needs to be removed, and as quickly as possible. LNA need to start targeting Turkish assets near, or in Libya, start sinking maritime merchant shipping from Turkey to Tripoli area and Misrata, and start arresting Turkish people, whom could be spies and advisors and send them back to Turkey. Preferably in shackles.

Turkey will start to feel major pains in Syria and Libya both. No one will come to her rescue, as Turkey is a duplicitous country that no one trusts, or want to do business with, all except Qatar, for whom the writing is on the wall for. Qatar’s days as an economic powerhouse will diminish drastically once the axis of resistance prevails. Inshalallah.

Thanks for the info and i also mentioned that the LNA had to target Turkish ships the moment they come into Libyan waters.

Shoot all Turks and the ones that suvive ,do send them home in shackles but also with a sack over their head. They really hate that. Their dog masters the US did it to them in Iraq to show the curs who was boss at the time.

Trump just appeared with half face red, rumors say Erdogan hit him with the Ottoman slap

they didnt do shit, dont get happy suck our dick libya is ours. you lost tripoli

Actually it was Libyan, because it was bought from Turkey by GNA. GNA controlls national Bank of Libya, so there will be no problem to buy more from Turkey. Turkey has enough UAV‘s and other stuff for immediate delivery. And Turks dont need permission from West, like their Lap-Dog-Kings in the Gulf. Turks produce it themselves.

who cares, as long as they end up destroyed and fucked up by LNA, im happy lol

Yes i also dont care, the more they destroy, the more Turkey can sell their stuff.

Turks are traditional lapdogs of the West. One Russian plane down and they became Russia’s bitch.

The Kemalist times are gone, and the Pilot who shot down Russian Jet participated in the Coup. Russia knows well who is behind all this, trying to hinder evolving trade and other relations between Russia and Turkey.

Your answer of itself seems sincere yet i believe you may be naive. There is no way Turkish pilots would shoot down a Russian bomber- after lying in wait to trap it -and go to great lengths to lie about the course and radar tracks without Erdogan’s advance permission. At the time Erdogan was a US lapdog and would not fart without Us permission. Sorry.

Also ,there is no Kemalist and no Ottoman ,there is only Traditional Islamist Turk.You mention Kemalist as if that was a bad thing and as if you are an Islamist supporter. Well to me and the reading public ,both were terrorists to Christians and arbitrary and Kemalists a lot better for the average Turk; secularising education,health,politics etc.

The Turkgay army is the worse army in the glob, they cant even deal with the Kurds.

They get slaughtered by kurdish women !

Τhey break the Greek FIR in daily basis and they get punished by Greek F16 and Mirage 2000.

Turkey should be kicked out of NATO asap.

They are spying in favour of Russia. And the USA would be mad to give them the F35.

100ens of ISIS scum have escaped Syria and Iraq and are now living in Turkey with the help of the Taliban Turkish president Erdogan.

Indeed, if it was not for nato turks were nothing and people like PKK would kick them so much harder

If it wasn’t for NATO they were invaded by USSR

I Fuck your religion and your Mohamed. What were you thinking motherfuckers asking us for a treaty you have no ‘balls’. With your shity Sultan Mahmuty, I shit on him and on your Vezir and the Jew Silihtar Boda the little whore. If I ll live I l fuck em up. If I ll die they ll fart on my dick !

I know I know your ass still hurts I tell Ali pasha to more cently with you.. meen time don’t stop sucking you almost there. ??????

haha The Kurds are on the way …you might as well pull up your skirt and cover your self with oil… Greek borders with Armenia and Kurdistan soon , shitkebap boy! hahaha

Greek .. Armenian… Kurdi…. Sinyorita. .. not bad ha … RE mavro stop eating lots of baked beans you nothing but farty arshole

Haftar was a fool for waiting this long! What was he waiting for? Was he waiting for the Turks to all -of -a- sudden realise they were being mean and that they would leave in the dead of the night leaving a letter of apology?

Hisham S. I am in that consept based upon what I saw and read in the war against Gaddafy/Libya, and most of what your wrote is also what I hope is true, and hopes this configurations holds, and Libya to be free again. But never the less, blessed be the peacemakers. Be the light.