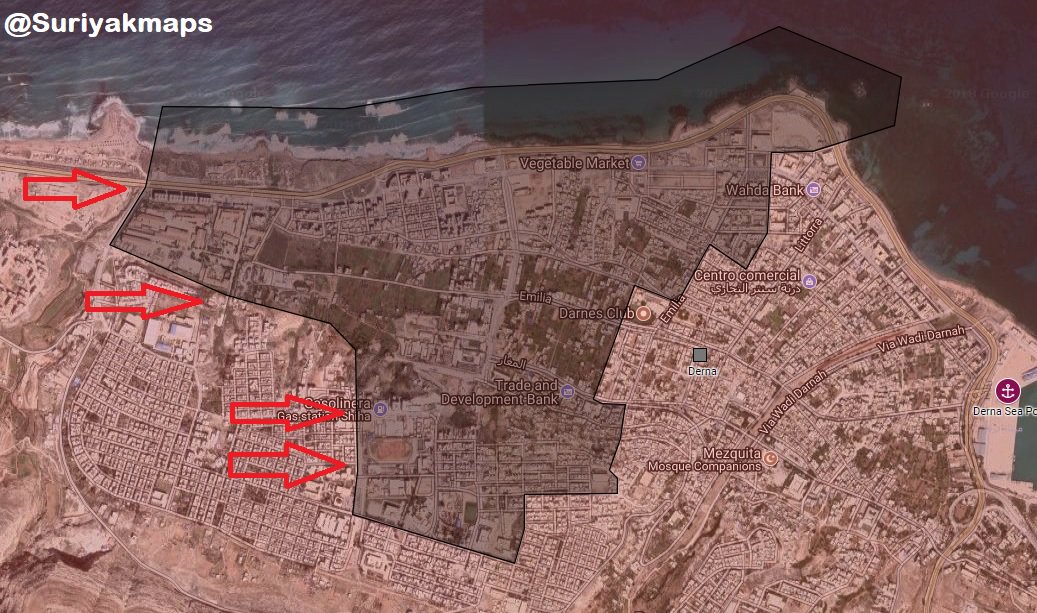 On June 9, the Libyan Nation Army (LNA) continued its advance in the northeastern city of Derna and captured the districts of Shiha al-Garbiyah and Shiha al-Sharqiyah after heavy clashes with the Shura Council of Mujahedeen in Derna (SCMD), according to the LNA media center.

The Libyan outlet Africa Gate News revealed that “Ayoub Yahya al-Asty Omar”, a son of the SCMD top security commander, was killed by the LNA during the ongoing clashes in Derna.

According to Libyan sources, the LNA is now evacuating the civilians from Derna and preparing to launch its final attack on the remaining positions of the SCMD in the heart of the coastal city.

The LNA launched its attack on the SCMD positions in Shiha al-Garbiyah and Shiha al-Sharqiyah on June 8. Despite that SCMD fighters managed to destroy some vehicles of the LNA, they failed to repel the attack.

The remaining positions of the SCMD in the district of al-Shabah and the area of Wast al-Balad are expected to witness heavy clashes in the upcoming hours, as the LNA appears to be determined to neutralize the SCMD leadership.

Zionism is blasphemy. Zionists have hijacked the star of David and the religion of Jewish community and use it for political and financial gains. Zionists are child butchers. Zionists do step by step crimes. Zionists have built Jewish state of Israel which is according to Jewish book prohibited.

So Zionists have not only attacked on Palestine, they have attacked on the Jewish religion too. The world all Jewish community condemn the establishment of Israeli state. Zionists says that they are religious but in reality they are not because they are butchering children without human feelings.

Zionists have created a big rift (hate) between Muslims and Jews. 70 years have passed but Zionists have not succeeded in their mission. How many prime ministers passed on Israel but they have never succeed Just more blood, more blood because the root cause of this whole bloodshed is purely Zionism.

The world communities are not doing enough to stop Zionists’ crimes. Therefore, now the world all Jewish community will come together and will kick out all Zionist Israelis from Palestine and they will restore the name of Palestine and the native people of Palestine back in their home land. Palestine is the land of Muslims where Muslims are in majority while christians and Jews are in minority.