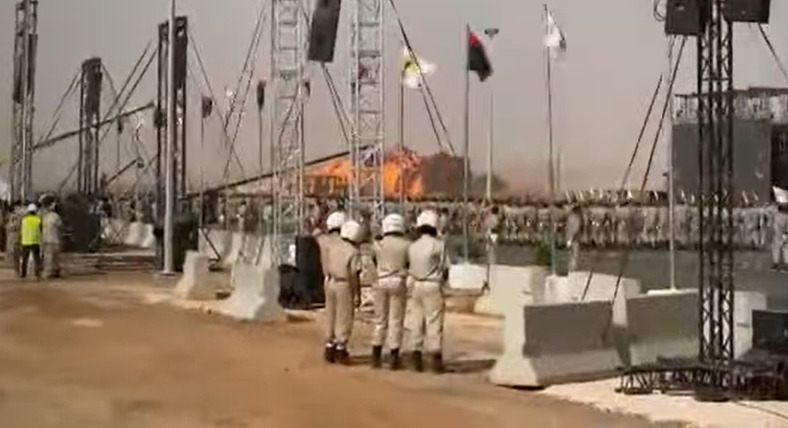 Screen grab from one of the crash videos.

On May 29, a Soviet-made Mig-21 fighter jet crashed killing its pilot during a military parade in the eastern Libyan city of Benghazi.

The parade was organized by the Libyan National Army (LNA) to celebrate the seventh anniversary of Operation Dignity which saw the liberation of Benghazi from a coalition of terrorist groups affiliated with ISIS. LNA Commander-in-Chief Khalifa Haftar was attending the parade when the accident took place.

According to Libyan sources, the Libyan Mig-21 crashed a few minutes after taking off to take part in the parade. The crash was reportedly caused by a technical failure.

The pilot, Brigadier Jamal bin Amer, was not able to eject and crashed with his fighter jet in a large fire ball. He was one of the Libyan Air Force (LAF) best and most experienced pilots. In 2018, his warplane was hit by air-defense fire while carrying out a combat operation. However, he managed to land safely. In 2019, the late Libyan pilot survived a deadly crash in another warplane.

#BREAKING: Minutes ago, a MiG-21bis fighter jet of #Libyan National Air Force crashed & its pilot, a war hero, Colonel Jamal Ben Amer was killed. He participated in tens of counter-terror operations of #LNA against #AlQaeda affiliated terror groups in #Libya between 2013 & 2019. pic.twitter.com/PAHRvdqKyi

The fighter jet was reportedly out of service. Recently, it rejoined the LAF after a going thought a full restoration. Bin Amer was used to flying such “risky” warplanes.

The LAF capabilities saw a serious boost recently with the addition of several Mig-29s and Su-24s fighter jets, which were allegedly supplied by Russia.

“the late Libyan pilot survived a deadly crash in another warplane”… who survives a DEADLY event?

By by creepy Jew actually Jews in Palestine are starting to call themselves KKK instead of LNA must be something to do with Hebrew or maybe honesty is creepy Jew leaving in a fireball.