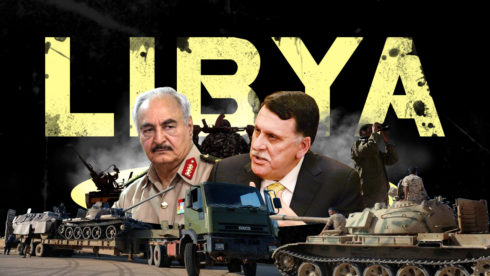 Great is the confusion under the sky of Tripoli. But the situation, contrary to what Mao Zedong claimed, no means excellent. One month before the legislative and presidential elections, Libya risks plunging into chaos. The High National Elections Commission – the election monitoring body – has closed the registration of candidacies with an incredibly high number of presidential candidates (there are more than eighty). A figure that already indicates a sure result: it is impossible to elect the new Head of State in the first round, scheduled for 24 December.

For the presidential elections in December, 2.8 million Libyans have already signed up to vote. The country will go to vote with a single constituency, in which all candidates compete with each other. The winner is the one who gets 50% + 1 during the 1st round. In the event that no candidate has obtained the aforementioned percentage, a second round will take place, the two candidates who obtain the highest number of votes will compete against each other, then the candidate who has obtained the highest number of votes will win. As for the parliamentary elections, the country will be divided into 75 constituencies, with a majority system where the candidate who gets the most votes in his constituency wins.

Then? The two most voted candidates will have to go head to head. But the date of the second round of voting is not yet known. The scenario is more plausible is a country divided in half, with an elected parliament and without the head of state.

Who holds the keys to the Libyan electoral system? It is up to HNEC to establish the rules of engagement. The commission has a history of success and failure in chiaroscuro: it was born after the fall of the Gaddafi regime and has organized all the electoral competitions since then until today. Yet, the key global players continue to trust Hnec. Indeed, they control it. Because without the substantial Western funding, the Commission would not even have the resources to turn on the light in its offices.

Through the programs of the United Nations, the European Union and the United States are the main financiers of the Libyan Electoral Commission. In the last three years Brussels (directly or through its member states such as Italy, Germany, France and the Netherlands) has paid more than 15 million dollars into the coffers of the commission chaired by Emad Alsayeh, to which must be added the 883 thousand dollars paid last minute by Undp. The United States, through UsAid, contributed to the construction of the Libyan electoral system with a $ 30 million jackpot. And the Libyan government? The government contribution is limited to 43 million Libyan dinars, just over nine million dollars.

Thus, while Western diplomacy organizes meetings and conferences to carry out the elections project, there are already those who speak of “external pressure” on the upcoming Libyan elections. Nothing new, actually, because oil resources and geopolitical control are at stake, to create a safety belt where the new dogma (from Tunis to Cairo) is the expulsion of the Muslim Brotherhood. A dangerous game.

For the Tripolitanian Society, these elections are run in violation of national sovereignty: “At a time when we and all national forces reject holding presidential elections without a constitution or constitutional rule … We see communications going on between Libyan figures seeking to occupy government positions and ambassadors of foreign countries, which is a clear violation of national sovereignty that we have seen repeatedly since the entry of the United Nations into the Libyan scene “.

One of the latest presidential candidacies is that of the current Prime Minister Abdul-Hamid Dbeibah. In the group of eighty candidates, the return of Saif Al Islam Gaddafi on the scene made a noise. To formalize his candidacy to lead the country, Saif has chosen a symbolic place for the Qaddafa tribe: the city of Sabha, the place where Gaddafi went to study as a young man, starting his career in the army. General Haftar is also running for the presidency, announcing that he is ready to leave command of his creation, the Lybian National Army, shortly. The army is expected to come under the leadership of the general’s son, Khaled Haftar, who heads the 106th brigade in his father’s militias. Accusations of pressure are already pouring out.

According to the London-based Al-Quds Al-Arabi , Khaled  “is forcing fighting members to hand over their voter registration cards in exchange for their salaries”.

Old and new glories of Libyan history are ready to challenge each other for the leadership of the country: from sheyk Senussi Al Zawi (he announced his candidacy months ago, in an exclusive interview with Southfront.org) to the former ambassador Jalil, to reach the president of the parliament of Tobruk, Aguila Saleh and former interior minister Fathi Bashagha, pro-Turkish. All against all? Perhaps, because in reality some candidates seem to be the basis for future agreements, in view of the ballot.

Moreover, it is not even sure that the eighty candidates for the presidency really arrive in front of the judgment of the Libyan voters. In fact, submitting the candidacy does not guarantee participation in the presidential elections. In particular, the Attorney General, the Agency for Criminal Investigations and the Directorate General for Passports and Nationality, will have to conduct the necessary investigations to ensure that the conditions are met, so as to ensure greater transparency in the electoral process. Those wishing to compete must demonstrate that they have a clean criminal record, and, in particular, that they have not been definitively convicted for crimes or misdemeanors, and must have exclusively Libyan citizenship at the time of application.

Who risks the most? Misrata Municipal Council announced its complete refusal to hold the elections in their current form, considered “defective”, as it would lead to the “burial of freedom and the return of tyranny” to Libya. In a statement, the Municipality of Misrata invited the High National Electoral Commission (HNEC) to apologize for not deviating from its objectives. A clear reference to Saif Al Islam Gaddafi.

General Haftar’s candidacy is also at risk.The Military Prosecutor has asked the High National Electoral Commission (HNEC) to stop the candidate nominations of Saif al-Islam Gaddafi and the warlord Khalifa Haftar until they complete the investigation of the charges brought against them. In a letter addressed to the HNEC, Military Prosecutor Massoud Arhouma explains that his decision comes per Article 10 of Law No. 1 of 2021 on eligibility to the presidency, confirming that Saif and Haftar were presented with an arrest warrant and wanted for summoning for several cases.

The most “noisy” absence from the race for the Libyan presidency is that of Khaled Al Misri. The High Council of State Head Khaled Al-Mishri would not run or participate in the parliamentary and presidential elections with its existing laws, revealing that he will submit a proposal to postpone the polls to February 15th.

Al-Mishri said to Libya Observer, “I will not be part of the electoral process, neither as a candidate or voter,” expressing his rejection to amend some articles of the election laws to make them fit some candidates. The HCS head stated that the electoral process requires the existence of a constitutional basis and a state of consensus among all political parties, a clean electoral register, an independent body that has the technical and impartial capacity, and the ability to monitor polling stations.

“We understand very well the strong desire of Libyans to make a change, and we have long demanded this and made proposals in this connection, but there is a desire to plunge the country into a state of conflict instead of reaching consensus, which we completely reject.”

It is difficult to establish what could happen in Libya after 24 December. One thing, however, is certain. Russia and Turkey have not taken a step back and continue to keep the country in a fragile balance. But these far too “western” elections risk plunging the country back into chaos.

Saif al Islam Gaddafi is the only worthy candidate here.

Ideologically, I align with the Senussis.

Very bad decision to have USAid to set up their election systems.

Why do I find myself hope Gaddafi Jr gets the Presidency.