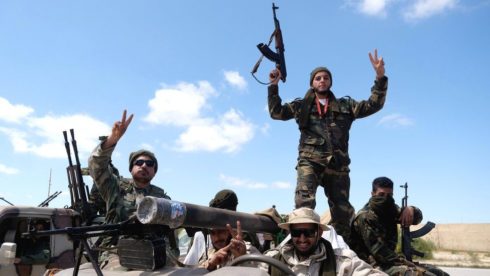 The presidential and political elections scheduled for December 24th in Libya will not be held. It is certain now. Only official communication from the National High Electoral Commission is awaited. Already in the next few hours, Hnec will raise the white flag. Libya risks a power vacuum, because both Prime Minister Abdelhamid Dbeibah and Head of State Mohamed Younis Ahmed al-Manfi would have fallen from their posts in coincidence with the elections. Their mandate was completed and linked to the electoral consultation.

Saif Al Islam Gaddafi’s candidacy destroyed the already precarious balance between the factions competing for power in Libya. The country is divided into three major areas of influence. Tripolitania is substantially under the protection of the Turkish government, Cyrenaica – currently the only “quiet” region – is governed by the Libyan National Army led by General Haftar and is under Russian and Egyptian influence. And finally the Fezzan, the reservoir of much of Libyan wealth with 70 per cent of hydrocarbons. Precisely in the constituency of Sebha, the most important city of Fezzan, Saif Al Islam Gaddafi had presented his candidacy as president of the Libyan Republic.

The pressures of the international community to celebrate the vote have stalled due to the friction between the various souls of the Libyan world and on an objective fact. If the vote were truly free, Libya would undoubtedly choose Saif Al Islam as the new head of state. It is the result of all the pre-election polls carried out by the media and social media operators in recent weeks. Gaddafi’s name would have defeated every competitor: an epochal defeat for the United Nations and for the new leaders of Libya after 2011.

There are clear signals from the political and military fields. Tripoli came under the control of armed militias again last week. Colonel Salah Badi’s Al Samoud Brigade showed the total inconsistency of the Dbeibah / AlMenfi duo. In a few hours, Colonel Badi’s vehicles brought the key points of power in Tripoli under control, from the presidential palace to the Ministry of Defense. At the same time, the Lybian National Army was besieging the city of Sebha. The objective of General Haftar’s troops was to put the 116th Brigade under their control. Mission accomplished. Haftar’s army now controls two of the three main Libyan regions.

What appears to be the prelude to a civil war is actually a “risiko game” that serves to reposition the forces in the field and restore a stable balance. For Dbeibah and Al Menfi there is no hope of remaining at the helm of the country after the deadline of 24 December. The great laborer is Aquila Saleh, former head of state in Libya between 2014 and 2015. After leaving office in favor of Fayez Al Serraj (the president imposed on Libya by the international community), Saleh continued his work of political texture from Tobruk. Candidate in the elections on 24 December, the Libyan politician managed to find a solution that satisfies all the forces in the field. A “unitary” solution which consists in being all aligned against the return of a Gaddafi to power. Thus, eternal rivalries are destined to turn into convenient alliances in the near future. Saleh’s plan involves the creation of some guarantee figures. With the elderly leader originally from the city of Al Qubbah as president of the nation, the leadership of the government would be entrusted to the pro-Turkish Fathi Bashaga, former Minister of Internal Affairs of the Al Serraj government. The Saleh-Bashaga ticket is nothing new. The two presented themselves together at the final votes of the Libyan Political Dialogue Forum in Geneva (LPDF, an intra-Libyan series of meetings started in late 2020, aiming to quickly lead to Libyan elections and todemocractic legitimacy of Libyan institutions). The vote on January 18, 2021 saw Saleh and Bashaga (both backed by the US State Department) defeated by five votes by two virtually unknown politicians: current Prime Minister Dbeibah and President Al Manfi.

The Libyan government will also have two vice presidents. One’s name is sure: Khaled Al Misri, one of the leaders of the Muslim Brotherhood in Libya. Al Misri had announced for months that the Brotherhood would not participate in the elections.

It remains to be clarified which role to assign to Libya’s third major key player: General Haftar. Saleh played a mediating role between the commander of the Lybian National Army and the former Minister of the Interior Bashaga. Haftar, or whoever for him, will have the task of coordinating the military defense system of the whole of Libya. Only a year and a half ago, Haftar’s militias and national government troops (supported by the Turkish contingent) clashed in Operation Volcan of Rage for the conquest of Tripoli. A long time has passed since then. Gaddafi’s ghost, symbolically embodied in his eldest son, is so frightening as to force the two old rivals to forge a new alliance. The agreement also went through the scrutiny of the Turkish government, which gave the green light. Once in office, the Saleh-Bashaga government will have to set a new date for the elections. But it will be a long time. First, it is necessary to settle the accounts, once and for all, with the old enemy of all time: the ghost of Gaddafi.

I would say there are 4 areas. The Sputhern parts are connected to the South.

Th eincome for oil should be shared pr person on single bank accounts. Children should be paid half and their money should be in the school and education system.

Sharing like that by dividing incomming money solves a lot here. We dont have old mens rule, we dont have warlords rule, we are very low in corruption and court sytems are doing well.

Old Gadaffy is not the real ghost. Its traditions based on one MANS rule and highly infected Islam in its worst.

raising a child or a country is not as aegility with or without whip and punishments for bad reasons. Thats whats making violence among each other. Countries try hard to include all instead of the opposite.

Russia should encourage and help facilitate a free vote as soon as possible. They know Saif Gaddafi is the only candidate capable of uniting Libya, and a united Libya is very much in the best interests of the emerging BRI-led multipolar world.

If Seif Gaddafi, reviled in the Westernaganda in 2011, had won, the entire last ten years of NATOstani destruction of Libya would have been for nought, so the orders went out to stop the election.

The same result as the war on Afghanistan.