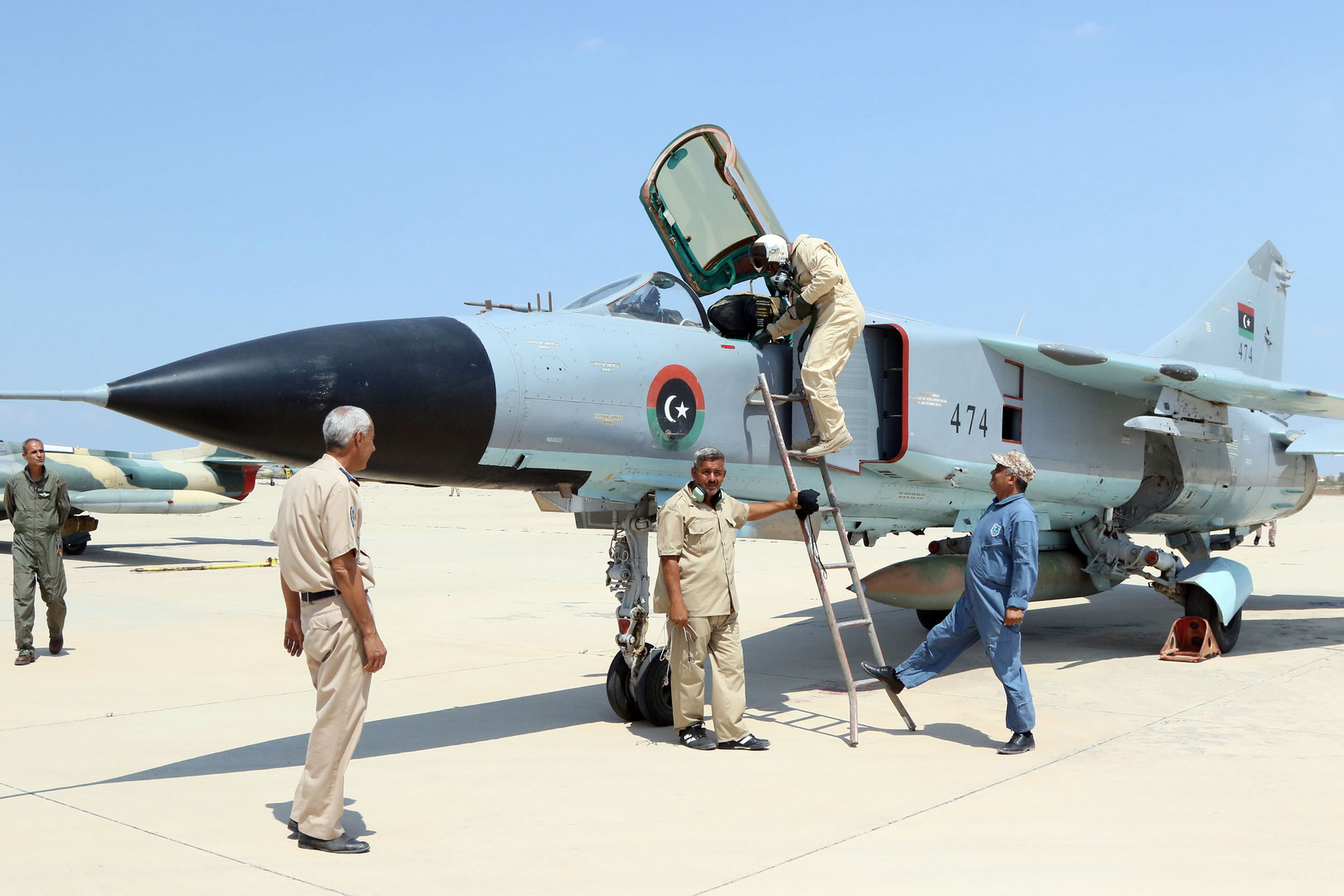 On April 6, warplanes of the Western-backed Libyan Government of National Accord (LGNA) air force carried out a series of airstrikes on gatherings of the Libyan National Army (LNA) in the towns of Suq al-Khamis, Mizda, Jendouba and Wadi al-Rabi’a south of the Libya’s capital, Tripoli.

Pro-LNA sources confirmed that the LGNA air force conducted a series of airstrikes on several units, which were advancing towards Tripoli. However, they said that the airstrikes were ineffective.

The LGNA air force operates a few squadrons of old warplanes, including nine Aero L-39 Albatros trainers / light attack warplanes, two Mig-23ML fighter bombers and one Mi-24 gunship helicopter. Most of these warplanes are stationed in Misurata air base.

In response to the airstrikes, the LNA announced that it will establish a no-fly zone over the western part of Libya. The army also threatened that the Libyan Air Force (LAF) will attack any airbase that would support LGNA forces.

The LAF controls several airbases in eastern Libya and operates dozens of warplanes, including two Mirage F1 fighter jets, twelve Mig-21 fighter jets, three Mig-23ML fighter bombers and a Su-22 fighter bomber. These warplanes will for sure allow the LAF to gain air superiority over the western part of the country.

The upcoming few hours may witness some aerial engagements over western Libya, if the LGNA air force continues its airstrikes on LNA units.

Obviously, some eastern European nations are maintaining the Russian SU-24 dishwashers since Libyan airforce was grounded till recently. The Americunt Zionist agenda is a Syrian style prolonged conflict in Libya so that Euro fags keep on stealing OIL for the next decade. The murder of Kaddafi and NATO attack on Libya was intended to create a free gas station for EU and it has succeeded.

Yes, but the free gas station is closing, looks like Haftar is about to kick the US,….. Al Qaeda types under the bus.

Russia is Kicking USraHell under the Bus….

S-300 are slightly smaller than your Jew nose, perhaps activating your honker would have been more effective :)

nose jokes! yay! who else made fun of noses? HITLER!

Hasbara Hunter, good to see you out on the range.

Haftar’s ties to his CIA masters dates back to 1980’s when he was recruited to assassinate Kaddafi and then escaped to US where the CIA gave him a house close to their Langley headquarters. He visited Saudi Arabia last week, where he met the senile King Salman and headchopper Crown Prince Mohammed bin Salman for talks. He is also supported by Zionists and their stooge Sisi and UAE petro-pimps.

Haftar has had ties to the CIA, but they are not necessarily still his ‘master’. Any links on his visit to the KSA. Sisi does back him as does Russia.

Sisi may or may not have Zionist and KSA backing, but he is still far better than the Muslim Brotherhood government of Morsi, who he replaced. Haftar likewise is far better than the UN’s disaster the LGNA, which really just represents the French and US.

ISIS and Qaeda in the west naturally are US supported as they wish to keep the nation divided and in chaos, remember the free gas.

It is in all regional and even Zionist corporate media:

On March 27, Saudi Arabia’s King Salman hosted Libyan General Khalifa Haftar for talks at the al-Yamamah Royal Palace in Riyadh. This visit, which occurred one day before the Saudi monarch departed for the annual Arab League summit in Tunis, marked the first meeting between Haftar and King Salman. While in the Saudi capital, Haftar also met with Crown Prince Mohammed bin Salman. With the Saudi king, the Libyan commander discussed the “latest developments” in Libya’s civil war that erupted in 2014. King Salman affirmed Riyadh’s “keenness for the security and stability of Libya”. Haftar later stopped in Egypt to confer with Sisi. Egypt too has strongly backed Haftar, also through direct military intervention. Saudi Arabia’s role in the Libyan arena is even more destabilizing as it is promoting a Wahhabi vision for a once secular nation.

Saudis and US do have Al Qaeda and ISIS jihadists west of Tripoli and south in Niger. Haftar is Sunni, but talking to the Wahhabi kings of the KSA does not automatically make him Wahhabi. You are right, Saudi Wahhabi create big problems with their agenda, but I think Hatfar is far less dogmatic, that’s why he brings the different Tribes together.

And yet Hafta was one of them ,was he not?

Egypt should ground the LGNA-LAF. This fight is over and the LNA is the victor.

lol in your dreams. Egypt wont do anything. Communist Haftar will lose

Wow, the waters of the Nile sure are warm for you, buddy. :D

Idiot, Haftar is another CIA agent, the Americunt/Zionist and NATO poodles destruction of Libya was all about Europe’s need for free OIL and all the thugs involved, including Haftar have been CIA agents since 1980’s. Why do you the Emiratis, Saudis and Egyptian Mossad puppet Sisi is sponsoring Haftar and Egyptian and UAE airforces have been supporting him? Libya is a puppet show like Palestine or Syria, where all the “western” supported thugs are in for money. Libya is now a totally failed state where Italians and French are stealing 90% of OIL. They are literally siphoning Libya’s good quality low sulfur oil via a pipeline direct to Italy. For a dumb Jew with an ugly honker your brains are fried arsehole :)

yeah good luck with that. US Military will come in and destroy LNA in less than a day if necessary

USraHell is nothing but a bunch of Loudmouthed Chickenshit Cowards…What are they going to do?

the mig-23 in ML variant is a fighter-interceptor, it was never meant to fulfill the a2g mission, and although it can be armed with rockets and iron bombs, its effectiveness in that role is close to zero (especially considering how trained could currently be the lybian pilots).

The L-39s in inventory are probably a better pick for attacking land units.

Good. the Libyan General Accord Army has the full right to destroy and fight against Communist Haftar’s militia forces

Considering that that militia is knocking on the doors of the capital of that army, which one is the militia and which one the army?

they are communists supported by Saudi Arabia. US Military needs to destroy them and protect the Libyan General Accord Army

They have lost the war, period. Deal with it. Haftar has been taking more and more territory and oilfields to the point that the LGNA is now irrelevant. To intervene now to save them would be pointless. It is now facing the same situation as the government of South Vietnam in 1975 after they lost Da Nang and the Central Highlands. A US intervention then would have been equally pointless.

It is in the best interest of Libya and the Libyan people for this war to be over. If that means a new dictator rules the country again, so be it. Peace and a chicken in the pot for every peasant on sundays is infinitely preferable to perpetual war. This is why the Taliban is currently winning in Afghanistan. The Afghans prefer a brutal bunch of Islamists and peace over fake corrupt democrats and perpetual war. And it would seem so do the Libyans. Otherwise they would lift a finger to save the GNLA and stop Haftar.

You are so right. The Libyan dogs who betrayed Gaddafi have also seen that freedom Ameican-style didn’t work out well for them after all. Won’t be getting free baseball caps ,cards and hotdogs at all. Just oil looted.

So if the LGNA is western backed then why is General Hafter considered a CIA employee? https://www.veteranstoday.com/2019/04/06/as-american-citizen-and-cia-employee-general-haftar-takes-the-tripoli-airport/ What the fuck is going on here? Foreigners vs foreigners?

Just because the CIA tortured and brainwashed Haftar, it does not mean that he cannot break free of their control. Dilma Rousseff was also tortured by the CIA but regained her mind.

How about a no fly zone, so America can drop a million bombs on the desert?

LGNA is having wise spread issues with their communication system. The batteries in the “Free Phones” they received from their fonder are starting to fail.