As our old friend “mad dog” Mattis once said: “Sequencing the DoD budget is more damaging to our willingness to repel attacks than the enemy on the battlefield.”

It is clear, exactly how the protection of military spending for 2018 will work – they will raise hysterics about Russia-something:

“The US military spending has no space to grow. But they must increase from year to year – militarism creates additional labor. In principle, it is not very clear for now, what is more expensive: the mainland or boats that “protect” it.

Before the Russian Federation there were similar suspicions regarding China. It is believed that in 2007, terabytes of data concerning the F-35 Lightning II project, which later became the Chinese J-20, were stolen.

Then they also discussed and increased the costs of computerization. Oracle concluded the largest single contract in the history of the IT industry and everyone peacefully dispersed in their little home “to make all what’s needed”.

The Heritage Foundation and all the generals in the star-striped epaulettes make fun.

692 billion dollars is more than even requested by the US administration. Including a number of measures associated with the Russian Federation.

For example, $ 4.6 billion for the initiative to support allies in Europe to “contain Russia”. What this should mean is not clear, but surely the money will not be lost.

Everything is moving in the direction of increasing spending to the level of the Cold War times. 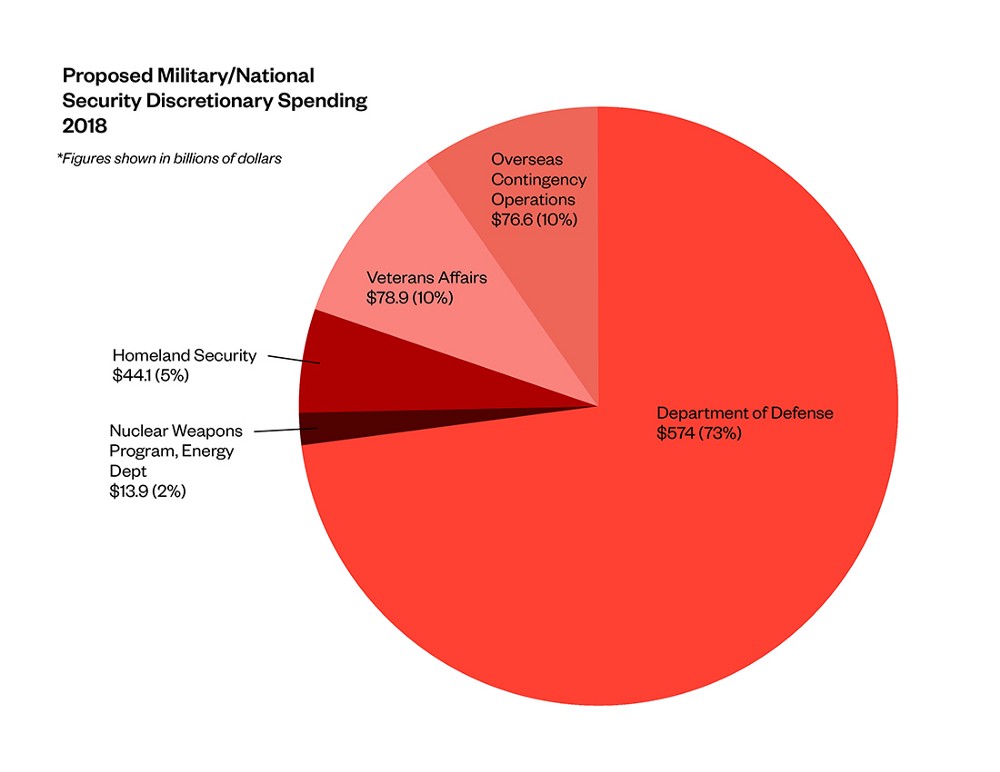 Military assistance to Ukraine is estimated at $ 350 million. Of this amount, half will be allocated only if the United States arranges the results of reforms in the military sphere.

How to measure satisfaction is incomprehensible.

$ 4.4 billion is allocated for missile defense, in particular for the deployment of additional interceptor missiles on the west coast of the United States to protect against the threat from the DPRK :-)

Here are the main investments in technology:

Hmm, what’s inside the last article?

There is non-disclosure paragraph.

However, in one part of the adopted document there is mention of the creation Chief Technology Officer position and specialized Cyber Command.

In the other part, there is a separate cut for contract work cost $ 30 billion, which includes software support and a special purchase of equipment.

Everything will be fine.

At the same time, the US proposes, by a long tradition, to increase the defense budgets of its NATO allies.

They got agitated and answered: will you protect us in any case?

Of course, Mr. Tillerson replied, but only from the threat from the East of the continent.

“Everything is moving in the direction of increasing spending to the level of the Cold War times.”

Whahaha – the social security percentage is up, because of your real unemployment rate of 20%+ and the fact no one can even afford their homes anymore. 40 million on food stamps. Every day people pray hey don’t need dical treatment.

It is a laughable, the US is a shit hole. Bloody hell; wake up and smell the coffee.

Graeme Rymill
Reply to  You can call me Al

The reason those numbers dropped because they dropped off the data collecting as their benefits ran out. Everything sounds well and good, as they say numbers can always lie.

Social security, Medicare, food stamps and the like are a lifeline for millions of Americans. The US Military budget is a death sentence for millions of people in “shithole” countries like Libya, Afghanistan, Iraq, Yemen, Syria and Pakistan. America is an existential threat to Iran and North Korea with Russia and China on the long-term list.

How much would be necessary to actually defend the 50 states and overseas territories? 5% of the current budget? Less?

With the exception of small, isolated groups like the Baader-Meinhof gang, terrorism is wholly the invention of the CIA. Who will mourn the death of the Anglo-American Empire?

Thought that was only UkroNazis and the US who were bad with numbers and why they bankrupted the Ukraine and then lost its autonomous states. The US has lost trillions of dollars and still no accounting for the losses , seems they are even worse at numbers. The cold war was reignited years ago by the US so they didn’t win anything but they had a chance at permanent end but threw that away.

Social Security and Medicare at 100% funded by the payroll tax while Defense spending comes out of the budget funded by income taxes and deficit spending. When the payroll taxes become insufficient to fund benefits, benefits are automatically cut to match payroll taxes.

Regarding true Defense spending as a percent of GDP in 2016, at least 4.4% if you factor in VA benefits and nuclear arsenal hidden under Dept. of Energy, and share of debt service from past deficit spending. https://upload.wikimedia.org/wikipedia/commons/3/39/US_Federal_Budget_Comparison_2016_vs._2015.png I didn’t spend the time to dissect and account for State Dept soft power budget, CIA, and military pensions.

Social Security spending as a percentage of GDP is meaningless – is a payroll funded program (for now) that has not added a single penny to the debt except as a ready means (thanks to Greenspan and Reagan) for the govt to rob from the future to pay for BS now.

Payroll programs contribute about 40% of total Fed revenues. Most mandatory spending is from dedicated sources – if the programs were eliminated you would have to eliminate the revenue sources and military spending as a share of the discretionary budget would remain unchanged – well over 50% and growing. Is also responsible for over 50% of debt service payments.

Based on totals, very little of the general fund is used to cover Soc Sec or Medicare shortfalls (about 12% of Medicare total spending and zero of Soc Sec). Federal Medicaid spending is probably the largest single culprit but is still less than 1/3 the military budget, not counting portions of the military budget spent through other channels. Other social outlays are insignificant compared to these line-items.

2.5 trillion dollars of US defense budget unaccounted for when Donald Rumsfeld assumed Sec. of Defense position in 2001 (under President George W. Bush). The missing funds were never found, and no explanation was ever forthcoming.