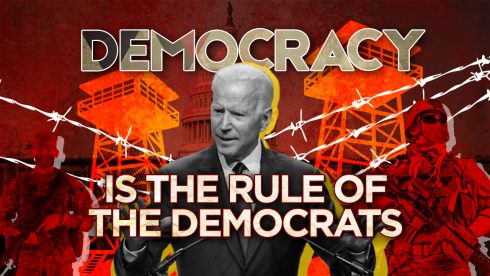 With inflation rising, the border crisis worsening, and Americans still trapped in Afghanistan, President Biden’s approval numbers are bad and getting worse. In a Quinnipiac poll released this week only 38% of those surveyed approved of the president’s job performance. On the Economy Biden’s approval rating is 39%, taxes 37%, immigration 25%, and foreign policy 34%. Of those polled only 42% believed the Biden Administration was competent. On the congressional front the Quinnipiac poll found that Americans favor Republicans over Democrats 46%-43%. In the Real Clear Politics poll of polls, Biden’s overall approval rating is 44.6%.

Meanwhile the epidemic of obscene anti-Biden chants spreads to sporting venues across the USA.

Against the backdrop of their terrible poll numbers, Democrats are battling Republicans in Congress. At issue are two pieces of legislation. The first is the bipartisan infrastructure bill costing $1.2 trillion. This bill has already been passed by the United States Senate and only awaits passage by the House of Representatives. Second is the $3.5 trillion reconciliation bill. Contained within are a host of Democrat goodies including expansion of Medicare and Obamacare, Green New Deal programs, dental insurance, universal daycare and the like. This bill is championed by Senator Bernie Sanders (D-Vermont), the House Progressive Caucus chaired by Representative Pramila Jayapal (D-Washington), as well as Representative Alexandria Ocasio-Cortez and ‘The Squad’ of firebrand leftists.

House Speaker Nancy Pelosi planned to pass both bills last Thursday, September 30th. But the legislative maneuvering grew complicated and eventually broke down. Progressives in the House refused to vote for the bipartisan infrastructure bill until the reconciliation bill is passed. But a group of moderate House Democrats thought the reconciliation bill was too expensive. More importantly so did Senator Krysten Sinema (D-Arizona) and Senator Bill Manchin (D-West Virginia). Both voted for the bipartisan infrastructure bill but refused to vote for the reconciliation bill citing its cost. Manchin has said his topline number on reconciliation is $1.5 trillion, which Jayapal’s Progressive Caucus insists is too low. Pelosi, unbale to gather enough progressive to pass the bills on Thursday, delayed the vote till Friday. But once again the progressives held firm. Pelosi had to extend the deadline once more, this time till 31 October.

Progressives have not responded well to the moderate’s intransigence. Activists kayaked to Senator Manchin’s houseboat on the Potomac River in Washington D.C. and heckled him. In Arizona leftwing activists accosted Senator Sinema after she spoke at Arizona State University and followed her into the bathroom. Activists later hectored Sinema on a flight back to Washington and again at Ronald Reagan National Airport. When asked, President Biden called the bathroom stalking incident ‘part of the process’. Bernie Sanders refused to sign a statement condemning the harassment of his fellow Democrat.

With the legislation deadlocked, Senator Manchin upended negotiations by insisting that the reconciliation bill include reauthorization of the Hyde Amendment. This is a legislative provision dating back to 1980 which bans federal funding of abortion. Nearly 50 years since the Supreme Court legalized abortion via the Roe vs Wade decision, abortion is still a contentious issue in the United States. Most polls show between 55-60% of Americans support legalized abortion in some form. About that same number oppose federal funding of Abortion. Manchin pronounced the reconciliation bill ‘dead on arrival’ without the Hyde Amendment. When asked if she could support a bill that bans federal funding of abortion, Jayapal said ‘no.’ Sanders is arguing that two Democrat senators cannot be allowed to hold up what the other 48 Democrat senators want. Of course combined with the 50 Republicans who oppose the reconciliation bill, Sinema and Manchin are in the majority.

And because matters aren’t complicated enough, the United States Treasury will run out of money on 18 October and needs to borrow more to fund the government. Right now, the Treasury can’t do that because of borrowing limits imposed by the Federal debt ceiling, which can only be raised by congress. Senate Minority Leader Mitch McConnell (R-Kentucky) refuses to help Senate Majority Leader Chuck Schumer (D-New York) raise the debt ceiling. McConnell says senate Democrats passed the reconciliation bill without the GOP, and they can raise the debt ceiling without the GOP as well. Schumer needs all 50 Democrats plus Vice President Harris to cast the tie breaking vote.

If congress takes no action, the US will default on its debt obligations and that could have devastating economic consequences. On Wednesday McConnell offered a deal to raise the debt ceiling which Schumer and the Democrats have tentatively accepted. Congress will raise the debt ceiling by $480 billion, enough to fund the government till 3 December. As of this writing McConnell is struggling to scrape together enough Republican votes to support the deal. Senate Democrats are claiming victory, but they’ll have to deal with the debt ceiling issue again next month.

These are the governments numbers as presented so this report is extremely conservative.

Also according to the CDC more than 396 million doses of COVID-19 vaccines were administered in the United States in just ten months from December 14, 2020, through October 4, 2021. During this time, VAERS received 8,390 reports of death from adverse reaction among people who received a COVID-19 vaccine. If you average the deaths to project a full year the adverse deaths would be 10068 among those who have been vaccinated.

There have been 396 million doses but many have been given in two stages. Only 216,000,000 people so far have actually taken the vaccine. So among those who have taken the vaccine, the one year death rate from adverse reaction would be .0046%.

Now Pfizer is releasing a vaccine for the 5-11 year old group. With a .0046% death rate from the vaccine and there are 20,212,000 children in the 5-9 year age group then their will be at least 929 deaths from adverse vaccine reaction.

Let me get this straight. In the 5-9 age group only 63 died in one year from Covid-19. But the Covid Vaccine, that is supposed to save them, will kill 929 in one year from adverse reaction.

That is almost a 1500% INCREASE in chances your child 5-9 years old will die from the VACCINE they are about to force on them. Can you say murder?

Not only is this projection conservative but on top of that those children who have already been exposed to Covid-19 have natural immunity so they do not need a vaccine anyway.

Age and Sex Composition in the United States: 2019 (census.gov)

If you have read and proofed the above statistical analysis and see that it is true, the author would like you to pass it along to whomever you can. This needs to get out before Pfizer starts injecting these children.

biden is easily the creepiest, perverted excuse for a “president” ever seen in the US.

The theft from citizens continues unabated and said citizens are completely unaware.