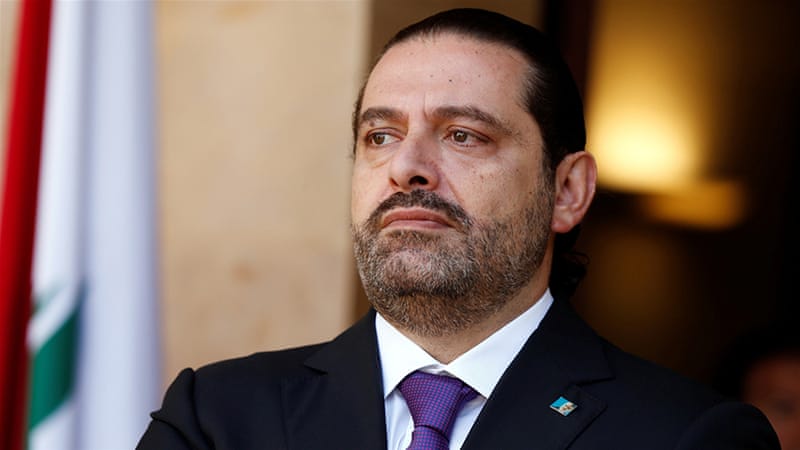 Lebanese Prime Minister Saad Hariri has accused the Syrian government of wanting him killed, in an interview published Thursday in French magazine Paris Match, according to France24.

“Hariri assessed that the regime’s military successes against rebels in the Syrian conflict were victories for presidents Vladimir Putin of Russia and Iran’s Hassan Rouhani rather than their allied Syrian counterpart Bashar al-Assad.

“I have a lot of enemies, extremists and the Syrian regime. The latter has issued a death sentence against me. They accuse me of interference in their country,” said Hariri, who was interviewed at his Beirut residence.

Hariri, who has made the same accusation in the past, says the regime in Syria was behind the 2005 assassination of his father, former premier Rafiq Hariri, in a car bombing on the Beirut seafront, a charge denied by Damascus,” France24 reported in the  issue.

On November 4, Hariri announced his resignation from Riyadh. However, he suspended this decision on November 22 following an alleged  request by the country’s president Michel Aoun to reconsider the decision.

Hariri is a compromise figure in the politics, mainly backed by Saudi Arabia and the United States. Over the montyh, Hariri has repeatedly criticized Hezbollah for the escalating tensions in the country and in the region, in general.

Screw that prick. The world has had enough of pawns like this. Politicians like Hariri hold back the ME countries from cooperating for the common good and sow division, reaping war, death and atrocities.

He just prostitutes himself for the Saudi oil- money…

And a cheap one at that.

Google is paying 97$ per hour,with weekly payouts.You can also avail this. On tuesday I got a brand new Land Rover Range Rover from having earned $11752 this last four weeks..with-out any doubt it’s the most-comfortable job I have ever done .. It Sounds unbelievable but you wont forgive yourself if you don’t check it fd176: ➽➽ ➽➽;➽➽ http://GoogleDailyConsumerSocialJornalsJobsReport1/easy/jobs… ★✫★★✫★✫★★✫★✫★★✫★✫★★✫★✫★★✫★✫★★✫★✫★★✫★✫★★✫★✫★★✫★✫★★✫★✫:::::fd176lh

you little maggot! it was the israelis would killed your father!

He was instructed by his sponsors in Riyadh, what to say…

THIS GAY HAS GONE MAD . LEBONESE PEOPLE SHOULD REMOVE HIM FROM THE POST BEFORE HE CREATE MADNESS DAMAGE TO THE COUNTRY. HE IS GOING ACCUSING EVERYONE ACCEPT ISRALIE AND SAUDI AND US. WHO WANT TO DESTROY LEBNON. GET RID OF THIS COWARD HARRIRI

HE IS ACCUSING EVERYONE EXCEPT ISRALI, SAUDI ARABIA AND US, because he is a traitor. He is a Spi of Israel, Saudi Arabia and America.

so if mossad or the saudis kill him we’ll know who’ll get blamed?

Ya kind of false flag . In fact he is more likely to be killed as false flag to be blamed on Assad

or perhaps Hezbollah on Assad and Iran’s orders.

Imagine the indignation of Bibi in front of the UN.

I would rather not :) Its sickening to watch such amateur theatre.

This Hariri guy is a inflected floppy drive.His creating job for fake news CNN and MSM.

Just like his Father. He’ll be killed by Mossad, and the West will blame Syria (and probably the Russians).

imaginable. the assads were always agressive shitmixers in lebanon.

covkie, remember occupation of bekaa, ignition of civil war in lebanon. the sins of fathers fall on head of sons. bashar pays the debt for politics of his father.

Just as you should pay for the sins of all your fathers Solomon. :)

If the same applies to this douchebag, that’s a different question. It’s not like Assad can do a lot anymore outside what remains of his country, nor has he much to gain by killing what is a nominal figurehead in Lebanese politics anyway. The real questions to be asked are who has something to be gained by seeing Al Douchebag killed or socalled forced from power and who has not. As far as Assad and Hezbollah are concerned, the current status quo in Lebanon serves them fine. If I were Al Douchebag I would be more concerned with my current employers. Either resigned or assassinated suits them perfectly fine. All they want is to reignite the old civil war. And since it would appear his resignation didn’t spark what they wanted, maybe his assassination will? I’d be looking a lot over my shoulder whenever I’m dealing with my employers if I were him.

But like I said before, the dude is an honorable man. Once’s he’s bought and sold he stays bought.

Someone should honour his wish. One look at him and you know he is nothing but gutter trash, sleazebag who shouldn’t hold any official position. Fit for the dungeons, where traitors belong.

How can Lebanese elected him as P.M??? He has no ball at all.

like putin, the ballless is elected again and again.

He’s partially right. Someone wants him killed, but that someone will be his friends in Israel and Saudi Arabia to use as a false flag attack on Lebanon. He probably should have resigned in Lebanon and avoided being used as a tool, that is, if he had a functioning brain.

are you already on the road?

Xanatos is just one of his many alias names. He’s probably in the air right now with a fake passport to Beirut. :D

He flatters himself methinks. Such an obvious Saudi Stooge is more valuable to Syria in the position he is in . Without any real power and demonstrating all too well the Saudi interference in the Sovereignty of Lebanon.

He no longer accuses Hezbollah of wanting to assasinate him because Nasrallah has promised to provide Hariri with Hezbollah’s protection if he stays on as Lebanon’s prime minister. But Hariri is too indignant (or maybe afraid?) to say it in public. There is a definate threat to Hariri’s life and that of his children in Saudi Arabia. But it does not come from Syria, Hezbollal or Iran. It comes from those who are blackmailing him, namely the Saudi tyranny and the Zionists.

Syria did kill his father so it is possible.

Maybe the Lebanese people will get so tired of this guys BS. That they will want to kill him. :)

BS, more like Mossad hit and false flag via proxy

What an ugly whore.

you take after him

I’m really worried about this hariri guy safety. First it was Hesbollah that was after him. Now it’s Assad (bloody dictator is threatening to gas attack this chick?) and I would not be surprised if tomorrow he says that even Putin himself is threatening this pure soul. Someone got to do something about it – UN should deploy peacekeepers brigade to defend this man otherwise Hariri might actually resign and that will be the end of Lebanon – it would not survive without such wise and loyal to his people leader.

you are worried? hm, i am not sure :DDD

Syrians want him dead? I’m not overly fond of this filthy ZOG stooge either…

This Hariri guy is now on laying spree like a Saudi Israeli propaganda prostitute.Instead of saying Saudi king confiscated his dollars he now accused everyone.

Why is Saudi Arabia not giving him asylum.Weakers lies of 2017.Hariri is a biggest risk of Lebanon in terms of Lebanon money and safety.

Saudis are toothless. Hariri fears for his life–probably for good reason. But it’s probably not the Syrians who are gunning for him.