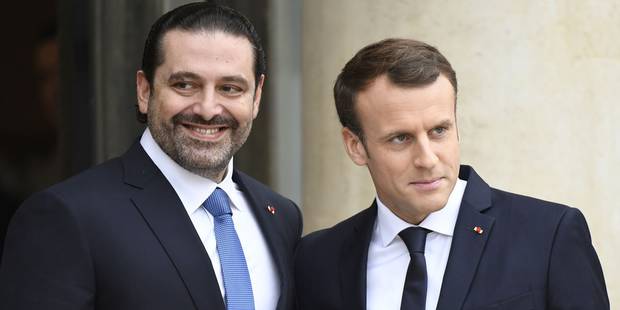 On November 18, Lebanon Prime Minister Saad Hariri arrived to the French capital, Paris, where he met with French President Emmanuel Macron. Previously the French presidency announced that France will host Hariri as the Prime Minister of Lebanon, although that Hariri resigned from position from Saudi Arabia on November 4.

After the meeting, Hariri said that he will clarify his position when he returns to Beirut and meets with Lebanon’s President Michel Aoun next week.

“With regard to the political situation in Lebanon, I will go to Beirut in the coming days, I will participate in the independence celebrations [on November 22], and it is there that I will make known my position on these subjects after meeting President Aoun,” Hariri said according to Reuters agency.

A senior French diplomat told Reuters that France believes the Hariri return to Lebanon is important. The official added that France is trying to de-escalate the situation in the region currently.

“Lebanon is being shaken so it’s important Hariri comes to Paris for us to work with him on the best way out of the crisis … We’re trying to create the conditions for a de-escalation in the region. We want to avoid a proliferation of crises that could get out of control,” the French diplomat told Reuters.

The fact that France hosted Hariri as the Prime Minister of Lebanon could mean that France believed that he was forced to resign by Saudi Arabia. Lately the tension between Lebanese Hezbollah and Saudi Arabia increased, epically after the Saudi government accused Hezbollah of supporting the Houthis in Yemen. The resignation of Hariri was seen as a Saudi response to Hezbollah.

The Kuwaiti newspaper al-Raqi reported on November 18, that Hezbollah forces have been brought to the highest combat-readiness level for the next 48 hours amid the growing tensions in the region. Another example of the increased tension in the region as a whole.

Does anybody have info about his family? So he went to France as PM? Good development. Apparently resignation did not result the intended effect, he said he’s ready to take back his resignation and now says he’ll lat us know after meeting with the Lebanese president. I’ll probably die of laughter if he hints the Saudi pressure for his resignation.

“While I was in Saudi Arabia I was presented with what now turns out to be fabricated evidence of my planned assassination by a party I trust. I believe this party has also been tricked blablabla.” But I hope the French told him they were going to hang him by his balls if he starts to provoke a Lebanese civil war.

I’ve read that his wife and family are with him , but his brother is still in Saudi . A rock and a hard place .

His younger brother, Bahaa Hariri is even wimpier than him and completely in Saudis’ pocket. They may try to invest in him, now that Sa’ad Hariri is burnt.

Qaddafi also relied on the french and they slaughtered him and thousands of Libyans and have made no reparations. Watch your back Lebanon.

Besides France is one of the US’s lapdogs.

The picture: two evil scam artists in suits and ties.

As long as there are Arabs like Hariri, Arabs will be in shit. Don’t undersatnd why people like their oppressors.

Yes, the French seek peace in the ME…just ask the Libyians.

On top of that, the French have started to side with SA and criticize Iran. The power of money.