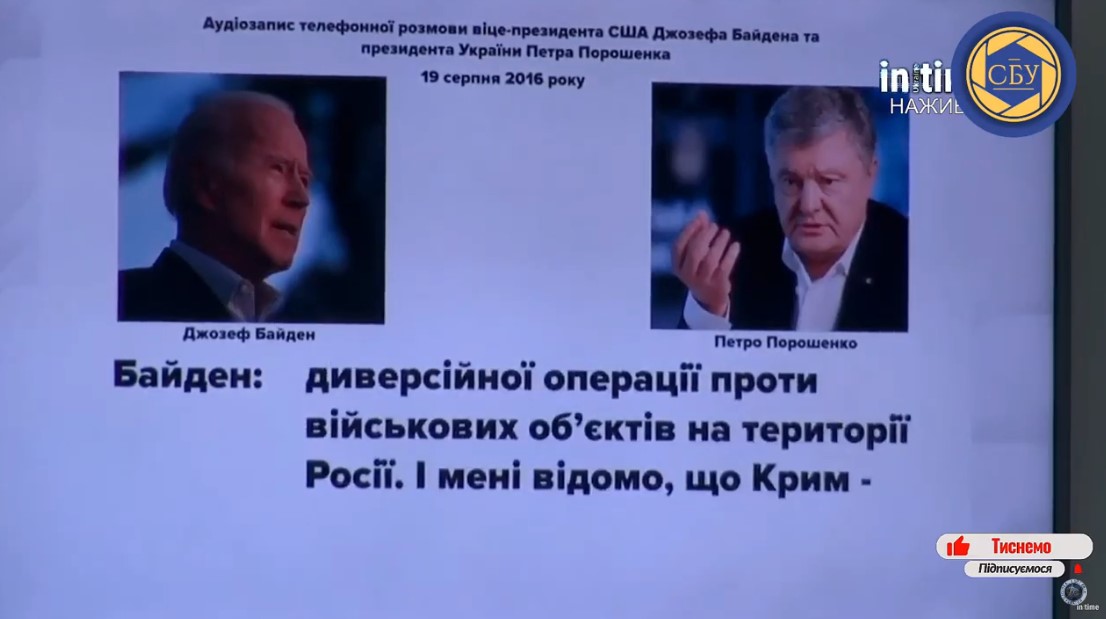 Since the rise to power of the current Kiev regime following the 2014 Maidan coup, it has repeatedly tried to stage terrorist attacks inside the Republic of Crimea. The goal of these efforts was to destabilize the situation in the peninsula and Russia as a whole, as well as to give additional political points to Ukrainian political leaders that became used to exploit terror, deaths and violence for their own causes.

At the same time, with the hypocrisy natural to the Ukrainian ruling class, Kiev was denouncing reports about failed terrorist attacks and Kiev-funded terrorists/intelligence agents detained by Russia as ‘fake news’ and ‘Russian propaganda’.

The recently leaked tapes of conversations between then Ukrainain President Petro Poroshenko and then Vice President of the United States Joe Biden in 2016 demonstrate that this terrorist activity was an open secret for the Kiev regime’s Western partners. Despite this, the United States was intenitonally covering attempts of the Poroshenko government to stage terrorist attacks designed to kill civilians (that Kiev calls ‘occupied Ukrainian citizens’) in Crimea.

The Biden-Poroshenko conversation leaked during the press conference of the Union of Blogers of Ukraine took place on August 19, 2016. During the conversation, Poroshenko and Biden discussed the attempt of Ukrainian saboteurs to break into Crimea, their attempts to condut terrorist attacks in the republic and clashes between them and Russian border guards.

HINT: On August 10, 2016 Russia’s Federal Security Service reported that it had prevented terrorist attacks in Crimea that were planned by the Ukrainian Defense Ministry’s intelligence agency. The FSB said that the Main Directorate of Intelligence of the Ministry of Defense of Ukraine was preparing to target the Russian peninsula’s critical infrastructure. A group of infiltrators was detected near the town of Armyansk in northern Crimea near the Ukrainian border in a special FSB operation over the weekend. Security forces found themselves engaged in a fire fight as the terrorists were being apprehended. Two Russian personnel were killed. 2 terrorists were eliminated, 7 others were detained. The rest of terrorists was able to withdraw to Ukraine with a direct help from the Ukrainian Armed Forces. The estimated number of terrorists: 3 groups (14 people each).

Then, Ukrainian President Poroshenko called the Russian version of events “equally cynical and insane”, while the United States Department of State supported the Kiev denial of attempts to carry out terrorist attacks.

Later in November 2018, Petro Poroshenko ordered to stage a military provocation in the Kerch Strait that led to a brief clash between a group of Ukrainian Navy ships and the FSB Border Guards. The Ukrainian vessels involved in the provocation were detained. During the past years, the FSB also repeatedly reported about smaller incidents involving attempts of the Kiev regime to destabilize the situation in Crimea and conduct terrorist attacks there.

As to the August 2016, the Kiev regime and the US conducted all what they were able to do to hide the truth. In the conversation with Biden, Poroshenko promised to hold responsible persons involved in planning the terrorist activity in Crimea. However, this did not happen. Instead, a month later, General Adriy Taranov, the deputy head of the Poroshenko administration died in an ‘accident’ in Kiev. General Valeri Kondtratuk took the post of General Taranov. In June 2020, Kondratuk became the head of the Foreign Intelligence Service of Ukraine. Therefore, the legacy of the terrorist activity of the Poroshenko regime is now kept by the administration of the current Ukrainian President – Volodymyr Zelensky.

Another part of the leaked conversation between Biden and Poroshenko was dedicated to the fate of Privatbank (previously the largest bank of Ukraine controlled by Ihor Kolomoyskyi) under direct orders from the International Monetary Fund and the US. The sitaution with the bank and the Ukrainain financial sector demosntrate how foreign forces were in fact controlling Ukraine.

The leak also reveals how Biden and Poroshenko were discussing the DIRECT MEDDLING into the 2016 presidential election in the United States. The Kiev government intentionally leaked documents with ‘dirt’ against Paul John Manafort (the head of current US President Donald Trump’s HQ during the election). As a result Manafort was removed from his post. While mainstream media outlets continue crying foul about the supposed Russian influence during the election process in the United Stateds, it was the Obama admisitration and its puppets in Ukraine that tried to influence the result of the election.

Another leaked audio record shows the double-faced approach of President Poroshenko towards the situation in Ukraine. Publicly, Petro Poroshenko was the strong leader with a harsh position towards Russia and the conflict in eastern Ukraine. The video below shows the conversation between Russian President Vladimir Putin and Petro Poroshenko on April 30, 2015. Two month ago the Ukrainian Armed Forces were smashed during the Battle of Debaltseve (Debaltsevo) by united forces of the Donetsk and Lugansk People’s Republic (DPR and LPR).

Andrei Ryazantsev, one of the top managers of Ukrainian Railways fired in 2020, also provided an insight look into how Ukrainian state companies are intergrated into the system of corruption involving foreign and local actors looting the country.

These insights clearly demonstrate that the regime created in Ukraine is not only corrupt and controlled from abroad (this is an open secret), but also a clearly terrorist entity, which is ready to use acts of terrorism and violence to achieve its political and economic goals. This situation did not change after the removal of Poroshenko and the rise to power of comedian Volodymyr Zelensky. The terrorist system of governance remained behind the brand of the new presidential administration. At the same time, the political and economic life in the country is under a de-facto control of foreign forces, first of all the Washington elites and structures of the global financial capital. These forces intentionally cover crimes and acts of terror conducted by the Kiev regime and its forces in order to continue looting the country and achieve own geoeconomic goals.

Although it is not politically correct, one thing must be said, the Jews are always on the side of extreme capitalism, the financial one, so to speak, even supported Nazism against the USSR even if this support cost the lives of many of their co-religionists, it is known in fact that the oil needed for the Third Reich war was supplied by Venezuela, at the time American possession, and by the companies that managed this oil, all were in the hands of the Jews, it would have been enough to stop the oil business and the war would not have been possible like the massacre of European Jews. This shows that money is the real god for Jews, and they would be willing to come to terms with the devil to achieve their goals, betrayal is in their nature. Today the same is happening in Ukraine, the pact with the Nazi devil is renewed to be able to earn more money and power, even if this jeopardizes the fate of their co-religionists, but what would never be done for the god of money? even sacrificing one’s family members can be an acceptable cost in view of higher earnings, and this is an adequately documented historical fact, beyond any reasonable doubt.

You don’t say… So when will he be sanctioned and by whom…?

Porkyshitko will cry and rage :)

What did Russia do in Gulag? As a famous man said:”You can only fight terror with terror”. Thats why we did it with Kiev. We fought terror to get freedom from Gulag!

Thank you for the inside from the retarded liberal mind.. Have a cookie now..

guilty untill proven innocent? How the fk can you come to a verdict if both sides of evidence null + void?

And so it is absolutelly logical and it makes sense that Turkey and Ukraine are best buddies.