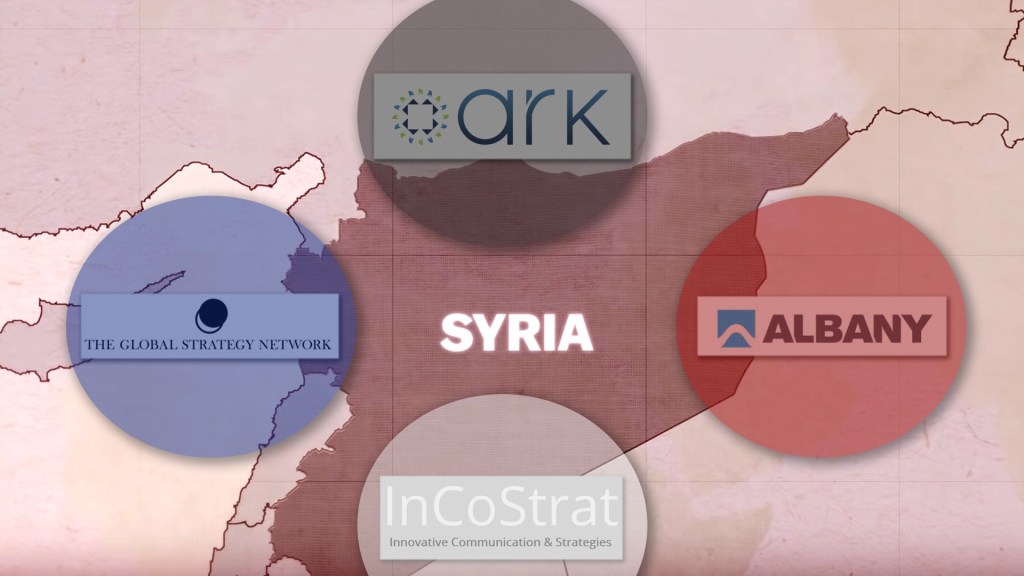 A bundle of leaked documents reveals how a plethora of Western government-funded intelligence cut-outs in the private sector trained Syrian opposition leaders in propaganda and psychological-media warfare operations, planted stories in media outlets from BBC to Al Jazeera, and ran extensive networks of journalists and media outlets to implement the propaganda operation.

A report by Ben Norton at The Gray Zone examines a stack of leaked documents that reveal how UK government contractors developed an elaborate infrastructure of media operatives, outlets and propaganda to generate expressions of support in Western and Middle Eastern media for Syria’s political and armed opposition groups.

Virtually every aspect of the media campaign and statements of the Western-backed Syrian opposition groups was directed and marketed by public relations firms, from the scripting of their political narratives and demands to the timing and location of their presentation to the media.

The leaked files provide detailed information on how Western intelligence cut-outs orchestrated both English- and Arabic-language media coverage of the war on Syria to generate a constant stream of pro-opposition media stories and coverage.

At one point, more than half of the stringers used by Al Jazeera in Syria were trained in a joint US-UK government program called Basma, which trained and advised hundreds of Syrian opposition media activists.

The Western government-funded PR firms manipulated the way the media covered Syria, and also produced their own events and pseudo-news stories which were distributed to and broadcast on major TV networks in the Middle East, including BBC Arabic, Al Jazeera, Al Arabiya, and Orient TV.

These UK-funded firms functioned as full-time PR flacks for the extremist-dominated Syrian armed opposition. One contractor, called InCoStrat, said it was in constant contact with a network of more than 1,600 international journalists and “influencers,” and used them to push pro-opposition talking points.

Virtually every major Western corporate media outlet was influenced by the UK government-funded disinformation campaign exposed in the trove of leaked documents, from the New York Times to the Washington Post, CNN to The Guardian, the BBC to Buzzfeed.

The documents confirm previous reports by journalists including The Grayzone’s Max Blumenthal on the role of the public relations firm ARK, a frequent contractor for the US and UK governments, in the fabrication of stories promoting the ‘White Helmets’ in Western media. ARK managed the social media accounts of the White Helmets, and helped turn the Western-funded group into a key propaganda weapon of the Syrian opposition.

Most of the leaked documents consist were produced under the auspices of the UK Foreign and Commonwealth Office. All of the firms named in the files were contracted by the British government, but many also were running ‘multi-donor projects’ that received funding from the governments of the United States and other Western European countries.

The documents also expose aspects of the UK government program to train and arm rebel groups in Syria, and how several Western governments worked together to build a new police force in opposition-controlled areas.

Some of the UK government contractors whose activities are exposed in these leaked documents were in effect supporting Syrian al-Qaeda affiliate Jabhat al-Nusra and its fanatical offshoots.

The documents were obtained by a group calling itself Anonymous, and were published under a series of files entitled, “Op. HMG [Her Majesty’s Government] Trojan Horse: From Integrity Initiative To Covert Ops Around The Globe. Part 1: Taming Syria.” The unidentified publishers of the documents said they aim to “expose criminal activity of the UK’s FCO and secret services,” stating, “We declare war on the British neocolonialism!”

The Gray Zone was not able to independently verify the authenticity of the documents. However, the contents and stated aims, objectives and methodologies advocated in the documents closely correspond with earlier reports covering Western destabilization and propaganda operations being run by Western intelligence operatives and contractors in Syria.

These include a leaked UK Foreign and Commonwealth Office report from 2014 which describes a joint operation with the Ministry of Defence and the Department for International Development to support “strategic communications, research, monitoring and evaluation and operational support to Syrian opposition entities.”

The UK FOC stated clearly that this campaign consisted of “creating network linkages between political movements and media outlets,” by the “building of local independent media platforms.”

The British government planned “Mentoring, training and coaching for enhanced delivery of media services, including digital and social media.”

Its goal was “to provide PR and media handling trainers, as well as technical staff, such as cameramen, webmasters and interpreters,” along with the “production of speeches, press releases and other media communications.”

Another government document from 2017 demonstrated the continuity of the program and provided additional details on the campaign to produce media narratives in accordance with the UK governments’ stated objectives.

One of the main British government contractors behind the Syria regime-change scheme was ARK FZC, which is based in Dubai, in the United Arab Emirates. It brands itself as a humanitarian NGO, claiming it “was created in order to assist the most vulnerable,” by establishing a “social enterprise,  empowering local communities through the provision of agile and sustainable interventions to create greater stability, opportunity and hope for the future.”

In reality ARK operated in large part as an intelligence cut-out that functions as an arm of Western interventionism.

In a leaked document that had been filed with the British government, ARK said it has produced materials on the war in Syria for the governments of the United Kingdom, United States, Denmark, Canada, Japan and the European Union.

ARK also claimed to have managed $66 million worth of contracts to support pro-opposition efforts in Syria.

In its Syria operations, ARK worked together with another UK contractor called The Global Strategy Network (TGSN), which is directed by Richard Barrett, a former director of global counter-terrorism at MI6.

ARK apparently had operatives on the ground inside Syria at the beginning of the regime-change attempt in 2011, reporting to the UK FCO that “ARK staff are in regular contact with activists and civil society actors whom they initially met during the outbreak of protests in spring 2011.”

The UK contractor boasted an “extensive network of civil society and community actors that ARK has helped through a dedicated capacity building centre ARK established in Gaziantep,” a city in southern Turkey that has been a base of intelligence operations against the Syrian government.

ARK trained all levels of the Syrian opposition in communications, from “citizen journalism workshops with Syrian media activists, to working with senior members of the National Coalition to develop a core communications narrative.”

The firm even oversaw the PR strategy for the Supreme Military Council (SMC), the leadership of the official armed wing of Syria’s opposition, the Free Syrian Army (FSA). ARK created a complex PR campaign to “provide a ‘re-branding’ of the SMC in order to distinguish itself from extremist armed opposition groups and to establish the image of a functioning, inclusive, disciplined and professional military body.”

In the course of one six month period, ARK reported that 668,600 of its print products were distributed inside Syria, including “posters, flyers, informative booklets, activity books and other campaign-related materials.”

ARK emphasized that it had “well-established contacts” with some of the top media outlets in the world, identifying among these Reuters, the New York Times, CNN, the BBC, The Guardian, the Financial Times, The Times, Al Jazeera, Sky News Arabic, Orient TV, and Al Arabiya.

With funding from both the US and UK governments, Basma developed into an enormously influential platform. Its Arabic Facebook page had over 500,000 followers, and on YouTube it built up a large following as well.

Mainstream corporate media outlets misleadingly portrayed Basma as a “Syrian citizen journalism platform,” or a “civil society group working for a ‘liberatory, progressive transition to a new Syria.’” The recently released documents have now revealed that it was a Western government astro-turfing operation to cultivate opposition propagandists.

The Western contractor published a map showing the principal locations of its network of stringers and media activists and their relationships with the White Helmets, as well as the locations of the newly created police forces across opposition-controlled Syria. 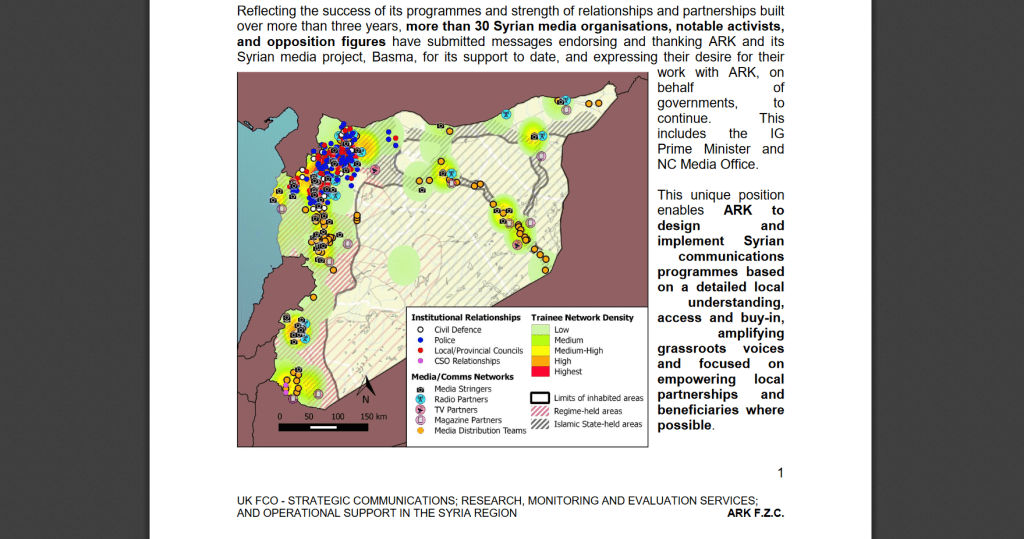 In its training programs, ARK instructed opposition spokespeople, taught them how to speak with the press, and then helped arrange interviews with mainstream Arabic- and English-language media outlets.

ARK described its strategy “to identify credible, moderate civilian governance spokespeople who will be promoted as go-to interlocutors for regional and international media. They will echo key messages linked to the coordinated local campaigns across all media, with consortium platforms able to cover this messaging as well and encourage other outlets to pick it up.”

To propagate opposition broadcasts across Syria, ARK designed what it called “Radio in a Box” (RIAB) kits in 2012. The firm took credit for providing equipment to 48 transmission sites.

The contractor ARK was also a central force in launching the White Helmets propaganda operation.

Another leaked document shows that in 2018 – which was apparently the final year of ARK’s Syria program – the firm billed the UK government 2.3 million British pounds for its activities.

The extensive ARK propaganda operation was directed by Firas Budeiri, who had previously served as the Syria director for the UK-based international NGO Save the Children. Approximately 40% of ARK’s Syria project team were Syrian citizens, and another 25% were Turkish.

In the leaked documents, another UK government contractor called Innovative Communications Strategies (InCoStrat) boasted of building a massive “network of over 1600 journalists and key influencers with an interest in Syria.”

InCoStrat stressed that it was “managing and delivering a multi donor project in support of UK Foreign Policy objectives” in Syria, “specifically providing strategic communication support to the moderate armed opposition.”

Other funders of InCoStrat’s work with the opposition in Syria, the firm disclosed, included the US government, the United Arab Emirates, and anti-Assad Syrian businessmen…

In one document, the firm said it been involved in other Western-backed regime change operations, including running training programs for civil society organizations in marketing, media, and communications in Afghanistan, Honduras, Iraq, Syria, and Libya.

In addition to securing contracts with the United Kingdom, InCoStrat claimed that it has worked for the governments of the United States, Singapore, Latvia, Sweden, Denmark, and Libya.

Nothing strange in this. Normal people for many years has known USA, UK and France are allied in this and do things on all levels to kill the target.

But interesting with more details.

Parts of this of course has been more or less hidden. Its a part of warfare. I see too much here from people expecting and hoping their enemies behave as sitting ducks.

The proof of what we knew to be true has at last been exposed. Unfortunately, a lot of damage has been done by these rats. Nonetheless, it is good to have this proof out in the public domain

A rather tame and obvious “revelation”, especially after finding out the Ziocorporate terrorists/ISIS/al-Qaeda used the OPCW accuse Damascus with a staged “gassing their own people” to launch a missile strike.

You left out SOHR, the MI6 asset.