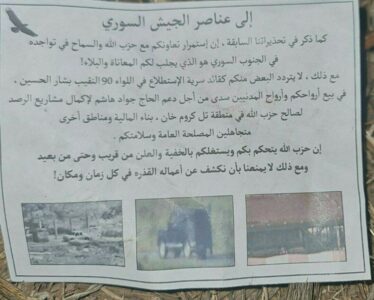 Following the Israeli air strikes on positions of the SAA and Hezbollah located in the al-Quneitra governorate, the locals found the leaflets that were warning Syrian soldiers against collaborating with Hezbollah.

The text on the leaflets reads:

‘As we have already warned earlier, the conrtinuation of your cooperation with Hezbollah and their presence in the south of Syria with your connivance – all this entails suffering and pain!

There are those among you who do not hesitate: for example, the commander of the reconnaissance company of the 90th brigade, Captain Bashar al-Hussein. He is trading your lives, supporting Haj Jawad Hashim (head of the organization’s “Golan File” in Syria), carrying out Hezbollah surveillance tasks in the Tell Krum Khan area and other regions.

Hezbollah rules you and is preying on you. So don’t stop us from uncovering their dirty activities always and everywhere!’

Shaito, also known as “Jawad Hashim” and “Haj Hashim,” is reportedly one of Hezbollah’s top commanders in al-Quneitra and a personal advisor to Brig. Gen. Hammouch.

In May, the Israeli military dropped leaflets with photos of Lebanon’s Hezbollah commander over the Syrian al-Quneitra governorate.

The IDF is often warning Syrian service members in southern regions against collaborating with Hezbollah in leaflets. The similar leaflets were dropped following a series of strikes by Israeli combat helicopters on the northern countryside of al-Quneitra in May.

States like Lebanon, Palestine, Jordan or Syria don’t fare any better though, maybe except for Jordan.

The next ??? . They invented terrorism when they blew up the King David Hotel

Leaflets will not help the zionist terrorist squatters.

That letter sounds like something the Nazis would have dropped on the warsaw ghetto before the Nazi attack,i would treat it the same way,my answer would be Bollocks!!

Thin threats. The party is the only one defending Syria against Daesh, HTS and Israel.

Ba’ath party has turned Syria and Iraq into Orwellian states.

I’m sure Russia helped them with their leaflet campaign just like they help Israel with their bombing campaign.

By helping you mean by standing aside and not interfering with the IAF . An agreement Russian and Israel have had from the beginning as long as Israel doesn’t go near Russian assets .

All Bolsheviks were jews except for Stalin, the maggots got a better offer from Truman, Eisenhower, Kennedy, Johnson, Nixon, Ford, Carter, Reagon, Bush, Clinton, Bush, Obama, Trump, Biden and Gorbachev however now as we communicate Bennett the jew maggot is crawling to brother Putin hoping for a Gorbachev benefit.

The jew love China and China remembers how the Israeli weasels voted for Taiwan to represent China at the UN 50 years ago.

USSR was not so luckily the homosexual Sid Loder was in full flight getting ripped off by the jew Freemason swine, they murdered my mother you know. God is great and exacts vengeance (swt).

What the fuck are you on about? I swear to fucking God, you Easterners have a worse grasp of the English language than Lil’ Wayne. At least Arkansas trailer trash can string together a coherent sentence.