Andrzej Duba is seeking to become a leader of the planned Russophobian coalition to cut the Russian Federation from Europe. 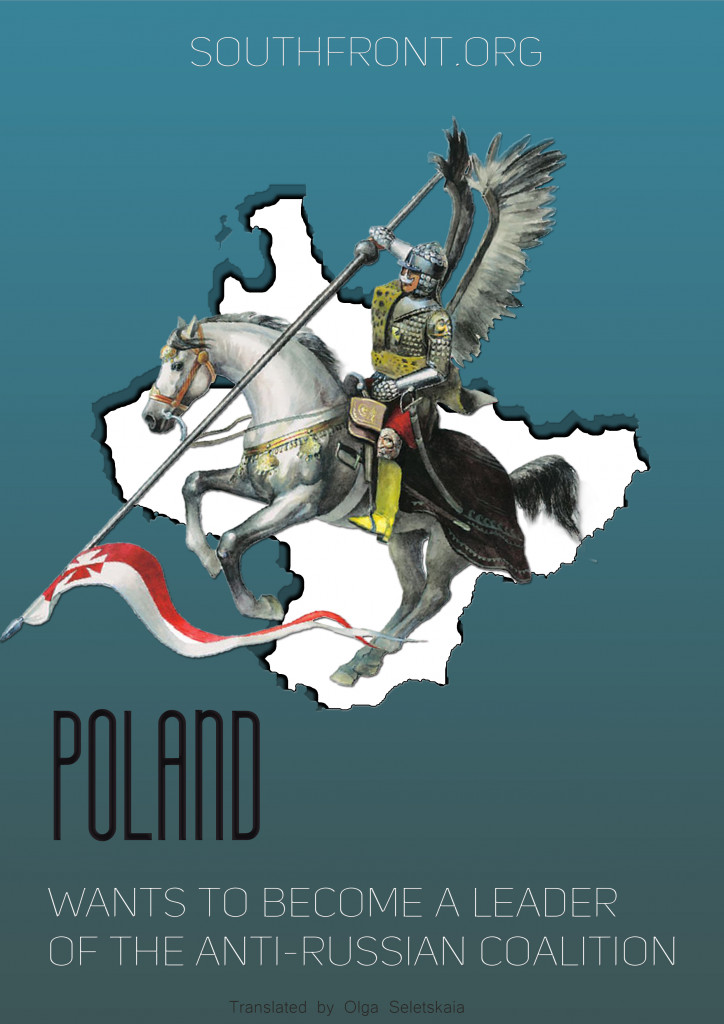 This article originally appeared at Vzglyad, translated from Russian by Olga Seletskaia exclusively for SouthFront

President Andrzej Duda made ​​his first foreign visit. It was Estonia that was chosen for his first visit as a President: Estonia is one of the most loyal NATO’s allies. The dates of the visit were also very symbolic. Anti-Russian rhetoric will help Dude to strengthen his image before the upcoming NATO summit in Brussels, where he intends to position himself as a leader of the emerging pro-American anti-Russian coalition.

President Andrzej Duda started his first foreign tour. The trip started with a visit to Estonia, where Duda met with the President and Prime Minister of Estonia and discussed important for both countries issues – namely, strengthening NATO’s presence in Eastern Europe. Next Duda’s stops are Germany, London and New York. In all countries, he will pursue the main goal – to increase the number of permanent NATO bases in Eastern and Central Europe, including Poland.

Andrzej Duda arrived in Estonia on August 23. The date was chosen on purpose: it is the Day of Remembrance for Victims of Stalinism and Nazism in Europe. On this day the fateful Poland Molotov-Ribbentrop Pact was signed, which included a dissection of the country between Germany and the USSR. According to the Pact, Estonia became a zone of interests of the Soviet Union.

The main agenda of the presidents of Poland and Estonia was national defense and protection. Andrzej Duda again spoke with Toomas Hendrik Ilves on the need of new NATO bases in his country. According to the Polish president, the troops of the alliance should be positioned right where the real boundary of countries– NATO members with their eastern neighbors lies. “We welcome (NATO) and expect friendly allies to deploy army troops and weaponry in areas where the eastern flank of the alliance is located today”, – quoted Deutche Welle Duda’s words. “NATO should react to the revival of imperial tendencies” – said Duda at a press conference, AP reports. The media specify that he did not mention Russia in his speech.

The President of Poland sounded rather soft compared with other Polish senior officials. For example, Defense Minister Tomasz Semonyak said in June that they should be ready for war with Russia. Duda’s advisor Krzysztof Schersky, known for his anti-Russian rhetoric, urged NATO not to block the decision on the construction of military bases in Poland. It is Germany that is now opposing President Andrzej Duda’s idea.

Toomas Ilves supported his Polish counterpart. “If we have the security guarantees, it might scare somebody off from potential aggression,” – “Interfax” quotes the president of Estonia .

“The events in Ukraine remind us that freedom is not taken for granted. We should work every day, at our home, with our allies in Europe and across the Atlantic to keep our freedom. Estonia sees a clear role of Poland as the leader of cooperation on security in the region, and the best example of this is the upcoming NATO summit in Warsaw, – said Ilves. – Our allies have done a lot to enhance security in the Baltics and Poland; look at the air mission over us, and the constant rotation of ground units will be our next joint step. It will clearly show that we, as members of the EU and NATO, are the best and most reliable allies in the world, “- the Baltic news agency BSN reports Toomas Ilves’ words.

Ilves also stressed the importance of the Duda’s visit on date of the anniversary of the signing the Molotov-Ribbentrop Pact. “And Estonia, and Poland – we know and remember what price a lot of people paid for this secret deal,” – he said.

Estonia Ahead of the Engine

Duda also met with other senior officials in Estonia, including Prime Minister Taavi Rõivas who has spoken openly about the need to put pressure on Russia. “Estonia and Poland are close to understanding the sense of security. It is expressed in relation to the conflict in Ukraine. We must continue to support Ukraine and to remember that the situation there has not stabilized. We believe we should continue sanctions against Russia until it will restore the territorial integrity and independence of Ukraine”, – RIA” Novosti quotes a statement of the Estonian prime minister.

Estonia fully supports President Duda’s policy to strengthen NATO in the region. On August 7, Defense Minister Sven Mikser stated the need to update the defense plan by its strengthening in the Baltic States. “To be prepared to respond, NATO should update defense plans, develop warning systems, preliminary deploy weapons and equipment, and allies should be here (in the Baltics),” – Mikser said at a meeting with a US Congress delegation, reports “Interfax”.

Estonia is part of NATO since 2004 and it is one of the most responsible allies in the region. For example, Estonia not only met, but even exceeded the plan to allocate budget funds for defense, requested by the NATO leadership to the participating countries. It is about to achieve 2 per cent of GDP. Estonia is planning to spend 2.05% in 2015 on military needs. Poland, for example, still falls short to the required numbers: it plans to spend only 1.95% of its GDP. Thus, from the countries – members of NATO – Estonia is the second largest expenditure for defense; the United States is the first.

Estonia, Poland and Latvia, Lithuania and Romania are part of the American project of so-called New Europe, – former Sejm deputy, the director of the European Center of Geopolitical Analysis Mateusz Piskorski says. “In addition, the United States considers this group of countries as a springboard for the development of anti-Russian plans – both political and military-strategic,” – he said in an interview with the newspaper VZGLYAD. Piskorski said that in 2003-2004, there was a similar situation when those countries supported the US policy in the war in Iraq, contrary to the position of the old EU member states – Germany and France.

The expert noted that the Andrzej Duda party’s leadership, ” Law and Justice ” is closely connected with the non-conservative circles in the United States. “Therefore, the Polish president is now, in fact, engaged in realization of geo-strategic plans of the United States, where, most likely, he receives the orders from; and Andrzej Duda, as well as his party, are just politicians who are willing to unconditionally fulfill all orders,” – said the source.

Piskorski said that a summit of Eastern countries-NATO members will be held in Bucharest in November; and Duda’s trip to Tallinn is part of a preparation for the summit. He tries to act as a leader of anti-Russian coalition. According to Piskorski, it proves again that there is “an attempt to build with the countries of Eastern and Central Europe ” a new anti-Russian Europe.

Elections As a Sobering Factor

It depends on Washington, if Duda’s proposals to establish NATO military bases on the eastern flank of the alliance will be implemented. “Before the presidential elections, the US will not agree to such an unpopular move. If the Republicans, non-conservative candidates of the United States, win, they will be ready to implement these plans, despite their criticism from the other members of NATO, such as Germany. German Foreign Minister Frank-Walter Steinmeier, strongly objected all the ideas related to the establishment of a permanent NATO bases in Eastern Europe – the expert noted. – In any case, it will be neither Mr. Duda, nor his friends in Eastern Europe who will make the decision.”

Andrzej Duda also does not forget about the upcoming parliamentary elections in Poland. He remembers that Bronislaw Komorowski’s anti-Russian rhetoric, as well as his close friendship with the Kiev authorities ended up with his defeat in the presidential election, and Duda does not want to repeat those mistakes, said Piskorski:
” So now Andrzej Duda does not focus on the hostile statements against Russia, but he does so indirectly, by calling for the establishment of NATO bases. We do not see direct anti-Russian rhetoric, and it’s because of the election campaign. Once the parliamentary elections are over, we can expect the return to the tough anti-Russian rhetoric, which is very typical of the Andrzej Duda’s political environment “.

Russia will formally respond to the Duda’s statement on the establishment of NATO military bases on the eastern flank of the alliance, says the director of the International Institute of the newly-emerged states Alexei Martynov. “The Russian Foreign Ministry can respond, for example. But tactically, Duda said nothing new,”- said the analyst in an interview with the newspaper VZGLYAD. He explained that the Polish politicians who manage to get to the top position, as a rule, strictly follow the instructions of their American curators. “Therefore, Duda’s statement in the Baltic States quite fits in the logic and discourse of his previous colleagues”, – he said.

The expert also pointed at the importance of the forthcoming elections in Poland and how Duda’s statements depend on this factor. It is the Sejm that forms a coalition, the government, and it approves the prime minister, who will concentrate in his hands all power in the country. “The president is a nominal figure; his main job, in addition to interference with the Government’s work, is to make a variety of statements, to pay official visits to other countries, and in this case, to voice those notes, which are sent to him from Washington, ” – summed up Martynov.