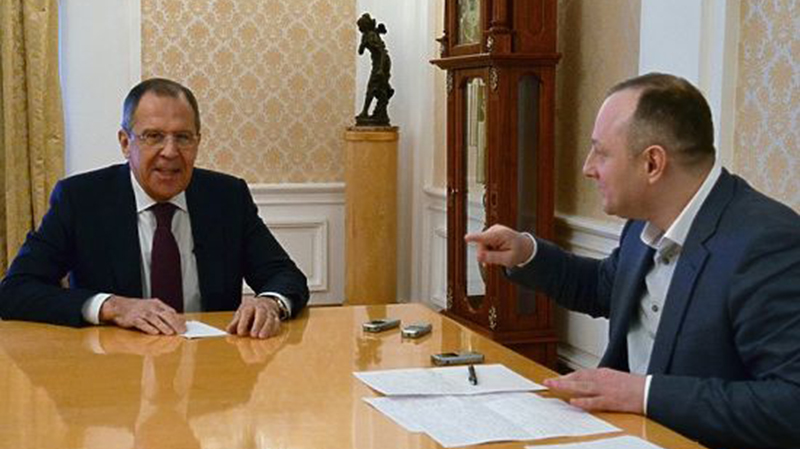 Contrary to the diplomatic tradition of not saying anything important or specific in public, Lavrov in his big interview with Moskovskiy Komsomolets openly said that 1) Russia offered the US to fulfill several “simple” conditions to implement the Syria ceasefire; 2) the situation can now evolve into one of three variants: negotiated compromise, Assad’s military victory, and a large war with the participation of all the outside actors. Lavrov also made it clear that in spite of all the threats issued by NATO and Turkey, the US and EU are not ready for the third variant, the only question now is who will force whom to accept their terms at the negotiations concerning Syria’s fate; 3) Turkey, in spite of all of its threats, is unlikely to dare start a full-scale intervention in Syria now that Russian Aerospace Forces are deployed there.

1. “Without revealing too details, I’ll note that unlike those, including our US colleagues, who constantly demand an immediate ceasefire which is something that US allies in the region are against because they insist the question of ceasefire can be discussed only after Bashar Assad leaves, we have proposed to Washington a specific scenario which they have taken under consideration. Secretary of State Kerry has referred to it in his interview. I hope that our simple proposals will not take Washington too much time to consider.”

Having surrounded Aleppo with Assad and Iranian forces, Russia now holds a gun to the terrorists’ head and, addressing the terrorists’ panicking bosses, it listed several conditions for the negotiations. They are quite simple—call off your terrorists, leave Assad’s political opposition, and let them work out the details of constitutional reforms and, more cynically, of dividing Syria into spheres of influence while maintaining the country’s sovereignty and integrity. If the terms are not accepted, the encirclement will close, Aleppo will be cleared of terrorists, the border with Turkey taken under control—and then your militants will be deprived of your aid.

2. “The famous Russian scholar of the East, Vitaliy Naumkin, recently told me that he sees three possible scenarios for Syria: compromise in Geneva, military victory by Syria’s government forces, and a large war with direct participation by several outside powers. Do you agree with that assessment? If so, which of them seems most probable to you?
Lavrov: I agree, all of that is on the table. If the negotiations are not successful or they are not allowed to even begin, then the emphasis will be put on military solutions.”

Having agreed with Naumkin’s assessment, Lavrov made it understood that the only alternatives to a compromise in Geneva is a complete military victory by Assad or a full-scale war with NATO participation. Because both Turkey and Saudi Arabia underscore that they will send their forces into Syria only as part of a US-led coalition. That sounds menacing, but it actually means that they will not go into Syria without the US. Here one has to remember that both the US and NATO launch military interventions only against those who were weaker by a couple of orders of magnitude and could not inflict heavy losses. Russian Aerospace Forces’ presence in Syria radically changes the situation and is the main obstacle to an intervention. The “emphasis on military solutions” may be what they want, but words and actions are not the same thing.
3. (Answering the question concerning what Russia would do in the event of a full-scale Turkish invasion into Syria) “I don’t think that will happen, because small-scale provocations which I already mentioned (tent cities, fortifications 100-200m into Syrian territory several kilometers in length) are not the same as a full-scale invasion. I don’t think the US-led coalition which includes Turkey will allow such irrational plans to materialize…We have taken all the necessary security measures: our bombers no longer fly without fighter cover. We’ve deployed S-400s and other air defense systems, which guarantee the airspace used by our pilots will be protected.

Acknowledging that NATO and Turkey are issuing one threat after another, are conducting preparations for an invasion, commit minor border violations and—attention—are discussing with ISIS what to do next, as well as are preparing corridors between Kurdish forces in order to supply the militants, Lavrov is confident that in spite of all that Turks and their masters will not dare start a full-scale land war on Syria’s territory. He also implied his confidence is not baseless, but rather founded on the presence of Russian air defense systems. I believe that’s a wholly reasonable reason to be confident.

By calling spade a spade, Russia on the one hand grabbed the Western terrorists by the threat and warned them that a direct Turkish intervention in support of the terrorists will lead to losses, and on the other it is offering the US negotiations on its terms. Negotiations which are open to compromise on internal Syrian matters, but categorical when it comes to the principle of the matter: first the terrorists are expelled from Syria, then we decide Syria’s fate.

Lavrov made another important point which did not address a specific international issue but was universal in its character: the choice between sausage and honor. Remember these words, those of you gentlemen who criticize the contemporary Russian state, so that in the future you will not write nonsense and won’t be saying that you don’t understand Russia’s foreign policy principles:

“You could say that you want a piece of bread with sausage and jam with your tea because “who cares about Crimea and what’s happening to the Russians there or about the coup.” Or you choose a different path. I will never be in favor of entirely ignoring economic interests, the necessity to establish favorable conditions for our economic development and growth. A country like Russia cannot “spin like a weathervane” depending on what is desired by the world’s powers-that-be who believe they decide the fate of all countries and peoples on this planet.”

That’s why the “powers that be” want to destroy us. Just as they did during the tsarist and Soviet times. Even thought we are prepared for compromises among equals, we are not a weathervane and cannot be bought with sausage. Period.

I do not agree with Lavrov that the Hegemony won’t dare launch a real invasion of Syria. The mad Turks are mad enough to do it because they believe they can pull NATO into siding with them.

yes, you say it. on the top, Erdogan, dönmeh, risks his own head. I mean, he lost already. He has made troubles to EU NATO countries with his behavior. He has pissed off US by taking Chinese rockets instead of Patriots. He has pissed off US a second time in Iraq. The guy will not die in a bed. The guy should have watched carefully the video of Saddam’s hanging.

The filthy Turks did not buy the Chinese AA missiles in the end. I think the Americans blocked that deal because of NATO membership and integration of systems.

I do not agree on that part either. You can never underestimate the recklessness of the psychotic Jews who control Obama, and recklessness of Turk and Saudi morons. Loss of life is a not factor of consideration to these retards.

I think NATO is yanking Turkey’s strings, throwing the Turks under the bus to get a conflict started and what bank will finance Turkey’s demise? JPM?

So is Russia buying or selling sausage with the Israelis?

sausage?? Is this a literal translation that makes no sens in English or some reference too obtuse to understand – like ref to Germans or something?

For russians the term “sausage” (Kalbassa) means “food”. For english, a better term would be “butter and bread”. I agree it is not properly translated. Sausages are not used as often in the rest of the world.

Sausages are very popular here in America. Bratwurst,Kielbasa,Chorizo,Breakfast sausages of all kinds and of course the Hot Dog With Mustard.Yum!

Lavrov is a master diplomat!!!

Seems a reasonable human being. We need some of those in our government.