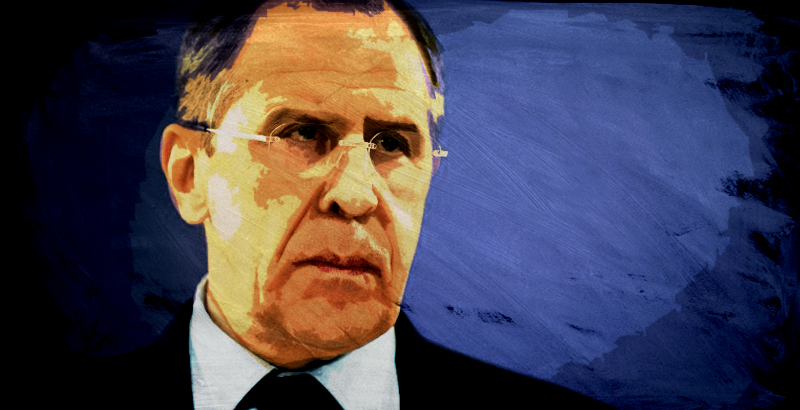 Russia’s Foreign Minister Sergey Lavrov said at the 71st Regular Session of the UN General Assembly in New York that it’s important crucial to avoid the collapse of the US-Russia agreements on Syria.

“The main thing now is to prevent the collapse of those arrangements, objectively and impartially investigate the undermining incidents in Deir Ezzor and Aleppo, particularly, that there’s many who want to sabotage the agreed approaches to the Syrian settlement,” he said during the general debate.

Lavrov emphasized that “it’s essential to fulfill the UN Security Council demand to dissociate the so-called moderate opposition from the terrorists. Here, special responsibility rests with the US and the members of their coalition.” “Their refusal or inability to do this in the present circumstances can’t but strengthen the suspicion that it’s being attempted to remove Jabhat al-Nusra out of harm’s way and that the plans for a regime change are still on the table.”

Very clever to tie the investigation of Deir Ezzor and the convoy bombing to the hope of salvaging the latest agreement. Of course the idiots in U.S. media are still writing articles on ‘why Putin wanted the ceasefire to fail’. It must be nice to make a living where you just pull stories out of your rear end and never bother yourself to actually read publicly available statements by people like Lavrov.

To U.S. political writers, why read Lavrov’s comments when you can conjure up your own words and attribute them to Lavrov’s mind?

That is why US will never come to an agreement because of underlaying currents within its government. The neocon current is always willing to sabotage anything that undermines its plans. The neocons live in the world whereby they think US is invincible and subsequently their reality and actions project their grand delusion.

Replace neocons with Jews and you got it.

I thought you knew most neocons are Jews.

Of course I knew.

I don’t think it maters to Lavrov how the US media spins this. He’s knows the USA isn’t bargaining in good faith. He know the USA has told their Gulf Arab and Turkish allies they will deliver a Sunni run Syrian state and the US’s credibility’s on the line and with it confidence in the $USD as a reserve currency.

The more Lavrov presses for a ceasefire the more obvious it becomes that the USA has either lost control of the “moderates” in Syria or is an agent of chaos or both and the tantrums at the UN and knocking the chess pieces off the board last week then saying “Russia did it” is just evidence of those facts.

I think Lavrov knows he’s beating his head against a wall but is playing to EU members and other American allies. He’s demonstrating that the USA doesn’t have control of either the “moderate rebels” or the situation as a whole in Syria and driving a between the USA and EU countries that are already soft on continuing sanctions on Russia.

If you think the refugee crisis in Europe is bad now imaging what it will be like if the USA has it’s way and Assad is replaced with the Sunni caliphate because that’s what will happen if the US plan is allowed to come to fruition. All those Christian, Druze, Shia, jews, Alawites …… will persecuted or driven out of Syria and that’s the last thing EU citizens want.

Like they say…..Russia is playing the long game and right now they are in a win-win position. Assad stays they’ve defeated the USA …..Assad’s defeated the fallout is on the USA’s shoulders.

Why tie them? Russia didn’t bomb the UN convoy-or did they? Conflating the two events is ridiculous. Russia knew when and where the convoy would be.

He is only demanding that both events be investigated in order to find out the facts of the situation. They are both related only in the sense that they interrupted the continuation of the ceasefire agreements. He is not conflating anything, just establishing two different agenda items for the same larger issue, the Syrian peace process.

BS, he is conflating.

Conflating? Of course Russia did not bomb the aid convoy, why would they/ It only serves the interests of terrorist, who don’t aid to be delviered to areas controlled by them, and USrahell, in this case they are interchangeable, so they can blame Russia, like with Crimea, MH17, etc. The only conflation this LGBT troll likes is when he is doing a blow job. .

MH17 report will be available on the 28th, you only know what you are told, because you are a returd. Did you find that Turkish bath that you google’d?

Report by whom? The usual jew-yankee sources will always blame Russia prior to any investigation. I have read lots of scientific reports on that, granted by pro-Russian sources. Just explain to me why Ukronazi air traffic controllers detoured the plane to a conflict zone, to blame Russia. I can see through Jewish plots, but you are blinded, should I write blynded? because you wrote returd, which shows that you are just a USeless Stupid Amurican. The only contribution this cheap troll ever made is the invention of the neologism “fuqtard”, he should put it in the Oxford dictionary.

Holy shit! Lavrov never learns, you cannot make agreements with USrahell, how many times do they have to phuck you until you understand?