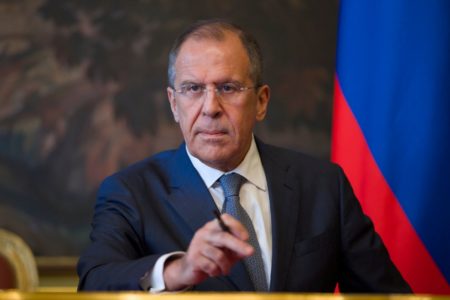 Russia has no evidence that the US-led coalition combats militants of Hayat Tahrir al-Sham (formerly Jabhat al-Nusra, the Syrian branch of al-Qaeda) in Syria, the country’s foreign minister Sergey Lavrov said on February 23.

“The Nusra Front is not being targeted. We still have no evidence that the US-led coalition considers the Nusra front as a target for its military campaign,” Lavrov said at a news conference in the Russian capital Moscow adding that the group is a major obstractle of reaching a ceasefire in the war-torn country.

The diplomat continued saying that militants use civilians in Damascus’ Eastern Ghouta as human shields in order to put the blame for any casualties on Syrian forces and their allies.

“A lot of questions arise on how the media campaign seeking to accuse Damascus and its allies in the anti-terror fight of violating international humanitarian law is being conducted,” he said.

Lavrov added that mainstream media use the information about alleged humanitarian law violations that have been presented by the White Helmets – the group created with the help of and backed by the US and the UK.

They won’t find any evidence as the terrorist Al Nusra is the creature of USrael !

Even Lebanon was part of Syria before France create Lebanon from nowhere.

Defend your f….ing country and expect nobody to do it for you. The west is cutting Syria since I don’t know when but these stupid Syrians seem to love their westeners masters. XD.

errrr, there was no Syria till 1918 (at best)…what you see as (historical) Syria is just the french mandate after WW I ..it is totally artificial like most arabic states in the near eastern.

There was a self-declare kingdom of Syria in 1918. But, after that, the west came and divide the country.

Lebanon, Palestine, Jordan and Syria are one country. They all speak the same language and have the same culture.

Hide Behind
Reply to  Serious

THERE HAS BEEN AS FAR BACK IN HISTORICAL RECORDS EXTANT A LAND NAMED SYRIA. If one came out of Syria named Abraham and that is an accepted notion by faith of three religious organizations, I think a Cananite would of called him a Syrian. BUT WHO REALY KNOWS. There was once a time when homoerectis never have a damn where he was at, he just wanted to eat. Kill, and fornicate. Just as do the primarily white military males in uniform do today IS military wives are paid to spread legs breed more soldiers for future wars. While early warriors only got what spoils were left

Frank Behrens
Reply to  Hide Behind

Syria ? There was no such country ever,,,that is a region, (name of a region) like Mesopotamia. Syria derives from the ancient As-syrians (semitic people but not arabic speaking) and the Assyrian kingdom consisted of quite different regions (parts of modern Iraq, Turkey, Jordan, Israel and even Iran).

the west (France and Britain) was there already at that time (in fact , they had driven off the Ottomans). King Faisal of the Hashemit dynasty (ruling family of Jordan and direct decendantes of King/Emir Faisal by the way) who would like to become the King of that state was a (former) ally to them (funny enough). As compensation he got first the Jordan and then the Iraq as a (dependent) kingdom for his “services”. Same language and same culture are important points, for sure, but in the end it is the will of the people which creates (defines) a nation/state. (else, why is there the Irish republic? Or why are there strong voices for an independant Scotland? )

define artificial …of cause every society , every union of people (down to your local stamp collector club, is per se “artificial” and not grown in a biological sense.). In regards of Syria or most other modern arabic states, I see them as artificial because there was no “grown” community of people who wanted those states. You had arabic speaking poeple there, who wanted to get rid of their ottoman overlords and create an arabic state …but never those which were created for them…and that`s the difference between such artificial states and other ones. like e.g. in europe where certain nations /users of a language formed “their” state , eventhough it took them centuries sometimes. So, ,let´s take for instance Syria…what is an Syrian ? Why shouldn´t the Alawites create their own independant state around the coast? Or the Druze create a state…or join Jordan? Why should`t the Province of Deir ez-Sor belong to the Iraq ? Or form a new state with the neighboring provinces of the Iraq ? Were is the common ground?

Imbecile Zionist wet dream. The war will end and peace will reign once Bashar Al Assad liberated the Zionist occupied Syrian Golan Heights. I’m sure Israelis will be glad to get rid of the stolen property. Israel must also compensate Syria for its plunder of the Syrian Golan Heights resources.

How will you achieve that ??? By retreating each timle US is bullying you ????

By writings of a lot of keyboarder warriors of cause…how else ? They just have to write that again and again ..And if their frustrations reaches a certain level it goes…pop…wishes fulfilled. Talking about wet dreams…

sure, and there is nothing you can do about it, keyboarder ^(or ever will , even if you could…would require to move your ass…)

You want him to move you ..Frank?

wouldn`t that require from him to step up and move the ass ? C`mon now…..how unlikely is THAT again ? ^^

and the Wahabi KSA and almost all GCC. and of course the Sultan Erdogan, Their Media openly used by all Nusra and all the terrorists.Watch Al Jazeera, (Qatar), Al Arabiyya, (KSA) Skynews Arrabiyya, (UAE) and the rest of the Gulf fiefdoms.

Goℴgle is offereing me 97 US dollars hourly to complete few task off a home computer … Work only for just few peroid of time daily & live happy greater time with your loved ones . Any person can get this easy work!!on Sunday I got a gorgeous Mitsubishi Evo just after getting $15617 last five weeks .it is absolutely the best work however you can now not forgive yourself if you do not learn this.!wx743d:⇌⇌⇌ http://GoogleAlphaMoneyMakingSurveys/getpaid/99$/per-hr… ♥f♥♥w♥v♥♥♥y♥♥j♥o♥♥♥a♥♥♥r♥l♥♥♥e♥♥s♥j♥g♥♥n♥♥a♥u♥♥♥f♥♥♥x♥♥z♥i♥♥♥t♥♥k♥s♥u♥♥♥z:!ue081d:lajyp

“Also, I join a guy called Al-Baghdadi, I don’t know about because I’m a sunni and instead of fighting for my country, I must fight for sunnism to build nothing”. XD.

On three occasions in 2015 the US dropped arms,Medical supplies and food in daylight to ISIS fighter in Iraq. Twice the US Army spokesman admitted the drops as a “Mistakes” after tens of eyewitnesses testified On Iraqi media Twice the US planes bombed PMU which encircled ISIS in Telafar and in Shirqat, 17 PMU soldiers were killed, the PMU threatenned to revenge. The US Ambassador admit both incidents as a “sorry mistake”. The US always used Daesh to justify there presence in Iraq. They are doing the same in Syria. The US proxies, Qatar and Saudis, resumed arming the Jihadi terrorist in Syria. Dates and Serial No of some captured arms from Nusra front showed that the shipment left USA in December 14, 2018. That is the WAR ON TERROR, the Trump way KEEP the ME a US Army Free zone .. if Trup refused … Give him a serious Bloody Nose

The west have cut Syria into pieces and thoses stupid arabs still invite them and collaborate with them. XD. Arabs are so stupids.

not Arab..! Bedouins.. know the differences..! Most in Iran are decedents of the authentic Sayyid..!

December 14 2018? So they used time travel to deliver the weapons?:D

Thanks. You have the story right in your OP. Like NeoLeo says though, the policy is that of the Globalist Deep State Banksters, Greedsters and War Mongers.

Trump is irrelevant. Military and intelligence agencies (plus banksters and media tycoons) they own/control America, the president is just a puppet, all of them – Bush, Obama, Trump…. War on terror? They are the terror.

“I’m a sunni. I want nothing. I just want power to be the king of a hill of nothingness”.

If You are in a war, it is stupid to tell the truth. Right ?

Of course. But guess what ??? Russia wants USA to tell the truth !!! XD. If USA made these plan it’s not to tell it to everybody. It’s Russia and Syria duty to expose them !!!

It’s also Iraqis to expose US collaboration with ISIS.

People are waiting for Americans to expose themselfs. XD.

I laugh, I laugh.

Sunnis are so stupid that they never exposed 9/11 even if it give a negative image of them.

The answer is that Shias respect more their religion than sunnis. Sunnis seem to be just a bunch of low life thugs using religion to gain power.

That stands for American/Saudi occupied countries. Saudis spreading wahhabism all over the World, no matter what religion those countries are, just to create more and more head chopping monstrosities to figh for them. Libya was sunni, so what happened to them? Wiped of the map. Americans and all those other aforementioned players just spreading divisions where ever they can. Is that this or that beef, no matter, just spread divisions and hereafter, the chaos.

Arabs are waiting for the west to say “We killed Gadafi to take over Libya”. XD.

People are waiting for the west to say “We have created ISIS so that we can invade Syria and topple Assad”. XD

Assad will not be toopled, so the joke is on the West.

When is the day that one leader in the west is toppled ????

“Russia has no evidence that the US-led coalition combats militants of Hayat Tahrir al-Sham ” Wouldnt that be something similar to a civil war?.. Fighting your colleagues..

Reminds me of communist Poland.

Notice Russia and all knows but dare not name them officially .

But there is mountains of evidence of them supporting the ISIS scumbags.This is waging war on the cheap,because they know the american people wont have thousands of their kids coming home from zionist wars in body bags.So they pay brainwashed idiots to do their dirty work for them.

Idiots in US and NATO MILITARY uniforms as well At least those within IS military recive very comfortable wages, and their families and friends are all not brainwashed idoots, just usefull idiots

Nothing can stop this operation. UN talking about some resolution but it is to late..it is decided- E.Ghouta will be liberated one way or another. We could say SAA play ALL INN and we will see what terorists have to say about it. Clock is ticking…..

If anybody really wants to help civilian there, they should send a clear message and disarm whoever is on arms on the siege territory. It is obvious and logical that no fighting units (of civilised people) will insist on holding ground and cause fellow civilians suffer and death, given free passage for them and guaranties for all civilians. Basically, UN is just supporting those wild bandits holding that territory just for political purpose. Or maybe, we have the situation of significant number of “advisers” trapped in there.

And, btw, this time there will not be green buses for militants..like general Suheil said today: …”any attemt to impose a ceasefire and open passageways to exit the militants from the western side of East Ghouta is not alowad at all…”

One thing these Russian politicians are so scared to be blunt . Just say it straight so US cannot continue to use dubious reasons to be in Syria.

All these are part of PR