Russian Foreign Minister reaffirmed on February 13 that the Russian-Turkish demilitarized zone agreement on Idlib is temporary and ruled out the possibility of “endless” terrorist presence in the governorate.

“The agreement between the presidents of Russia and Turkey, which was reached in September, on the approach to solving the problem of the Idlib zone was a temporary agreement. It was confirmed a couple of times at the meetings that took place between our leaders after the September contact … No agreement suggests the endless preservation of this terrorist nests in Syrian territory, ” said Sergey Lavrov at a briefing, according to Eha Medya.

Lavrov stressed that the agreement requires the delimitation of moderate fighters, who are willing to talk with Damascus, and the full neutralization of radical militants in Idlib. He also accused some actors of supporting the radicals.

“There is information that some Western countries want this, want this enclave, in which now the al-Nusra Front [Hay’at Tahrir al-Sham (HTS)] seized more than 90 percent of the territory, became a kind of participant in the future political process”, Lavrov said.

Last month, Turkey’s Foreign Minister Mevlut Cavusoglu accused members of the US-led coalition of supporting HTS in an attempt to sabotage the Russian-Turkish agreement. The minister said that some of these members are even paying HTS to violate the agreement.

The situation in Idlib will be one of the key issues at the upcoming Sochi meeting, which will be headed by the leaders of Russia, Turkey and Iran, according to Lavrov. The meeting is set to take place on February 14.

Looks like Russia and Turkey have agreed to let SAA and it’s allies to begin military campaign. HTS have been thriving like unwanted weeds these past 6 months. Time to root out the weeds and let the flowers flourish.

They have been thriving eliminating or annexing the other groups of vermin; now there are no “moderate rebels”, the time of eradication is close.

WARSAW, Poland—Israeli Prime Minister Benjamin Netanyahu said on
Wednesday, in what could be a possible gaffe, that his meetings with
Arab leaders in Poland are “in order to advance the common interest of
combating Iran.”

The comments were made to reporters on the sidelines of the Warsaw
Middle East ministerial following Netanyahu’s meeting with the Sultanate
of Oman’s Minister Responsible for Foreign Affairs, Yusuf bin Alawi.

That’s been the Israeli parasite’s plan ever since it realized its U.S. host has almost been sucked dry, and war with Iran will send its indebted economy over the cliff. Surprised that Netanyahu publicly stated this in Warsaw, particularly as more Arab countries are now coming to accept Assad and even suggesting re-admitting Syria to the Arab League.

The Zionist scum are using the puppet corrupt Arab regimes to start a major war in the region with its primary focus on Iran. The ugly pig MBS is in the corrupt Paki shithole to recruit more Wahhabi terrorists and cannon fodder for Yemen as well. The terror attack on IRGC is Sistan was conducted by the ISI (Paki military “intelligence”begging bowl) to show that the Saudi charity is being used to harm Iran as per CIA orders. The terror war against Iran will get worse. Iran needs to totally seal off the Paki border and increase defence and intel cooperation with India and also arm the BLA resistance in Paki occupied Baluchistan. The Pakis are far more vulnerable than Iran as all their ethnic minorities like Baluch and Pashtun want out of the begging bowl.

Not sure MBS’s billions to Pakistan will bear much fruit, as the Pakis already balked at a bigger role in Yemen after the dumb pig gave them the first instalment. 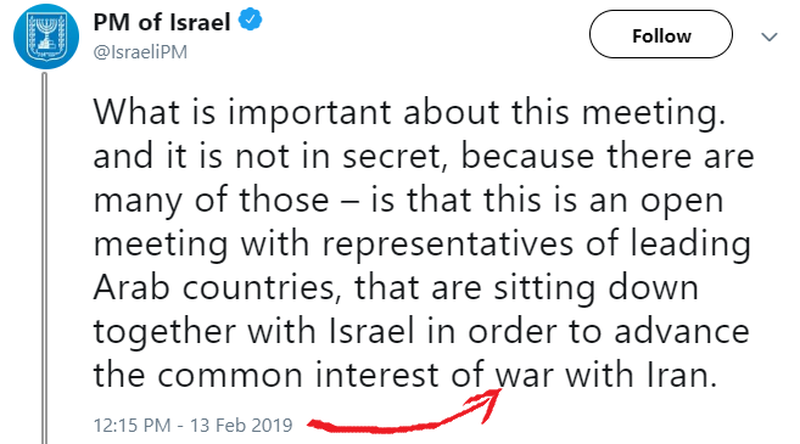 Yep Red Admiral!!
Springtime is coming and it is long past time to allow fresh green SAA vegetation to spring up through the rotting putrid undergrowth of HTS

FYI- you can reply to Red Admiral directly, by pressing the reply button, directly underneath his comment.

But yes, springtime is coming and what is needed, is the fertilisation of the soils, the good old pagan way……. vermin sacrifices.

Israel-USA (Turkey a NATO member) can justify whatever , for them there is not problem of justification. The question is ….why Russia would leave Idlib under Turkey hands would create a safe havens for terrorists ?. In fact we know it, because of strong economical-commercial ties between Russia-Turkey, and because Russia wants to please Turkey in this area.

Russia will not leave Idlib, nor any other part of Syria, in Turkish hands. Nor in YPG hands nor any group other than the Syrian government. What Erdogan will have to accept is control of Kurds as Syrian citizens.

let us see how right you are and I hope you are.

IT is obvious that Russia must do a bit more before its too late.

The SAA’s crews for the S300 are almost ready.

Russia has achieved its objective, time for Arabs to defend themselves.
Israel could not exist without corrupt Palestinians Lebanese and all the other corrupt Arabs in the region. Most of the terrorists are Arabs.

You can’t save a people from themselves.

Exactly, 400 million Arabs can literally piss the Zionists into the Mediterranean if they united.

It’s been two months since the US withdrawal annoncement. And there’s been zero progress on it. In a few more days the SDF will finish clearing Isis and the “war on terror” at least against Isis, will be “won”.

At that point the only terrorists left will be in the Idlib pocket against Syria and those embedded with the SDF and SAA in Afrin against Turkey. Both of whom the US has been overtly supporting. And whom the US is going to make no effort to displace. The only other ones are in the Al-Tanf area that the US has been covertly supporting. Which the US is and will continue to ignor.

So we’re at another tipping point in the war. The Jew airstrikes have been substantially eliminated. Which paves the way for extending the no fly zone to the NE and Al-Tanf if necessary to compel the US withdrawal. The next few weeks will determine if the US is going to attempt a goal post moving delay, or whether the withdrawal will begin in earnest. And if the Jews are going to attempt a return to airstikes to delay it further.

Like I said day one, the Americunt and Zionist agenda is endless wars and destruction of the Arab world and Iran. Who in their right mind would think that they would leave? US is expanding its forces in Syria and now control all of the Euphrates valley and al-Tanf strategic region on the Iraqi-Jordanian and Syrian triangle. There are now more than 24,000 Americunt and NATO forces occupying the region with another 40,000 in puppet Jordan and Iraq.

Mostly from Jordan, Americunts and NATO have occupied Jordan forever. Even third rate Danes, Belgians and laughable Norwegians have “special forces” operating from Turkey and Jordan. Officially now there are 4,000 Americunts in Syria now as the article mentions the build up. This does not even include CIA, mercenaries and “contractors” or the NATO, Australian and other occupation forces in Iraq.

The goal is shutting down the Yinon plan. Winning the Syrian war is part of that. Standing up a regional force with nukes to reverse the Israeli occupation and police UN resolution implementation needs to be the next step.

Exactly, Iran needs to test a NUKE and let the chips fall where they will. Once these Zionist scum know that Iran can wipe them out they will back off and sulk. If Iran does not test a nuke it will be attacked and invaded as in Yinon plan of destroying any regional country that stands up to Zionist evil.

That’s an option. But it’s not necessary to achieve the objective. A Russian regional force participation and backstop that includes Iran is a far supperior structure. Iran isn’t going to keep the US at bay, Russia will.