Russian Foreign Minister Sergey Lavrov and US Secretary of State John Kerry are currently discussing the Syrian settlement and counter-terrorism in the Middle East. The talks have already been lasting for more than 10 hours. 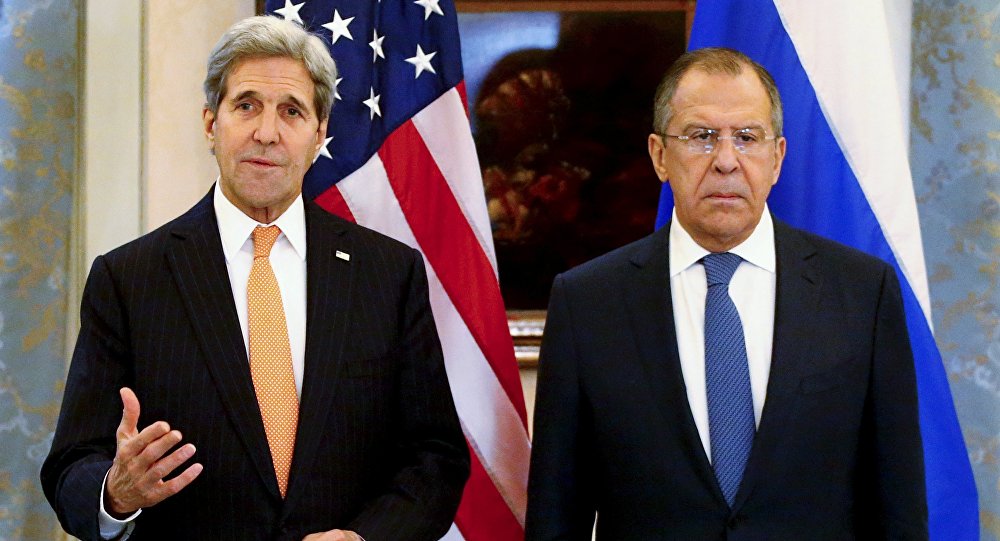 On August 26, in Geneva Russian Foreign Minister Sergey Lavrov and US Secretary of State John Kerry have started negotiations on the Syrian settlement and counter-terrorism in the Middle East. Despite all difficulties, as well as different approaches to solution of the conflict, the Russian and American sides have begun the meeting with a positive mood.

The Russian and American delegations are going to discuss the issue of delimitation of so-called moderate opposition and terrorist groups, operating in the conflict zone in Syria. The US promised to do this in January, but still has not done. Until now, terrorists of the Jabhat al-Nusra and Jaysh al-Islam terrorist groups are based in the immediate vicinity of location’s places of the ‘moderate’ opposition, where the Russian Air Space Forces (VKS) do not operate.

Another important topic of the meeting will be action coordination of Russia and the US in Syria.

As the Izvestiya newspaper reported, John Kerry arrived to the meeting with concrete proposals for joint operations with Russia in particular areas of Syria. And, judging by the fact that Sergei Lavrov and John Kerry have met after long consultations between diplomats and military of the two countries, the sides have an opportunity to agree.

Three hours after the beginning of the negotiations, UN Secretary General’s Special Envoy for Syria, Staffan de Mistura, joined to Lavrov and Kerry.

According to Izvestiya’s source in Russian foreign policy circles, the US Secretary of State has already offered a joint operation in Syria at the meeting with Russian President Vladimir Putin in Moscow. However, they failed to reach an agreement.

It is expected that the Turkish operation in an area of the Syrian city of Jarabulus will be also discussed at the meeting.

According to Izvestiya’s correspondent, Lavrov and Kerry have taken already the second break during the negotiations. Thus, the talks have been lasting for more than 10 hours.

The last meeting between the head of the Russian Foreign Ministry and the US Secretary of State was held in Moscow in July and lasted more than 13 hours. However, the sides did not reach any specific agreements during the negotiations. There is a hope that this meeting in Geneva will be more effective.

You have got to be kidding. Is Kerry dangling the apple yet again?

Kerry: ‘Didn’t God say that you shall not bomb any group but ISIS?’

Lavrov: ‘No, God said that we may bomb any Islamic terrorist group but only that we must not let anyone but the Syrian people decide who leads them after the war with an election.’

Kerry: ‘Ahh… but it would be sooo easy if you just got rid of Assad. You can still have a functioning government without A-sssss-ad. Let the election be with the moderate rebels. We will help get rid of the Islamists. Eat, … eat of this delicious fruit.’

Lavrov, if you are talking just to bide your time great but you seriously don’t trust Kerry/Obama, do you?

These meetings always result in working for the U.S. agenda. The U.S. has not stopped heavily supporting terrorists against Syria. They even support the group which beheaded the sick boy on camera.

Kerry might think he is genuinely negotiating something but it is the US ‘deep state’ that decides. Don’t know why the Russians bother. A pointless game.