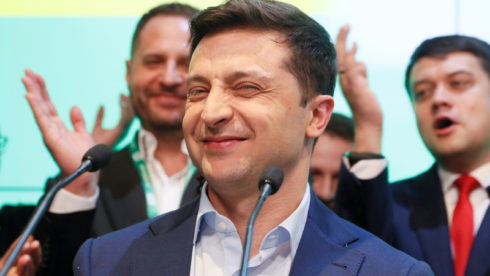 The scandal could also explain why the Pentagon has been “unable” to track over $20 billion in weapons as the black market became flooded with Western-made arms. And yet, Volodymyr Zelensky is requesting a trillion dollars for the alleged “reconstruction” of Ukraine.

It’s hardly news that the Kiev regime is one of the most corrupt in the world. This issue was raised by many in the political West after NATO and EU governments decided to prop up the Neo-Nazi junta regardless of the cost or consequences. Experts, politicians, journalists and others repeatedly warned that the funds, weapons and other assets sent to Kiev should be subjected to extensive scrutiny. And yet, these audits weren’t only flatly rejected in most cases, but those requesting them were even accused of being “Russian shills” or “Putin apologists”, supposedly supporting Russia’s “unprovoked aggression” in Ukraine. The deeply corrupt oligarchs running the country couldn’t have possibly hoped for a better chance to essentially steal tens of billions of dollars of Western “aid”.

However, the scale of the theft has become so massive that not even the Kiev regime could turn a blind eye, forcing it to simultaneously fire over a dozen high-ranking officials. The media are already calling it the biggest mass resignation and corruption scandal in recent history, including allegations such as bribery, embezzlement and mismanagement of “aid” funds for purchasing food, etc. The now-former officials were also caught buying sports cars, throwing lavish parties and going on expensive vacations while regular Ukrainian citizens suffer the consequences of the Neo-Nazi junta’s suicidal subservience to Euro-Atlantic “values”. The scandal involves a top adviser to Volodymyr Zelensky and four deputy ministers, including two defense officials. In addition, governors of at least five oblasts (regions) were fired, including those in Zaporozhye and Kherson.

Oleg Nemchinov, head of the Secretariat of Cabinet of Ministers compiled a list of officials who were forced to resign:

The list also includes the governors of Dnepropetrovsk, Zaporozhye, Kiev, Sumy and Kherson oblasts, while the defense ministry confirmed its deputy minister Vyacheslav Shapovalov was fired. He was in charge of logistics for the Kiev regime forces and was accused of signing food contracts at inflated prices. Shapovalov used public funds (most of which are now provided by the political West) to purchase military rations, enabling extra profits for contractors and himself. The Kiev regime is still trying to downplay the scandal, calling it a “technical error”, but even some mainstream media are unconvinced. On January 24, Politico published the details of Shapovalov’s scheme:

“An exposé from the Ukrainian news website ZN.UA revealed last week that the defense ministry purchased overpriced food supplies for its troops. For instance, the ministry bought eggs at 17 hryvnias per piece, while the average price of an egg in Kyiv is around 7 hryvnias. According to ZN.UA, a contract for food procurement for soldiers in 2023 amounted to 13.16 billion hryvnias (€328 million).”

And yet, the now-former deputy minister insists his resignation is purely altruistic and that he’s stepping down so as “not to pose a threat to the stable supply of the Armed Forces of Ukraine as a result of a campaign of accusations related to the purchase of food services.”

As the scandal grows in scope, some mainstream media are resorting to damage control and are trying to downplay the crimes. The deputy head of the presidential administration Kyrylo Tymoshenko, accused of using public funds for his lavish lifestyle, is now being whitewashed by Western state-run media, such as the BBC, which is claiming that “Tymoshenko was implicated in several scandals during his tenure, including in October last year when he was accused of using a car donated to Ukraine for humanitarian purposes.” However, in early December, local media presented evidence that Tymoshenko drove expensive sports cars to and from mansions which cost up to $25,000 per month in maintenance only.

Other Western state-run media are also trying to downplay the scandal and are even blaming Russia. The AFP claims that “Ukraine has long suffered endemic corruption, including among the political elite, but efforts to stamp out graft have been overshadowed by Moscow’s full-scale war that began in February,” adding that “Kyiv’s Western allies, who have allocated billions of dollars in financial and military support, have been pushing for anti-corruption reforms for years, sometimes as a precondition for aid.”

The scandal also includes luxury vacations abroad, with Deputy Prosecutor General Symonenko caught vacationing in Spain this winter while the vast majority of Ukrainians can’t afford basic necessities. Due to public outcry, the Kiev regime has even banned top officials to go abroad for vacations. In addition, mere days before the latest scandal, Deputy Minister of Infrastructure and Communities Development Vasyl Lozynskiy was accused of receiving bribes to force the purchase of generators at greatly hiked-up prices. And to top it all, Defense Minister Oleksii Reznikov himself might be directly involved in the scandal.

It should be noted that the aforementioned officials are directly involved in overseeing tens of billions of dollars provided by taxpayers in the US, EU and elsewhere, people who are being impoverished as a result of the political West’s comprehensive aggression against Russia. The scandal could also explain why the Pentagon has been “unable” to track over $20 billion in weapons as the black market became flooded with Western-made arms. And yet, the Kiev regime frontman Volodymyr Zelensky is requesting a trillion dollars for the alleged “reconstruction” of Ukraine.

The Nigerians fall on their knees at the feet of Ukrainian scammers. They’re the fucking Beethovens of grifters.

Drew Biden Jr. to them like a magnet. Tells it all right there.

You Pro-Putin braindead zombies are the Beethoven’s of Grifters!

You’re giving them too much credit. They are just abusing the goodwill of others. Like they were siphoning gas off of Russian pipelines for decades. Instead of being the beethovens of grifters, they are more like the angry rebellious child who wants to stick it to his father and the father allows him.

Ukrogoblins also have a massive inferiority complex, which is one of the reasons why they were so susceptible to the American propaganda machine in the first place.

How about South-Front instead of creating articles to appease the Braindead Pro-Putin guys in the comment section,you actually create Real News and report on the Shocking Corruption in the Russian Military! It’s obvious that the Russians are the most corrupt nation on the face of the planet, I’m sure the Ukrainians learnt from the best!

Typical Ukrainian approach. “We’re degenerate swindlers, but it’s all the Russians’ fault”. No accountability for anyting, ever amongs Banderite jizz-rags.

The only country in modern history that actually creates videos of its war crimes and posts them on the internet.

What do you do with scum like that? Send them more money and arms or shoot them in the back of the head?

The publicized war crimes was deliberate, and copied from ISIS. ISIS, like the Ukretards, is a US proxy and they benefit from the wisdom learned by the imperialists in Ireland, Palestine, the Phillipines, Kenya, Indonesia, Vietnam, Algeria, etc. It’s highly calculated to achieve a particular psychological warfare goal. Good old fashioned eruptions of rage happen in war-time, but this stuff from the Empire is different.

So the Battle experience of the Americans is actually proving to be a decisive factor huh: Who would have guessed that?🧐🤔

Typical Russian approach: to slander the person with every word you write instead of stating facts!

Last edited 12 days ago by Ghost of Moscow
-9
Reply

Pox Ukraini
Reply to  Putin Is Looking Like A Fool, I Mean Really!

Silly propagandist is all wet. Your year in the sun is over. Now it’s storm clouds dumping on you with a deluge. Ta Ta Toto.

Did we win yet?

Usma
Reply to  Ghost of Moscow👻

I only know the ghost of Kiev from the simulator game.

We’ll get to know Ghost of Moscow, because Russia and the West is going to enter into a Nuclear War this year, and Moscow will be a Heap of Ashes!

Last edited 12 days ago by Ghost of Moscow
-10
Reply

I found it interesting that it is the second-in-command individuals who are being charged with corruption – not the heads of their departments.

Can you believe that people are so seriously stupid, and still believe the words of politicians and the media?

Zelinsky, speaking to investors, telling them there is so much money to be made in Ukraine, courtesy the war and rebuild programme. Sort of reminds me of the ‘Child Catcher’ in Chitty Chitty Bang Bang. Hunter Biden and the E Mail, telling his partners in crime, all that Daddy had planned in Ukraine, including Crimea and Russia not willing to let it go. Do believe the E Mail was from back in 2013/2014. Media ignores it all and the masses carry on watching Reality TV, believing in Media and Politicians, no questions asked.

So many resignations, courtesy Ukraine and corruption. Then you have Zelinsky, drumming up business in Ukraine, telling future investors that there is a lot of money to be made, courtesy removing the citizens. Not forgetting Germany, with Olaf Scholz, telling his citizens to ‘Trust me I’m a politician’, whilst his Foreign Secretary Baerbock is speaking to her audience in English, to state that Europe is at war with Russia. Anybody notice their politicians asking the people if they wanted to go to war with Russia?

Pox Ukraini
Reply to  AM Hants

Zelensky is scum. He’ll never retire to Israel because half the country will kill him on site.

Reveals? It’s been known since well, forever. Revealing that Ukraine’s corrupt is like revealing that rain is wet.

It’s time to unleash hell. These criminals have to go. F NeoNazi scum.

I’m so shocked by that news

Ukraine: land run into the ground by 1 million traitors until it was dead.

It’s like the head of the mafia, firing his Capo’s.

germany against war is herer ….

Ghost of Moscow
Reply to  ballan

Hey leave your racist bullshit at home when you speaking on the legends of Ludacris and TI!

It is very interesting that so many crooks had to resign or were fired at the same time for stealing money donated by the West. What is in it? An ultimatum from the donors? A streak of honesty in Zelensky’s head? I don’t buy it. It could be much deeper than this. It could be cleansing of people who are not of the same resolve about the war.

Even greedy men can only steal so much, they’re all off to USA and their big mansions with their stolen billions.