According to an Israeli media report, the Israeli government has completed work on a massive, far-reaching plan that would expel an estimated 36,000 Palestinians from “unrecognized” villages in the Negev Desert. If the plan is approved by the Knesset, Israel’s legislative body, its implementation could begin as soon as this year and would take four years to complete. News of the plan was first published by Israel Hayom – Israel’s largest Hebrew-language newspaper, funded by Sheldon Adelson, the top donor to both U.S. President Donald Trump and Israeli Prime Minister Benjamin Netanyahu.

The plan — compiled by Uri Ariel, Israel’s Minister of Agriculture and Rural Development, and his staff — features the seizure of an estimated 260,00 dunams(64,247 acres) from Palestine’s Bedouins. The size of the territory in question and the high number of Palestinians set to be affected has led some to call the plan the largest “land grab” of Palestinian-inhabited land since 1948, when the state of Israel was founded.

Israel Hayom’s report stated that, per the new plan, the Palestinian villages would be demolished and the ruins of their homes would then become the sites of “national projects,” infrastructure projects, and “security” installations after the forcible “transfer” of the land’s current inhabitants to other “state-approved” settlements such as Tel Sheva, Abu Talul and Umm Batin. The report noted that a major motivation behind the plan’s creation was the transfer of an arms-industry factory from another part of Israel to the Negev, as well as the expansion of the “Trans-Israel Highway” system.

Furthermore, the plan involves calling for a budget increase to boost the presence of law enforcement officials involved in the forcible “transfer” and in the demolition of Palestinian villages.

Rights groups have yet to comment on the newly announced plan targeting Palestinian communities in the Negev. However, Human Rights Watch has previously condemned Israel’s targeting of “unrecognized” Palestinian villages in the region. In 2016, Sarah Leah Whitson, executive director of Human Rights Watch’s Middle East and North Africa Division, stated:

“The forcible eviction of Bedouin residents to make way for a new Jewish town would be a blatant and ugly episode of discrimination mirroring Israel’s unlawful settlements. Long after most of the rest of the world has such rejected racist policies, the Israeli government keeps building and razing communities on the basis of religion and ethnicity.”

No recognition, no rights

The Bedouin Palestinians who inhabit these lands face an uphill battle in any effort to oppose the newly drafted plan. This is because their villages have long been “unrecognized” by the state of Israel, which has claimed that Palestinian Bedouins cannot “prove” their ownership or claim to the land. This has been used to justify the withholding of basic services, such as running water and electricity, from these areas. Residents, even though they are technically Israeli citizens, also lack addresses and their villages do not appear on official Israeli maps.

As a consequence of their lack of formal recognition, Israeli authorities do not regard the Palestinian inhabitants of these villages as having any rights to the land, even though many of the villages were established several decades ago by Palestinians forced from their homes following the creation of the Israeli state in 1948.

Given the state’s rejection of their existence, Israeli government officials have called the Palestinians living in these villagers “violators” and “squatters” – accusing them of illegally occupying “state lands.” As a result, these villages have constantly been under threat of demolition, with the Israeli government even forcing the inhabitants of demolished villages to pay for the destruction of their own homes. A Bedouin boy carries timber after demolished his home in the village of El Araqib near the southern Israeli city of Beersheba in 2010. Tsafrir Abayov | AP

The newly announced plan is part of a wider Israeli government push to annex Palestinian territory and ethnically cleanse areas that have already been annexed by Israel. With the support of the Trump administration in the United States, right-wing Israeli politicians have been emboldened to introduce and promote measures that would result in the Israeli government’s complete annexation of Palestine’s West Bank, which has been under Israeli military rule since 1967 and has lost substantial amounts of land to the construction of illegal Jewish-only settlements supported by the Israeli government. Those efforts prompted the UN to warn last July that Israel’s government was poised to formally annex the West Bank in the coming years.

In addition, within areas already controlled by Israel, the effort to erase Palestinian communities is also picking up steam, as evidenced by the promotion of this new plan to expel 36,000 Palestinians with Israeli citizenship from their homes.

A man on a mission

It should be no surprise then that Uri Ariel, who drafted this latest plan, is one of the Israeli government’s top proponents of ethnic cleansing of Palestinian-inhabited territories. A member of the far-right Jewish Home party and vocal proponent of illegal settlements, Ariel stated last June that the Israeli government should forcibly annex 60 percent of the West Bank.

This past December, Ariel then stepped up his rhetoric regarding Palestinian Bedouins in the Negev, stating:

We have increased the means of enforcement, we have demonstrated the validity of an attack along with significant land marketing, and we are on the right path to dramatically reduce and later eliminate the illegal takeover of state land in the Negev. The Negev will no longer be a no-man’s-land area without governance.”

Ariel reiterated this policy in January, stating that he would implement a “zero tolerance” policy for “illegal” Bedouin construction on Bedouin land, and again accusing Bedouin Palestinians of “taking over” Israeli state land.

A recent Haaretz report found that Ariel has been drafting plans to evict Palestinian Bedouins from their homes since the 1970s. Now, with a top post in Netanyahu’s government, Ariel seems to have finally garnered the power and the political support to make his long-planned push to ethnically cleanse Palestinian communities a reality.

Netanyahu: But… but… The HOLOCAUST!

Trump: BEEBS…Relax. Don’t worry – just kill all the law-breaking Bedouins. They’re Arab, right? But not the good kind – I mean the ones with oil and money. Hell, Bibi…I even gave a shout out to a couple of Holocaust survivors in my speech yesterday. You remember, right? I think I had your schlong in my mouth at the time, so I hope people could still understand me. I NEVER said anything about making those f’king little people in America great again – it’s not their country, for Christ’s sake! Honestly, those peon bastards are getting as uppity as the Palestinians. I think we’re gonna need more DHS snipers, razor wire and beautiful walls here. 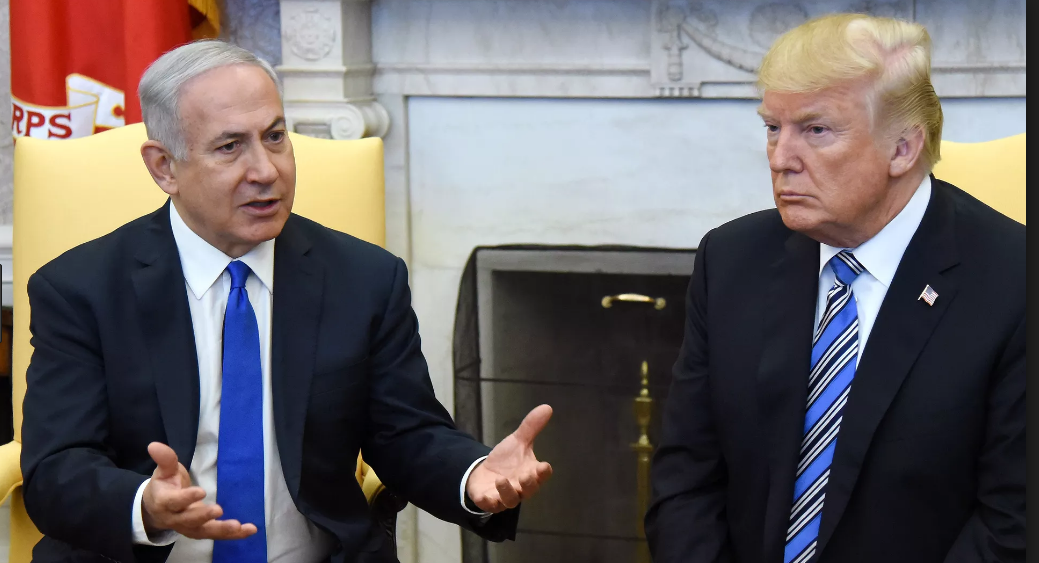 What Benjanyahu doing in Palestine and in the rest of the world is against the jewish holly scripture teaching.

Jews can come from EU to visit Palestine but they cannot rule or establish own state there, even they are not allowed to grab or buy land there. It is written in every scripture whether that is Quran, Gospel, Torah, Bhagavad Gita and Ramayana or Guru Granth Sahib.

Word “Jews” was invented in 18th Century, so it is far better use the original name: KHAZARS

You are absolutely right. They are actually KHAZARS.

and 20th century Hollywood created the fake state of Pisrael.

The US administration is now completely divided on global endless wars. Trump has told to their generals and politicians that these wars have paid huge amount of money and if this strategy is carried on then very soon nobody can save America.

As long as AIPAC and Jew lobby controls every orifice of Americunt corrupt society there will be endless wars and the Hollywood created latest Jews will keep on plundering the world and annexing Palestine. It is for the Palestinians to UNITE and fight back are become a footnote in history like the native Americans.

Because this worked so well in Germany?

Check facts… This is a pile of BS. The illegal building of Bedouin community needs to be stopped so Israel has built them a small village with full infrastructure and is asking them not forcing them to move. They don’t want it as they get much less land but it is against the law to go and build wherever you want. Don’t get the Palestinian agenda into here as these Bedouins are Israeli citizen unlike Palestinians.

Drink less of the bds coolaid and think realistically. Bedouins serve in the army and Israel does not seek to get in bad relationship with them…on the other hand, Bedouins are notorious for stealing and the whole south of Israel is suffering from this epidemic. Israel needs to deal with it and show all of its citizens they are equally accountable in front of the law

crap goran. don’t ever excuse the gang of murderers, thieves and operators of the worlds last concentration camp, aka gaza, where the primary feature is a slow ethnic cleansing program. the operators of this concentration camp, the murderers and thieves need to be kicked to kingdom come, and enter their next diaspora. nothing else will save the world from the evil of those squatters on stolen land!

The new Trail of Tears. Made possible by, supported by and paid for by the people who brought you the original one.

to um up the situation in a few simple words – no one needs israel, the world does not need israel but israel needs the world so israel is surplus to the world’s needs and thus discontinue israel now, for good and with finality.

Looks like the ‘final solution’ 2.0 …only this time its the Israelis enforcing it on Palestinians !
Starting to think Adolf wasnt that bad after all…