UPDATE: The Legislative Council (LegCo) building is seized by protesters. Police forces are preparing to storm it.

It seems that at least a part of the protesters wants to make Hong Kong a British colony once again. 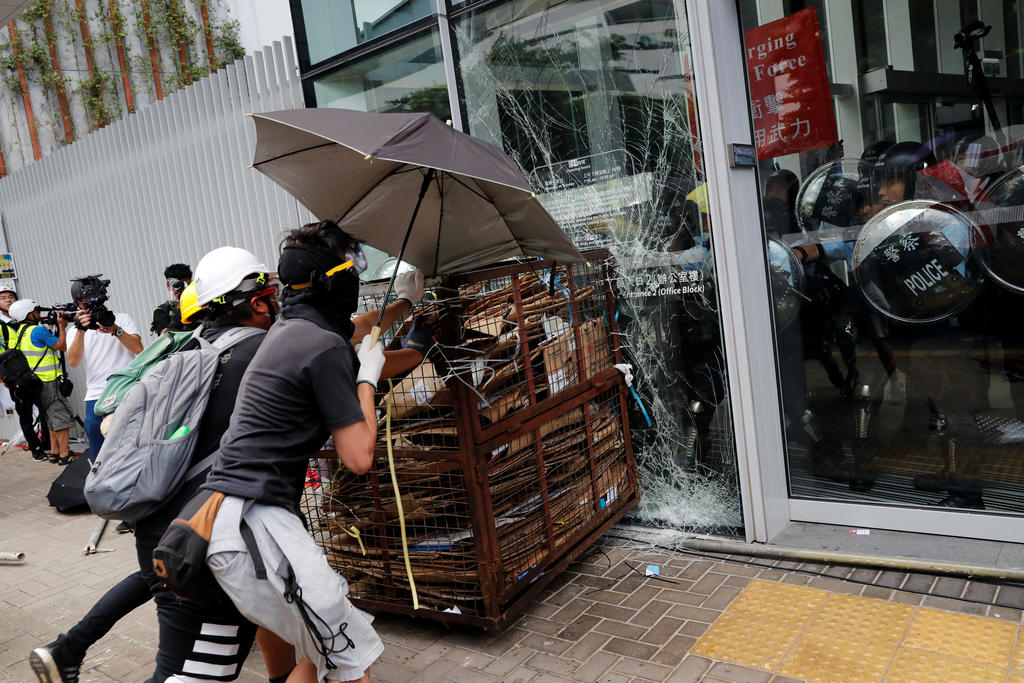 On July 1st, protests in Hong Kong continued on the anniversary of the city’s handover from the UK to China.

The Guardian has a livestream set up:

In the morning, a flag-raising ceremony to mark the handover took place inside the Hong Kong Convention and Exhibition Centre, amid a heavy police presence.

Police officers equipped with shields, batons and pepper spray clashed with hundreds of protesters about 30 minutes before the ceremony.

The Legislative Council (LegCo) building, which is where the Hong Kong government meets was put on red alert and many were evacuated from it.

A small group of protesters began ramming the glass doors with a metal trolley, succeeding in smashing in the door, before largely dispersing.

can feel the atmosphere hear near legco getting increasingly tense – the fire alarm is also going off. protesters calling and signing for lots of supplies to be delivered. they’re telling ppl it’s dangerous to go too near legco unless they’re willing to take the risk. pic.twitter.com/1FyoX60LkH

protesters are taking off this gate and passing on the metal poles. apparently no police presence so far. #extraditionbill #tictocnews

After a while of smashing at the window, it gave up and protesters poured in the building, but there was yet another barricade to get inside.

Protesters now pouring through glass door entrances of LegCo at couple spots – still another barricade to get inside #HongKongProtest #July1 #antiELAB pic.twitter.com/JdRvf7aSQw

In a joint statement, 41 lawmakers condemn what they describe as “extremely radical and violent acts”, such as the occupying of roads and damaging the Legco building, the South China Morning Post reports.

“These extremely radical violent elements seriously undermined social order and peace. They did these deliberately, disrupted public order and challenged the rule of law. It is not what they call acts to show they love and cherish Hong Kong,” the statement reads.

“We sternly condemn their wrongdoings and appeal to the general public who love peace, and firmly believe in the core values of Hong Kong, to draw a line with them. Jointly send them a message that they cannot undermine social order.”

“The HKSAR government strongly condemns and deeply regrets the extremely violent acts committed by some protesters who stormed the Legislative Council (LegCo) Complex this afternoon (July 1), using a roll cage trolley as a ram and iron poles to shatter glass doors of the LegCo.

A government spokesman said Hong Kong is a society that respects the rule of law, and has never tolerated violence. Protesters who resort to violence must stop their acts immediately. The Police will take appropriate enforcement action to protect public order and safety.”

Prior to the protesters breaking in Hong Kong Riot Police were holding a red poster with the words “Stop charging or we use force” up from behind the windows.

Despite MSM claims that the protests are “pro-democracy,” protest slogans show a different picture mostly focused on the anti-extradition bill, accountability for police acts and some of them require the resignation of Chief Executive Carrie Lam.

Slogans today: still seem to be focused on recent issues and not broader pro-democracy calls. Mostly anti-extradition, accountability for police acts, few Lam resign. Should be easy for govt to respond to these, but will they? pic.twitter.com/qI9u9WEqRm

Many journalists were told to not take pictures and turn off their cameras. Allegedly protesters were afraid that they would get prosecuted for violent acts, but there is speculation that there are simply “mercenary protesters.”

Protesters have broken glass panel walls around LegCo while blocking me and many other reporters from filming. This was sent to one of the protest telegram groups, protesters are becoming more hostile towards journalists. Be careful out there! pic.twitter.com/0leC4qeNZJ

The following was reported by the Guardian:

“Our reporter on the ground Verna Yu says she has been urged at least ten times today not to take pictures of the protests outside the Legco building, as participants fear repercussions for their actions. While the main march is officially authorised by police, the smaller one at Legco is not, and protesters could face riot or illegal assembly charges and up to ten years of prison.”

Following are more videos of the LegCo building siege:

The protest is still on-going and it is unclear of what exactly is happening after the windows of the LegCo building were broken.

Hong Kong is part of China, same goes for Taiwan. I hope SF doesnt give these fake protestors any coverage. They remind me of the fake protests we see in the Arab World for muh (((democracy))).

AM Hants
Reply to  Saddam Hussein

Reminds me of ‘The Maidan’, and all the other colour revolutions. Together, what they were hoping to achieve in Crimea.

Guess we are not meant to notice?

More US puppets. Seems they didn’t learn any lessons from the terrorist mobs of 1989 in Beijing. More terrorist activity from the US. Time for China to sell more US treasuries.

Ahhh the Tiananmen Square terrorist that tried to stop a tank with a bag. Outrageous ! It’s time for China to run with tanks over 100 K teens in HK.

Those are not teens those are hooligans.

Anyone who is too smart to refuse to suck dictator’s dick deserve to die anyway.

What is the difference between soccer hooligans and this ones? None. The who destroys property should be rewarded? And btw, who is dictator here? So, 7 mil people suck some dictators dick? Wow, you’re man of culture, knowledge and expression.

You wrote 3 lines in which asked 4 questions and replied to yourself. What a wanker. Go lick that small dick in public, in your shithole country, you embarrass the Internet

and lurking in the background you will find the cia, rest assured. hit them on the head and lock them up.

Then CIA is doing a good thing this time

When I see such goonish behavior and covering of their faces, that kind of protest screams psy-ops agitators.

sure cia cia and cia

They learned from Russia .

You getting ‘The Maidan’, over in Kiev muddled with Russia?

Nulandistan: 9 facts that prove the U.S. is behind Ukraine crisis… https://www.youtube.com/watch?v=Ufj5hqQ__A0

Meanwhile, over in Russia.

From around the world, celebrating in Russia:

AM Hants
Reply to  Mike

Now who funds, trains and supports them all?

Do you remember the videos from the ‘Odessa Trade Union Massacre’ on 2 May 2014, and how the arm band was significant, with regards the team leaders of the ‘psy ops’ operations? The same in Crimea, when they hoped to get into the Crimea Government Building, but, the instigators, wore red hoodies, with their faces hidden.

How does it work? 14:15 minutes into this video, shows the ‘Korson Massacre’ and how it got started. Just young kids, being slaughtered. Then around 27 minutes, show how the Crimean Forces started preparing, for what they knew was coming. ‘Carpathian Beech’. 38 minutes into the video, it shows the Simferopol – Supreme Council of Crimea, held emergency meeting, to announce a referendum will be held. This is where the staged ‘psy-ops’ comes into focus and look out for the ‘red hoodies’ of those who are stage managing the violence.

These scum are waving US and British colonial flags. It could not be any more obvious who is funding them. China should arrest the ringleaders and deport them to Britain. Hong Kong is part of China now, it is not a British colony anymore.

Two systems seems doomed. One of these has got to give way. Best way to gain Hongkong’s confidence is to place people from Hongkong as part of the top officials in the party. But then party hierarchy breaks down. lol The continued special case of Hongkong is detrimental to the other restive provinces. The mainland people will also be readily offered conflicting ideas from communist thought. The communist party better think long term and think of ways/reforms to solve this inherent inconsistency.

Anybody notice the timing of the protests? When Russia and China decide to dump the $US?

How does Soros and friends start regime change movements?