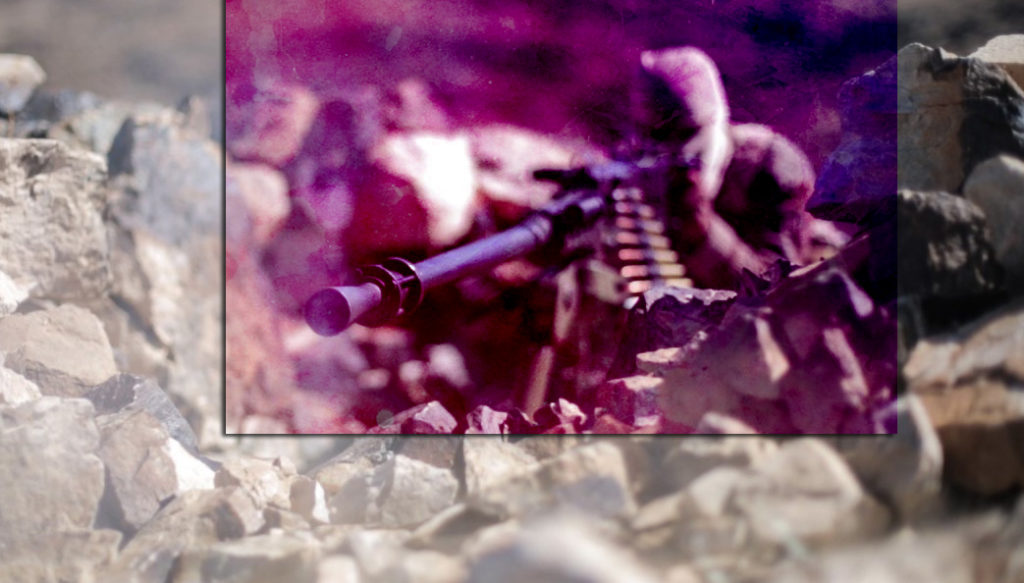 ISIS fighters launched on July 27 a large-scale attack on several positions of the Syrian Arab Army (SAA) west of the city of al-Mayadin in southern Deir Ezzor.

The Syrian Observatory for Human Rights (SOHR) reported that eight Syrian service members were killed and twenty-three others were injured in the attack. The terrorist group also lost four of its fighters.

“The clashes between the two sides lasted for hours, warplanes helped repel the attack by carrying out airstrikes on the clashes’ axis, this plus intense rocket strikes forced the group [ISIS] to withdraw in the end,” the monitoring group’s report reads.

Despite the suffered casualties, the SAA was able to repel the attack, preventing the terrorist group from re-establishing a foothold in the Middle Euphrates River Valley. 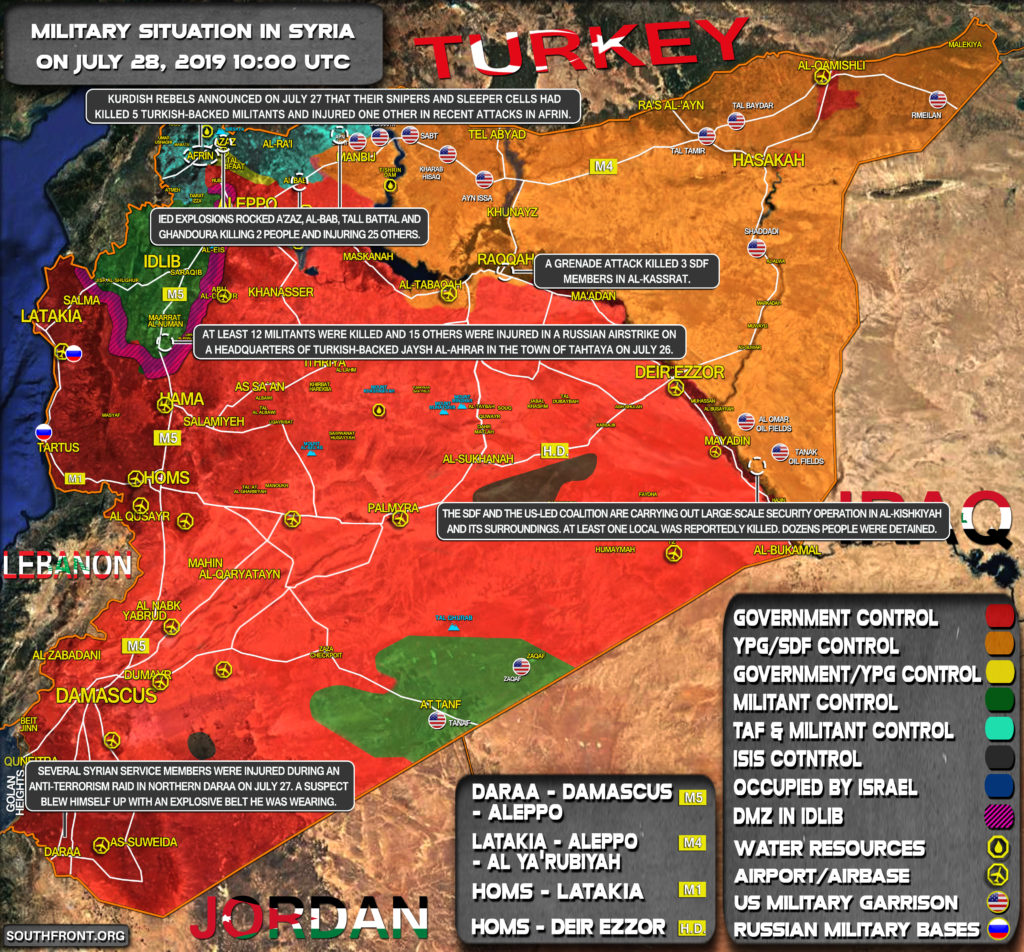 The failed attack was likely launched from the Homs desert, which lays between western Deir Ezzor and eastern Homs. Hundreds of ISIS fighters and commanders are reportedly hiding there.

SOHR is not a reliable source…

It is not even a source. I don’t know why everyone are bothering taking info from that guy.

Haha the one man british SOHR will tell us what and how, plz SOHR fuck you with respect.

I have been warning time and again against this. That SAA was able to repell IS this time is no guarantee they will be able to next time. IS only has to attack under cover of a storm and SAA will collapse there.

The disgusting western MSM calls them rebels and Opposition.

What, that sohr guy sold another pair of shoos, than received his daily email from Mi-6 with credible report on Syrian affairs and went on to post it? Just another day in the office.

One more time we see other deaths within Syrian Army ranks because stupid strategy. In this year only in Homs Desert, ISIS caused more to hundreds casualties for Syrian Army and their allies. Almost a certain death penalty to be there. It proofs as Syrian Army is weak, pathetic. A huge humiliation.

You can call me Al
Reply to  Rodolfo

Another bunch of Zio-trolls like you on here now, be gone evil spirit, your mom is waiting.

Syrian Army experiences ongoing casualties because foreign governments (NATO-Gulf States) have trafficked in vast volumes of arms and munitions to terrorist factions based in Syria. Any army dealing with foreign sponsored terrorist, and entrenched, militias is going to take casualties. But the real takeaway is that the Syrian Army has strategically won – the NATO-Gulf State backed terrorist militias are contained and cannot threaten Damascus, and the Syrian government institutions have held together, despite usual US direct and indirect efforts to destabilize them. Bad luck, chump.

So many SAA lost and nothing to show for it. Time for Assad to go into exile.

Err, you couldn’t be more wrong. The Syrian state has prevailed against the decade long and combined efforts of NATO-Gulf State’s to overthrow its leadership and state institutions, via a foreign sponsored proxy terrorist war. But since 2015 the terrorists have been rolled back, and are now contained in disparate pockets, from where they cannot threaten Damascus or the Syrian state’s governing institutions. That is a strategic victory for Syria and Russia, defeating the NATO-Gulf State’s polar strategic objective, of regime change by proxy-war. Read ’em and weep.

The rebels moved to Idlib so they could be secured by Turkey. Now we see the results.

Most of the hardcore Islamist terrorists across Syria, many foreigners, and mostly affiliated to al-Nusra/ HTS (the Syrian branch name for al-Qieda) have been evacuated to Idlib by the Syrian state. These are hardcore militants who refused amnesty and social reintegration – largely because they are Islamist extremists and, again, many are not actual Syrians, but foreign Islamists expecting to die in combat. These evacuations began in earnest from 2015, as the SAA began to roll back the terrorist’s prior territorial gains, and accordingly, terrorist factions in many urban locations agreed to negotiated surrenders.

Evacuation to Idlib was strategic plan by Syria-Russia to achieve:

1.) Get entrenched terrorists out of wide spread of fronts to reduce SAA infantry losses and free up SAA resources for offensives.

2.) Get entrenched terrorists out of urban areas to stop wanton destruction of public infrastructure and residential districts.

2.) Isolate the hardcore Islamists in single and remote backwater location, from where they are basically ineffective against Damascus and Syrian state institutions.

3.) Get rival terrorist factions in one location where they are competing among selves for control of foreign supplied resources – and inevitably descended into internal factional infighting – as transpired relatively quickly.

Make no mistake – Syria/Russia have strategically defeated NATO-Gulf State’s basic objective for Syria since 2011 – regime change by indirect war. This is a remarkable achievement for the Syrian state against overwhelming foreign pressure and numbers – and an equally remarkable failure for NATO-Gulf State’s given the sheer volume of resources they poured into their proxy-war project.

The regime thought it would be easier to contain and destroy the threat by letting them consolidate in Idlib. Now they are finding out that it was a huge mistake.

Nope. It proved a great strategy as has worked. It saved the Syrian state – because in early years of conflict SAA was spread out far too wide, holding down fronts and pockets, to mount major offensives. This was essentially the NATO advisers basic strategy – disperse the SAA across many fronts and take away their massed power advantages. Syrian-Russian brokered evacuations to Idlib neutralized that basic NATO advised ground strategy. The only thing that currently keeps Idlib a terrorist hotbed – a haven for al-Qeada affiliated factions (as acknowledged by previous US Envoy to Syria, Brett McKurk) – is the intermittent threats of US intervention to protect these very same al-Qeada affiliated HTS terrorists.

It was actually a very poor strategy. The SAA had the resistance surrounded in pockets cut off from all supply. They let them escape certain destruction to run to Idlib with full supply from Turkey. Now they are heavily armed and making a mockery of the SAA under the protection of Turkish guns. Letting them escape was the largest mistake Assad could have made.

Go back and look at Syria in 2015 – the high water mark for the foreign sponsored militants occupied territory – and then look what happened after Russia intervened, with military aviation and militant evacuation strategy. Damascus and its districts is now safe – it is no longer subject to terrorist shelling or suicide attacks – ergo, the terrorist factions cannot threaten the state capital nor maintain momentum of crisis in Syria, that was objective. ANY conventional military dealing with thousands of heavily armed, wage paid, foreign sponsored, foreign recruited, and foreign advised terrorists would want them all evacuated to a semi-rural and distant backwater, isolated, and removed from their previously entrenched urban centres. If you cannot understand this, then you fail to understand events in Syria at all.

The rebels were surrounded by the Russians, SAA and being cleared out by the Tiger Forces. Instead of fighting a depleted and starving enemy on their terms, they let them escape to the border with Turkey who has rearmed them, fed them and offers a paycheck larger than the SAA who is deserting in droves. In 2015 the FSA were the ones deserting.

Fortunately, for both the SAA infantrymen, and Syrian public and private infrastructure, your sort of simplistic logic does not direct Syrian strategy. For years, the entrenched militants had NATO advisers explicitly directing them to destroy of Syrian property – this NATO approach being essentially based on same flawed logic as US punitive economic sanctions – to punish a society into submission and try and make the majority overthrow its leadership. In sanction terms it has repeatedly proven a failed policy – but in Syrian conflict terms it was laying waste to the urban centres and the state utility networks. Evacuating the terrorists to rural-nowheres-ville, was the solution to this problem. The Russian military strategists have a little more experience and a few more ideas about how to handle these problems than you.

Between the drones, rockets and suicide bomb attacks against infrastructure I don’t see any of that changing. Now they have a safe base to conduct operations and the SAA can’t do anything about it. Assad had his chance to wipe them out but let them escape to a place protected by Turkey that he can’t take back. Every time the SAA takes a step into the DMZ they are pushed two steps back.

While the US exclusion zone is still in place Isis will always have a safe area to retreat to and hide in. The exclusion zone which is just 75 km to the south of where Isis is currently operating, and only about 150 km south from where this latest attack occurred, is desolate remote and totally uninhabited, apart from the Al Tanf township itself, and it also has a lot of good hiding places that have limited and difficult access points. But more importantly the exclusion zone is also secured by the US artillery units stationed near Al Tanf, which actively prohibit any SAA activity in the zone and have the ability to hit anything in the zone with their artillery units, which means the SAA aren’t allowed to pursue Isis into the zone and finish them off once and for all because the US always attacks them when they do, [twice so far but that was several years ago]. The Russians already have one artillery base just 10 km west of the US exclusion zone but I think they need two more, another one just north of the exclusion zone and another to the south of it, that way nothing could get in or out of the exclusion zone without also being within range of Russian artillery units [which have a 50+ km range], I think that would help slow down Isis’s activity. All the food being supplied to the refugees at the Rukban camp isn’t being eaten by refugees either, the Isis fighters hiding out in the US exclusion zone are getting more than their fair share of that humanitarian aid.

ISIS/Daesh are empire’s foot-soldiers. If they didn’t have this massive backing and financial support they would be a bunch of nutters in the basement of a madrassa. ISIS is a mercenary army, not a popular movement like msm tries to portray them, and CIA has plenty of money to buy more mercenaries and funnel them in through at-Tanf.