A large group of the Su-25  fighter-bombers is ready to be sent to the Hmeymim airbase due to the failure of the truce. 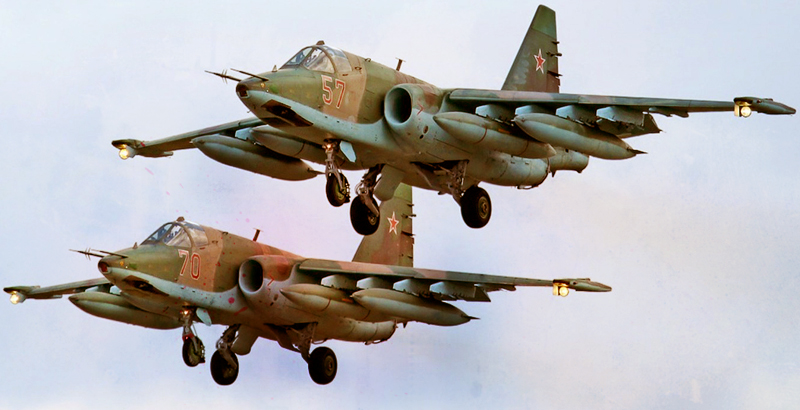 Russia has increased the number of its air grouping at the Hmeymim air base by sending additional the Su-24 and the Su-34 fighter jets, the Izvestiya newspaper reported, citing a source in the military-diplomatic circles. The Su-25 Grach aircraft are also prepared for the flight to Syria, however, an order on sending it still has not been given. The increasing of the Russian air group comes amid threats of the US to activate the so-called Plan B on Syria, which involves intensification of air strikes, additional transfer of the Special Forces and increase the supply of arms to the ‘moderate’ opposition. The Plan B was developed by the US security agencies for the case of failure of the US Department of State’s efforts to reach an agreement with Russia.

As the source noted, if necessary, the group of the Russian Aerospace Forces would be strengthened in 2-3 days. He also added that the Su-25 fighter jets, intended to be sent to the Hmeymim airbase, have already been selected from the regiments and prepared for the flight, its crews are waiting for the order from the high command.

According to the source, at the moment, the strengthening of the Russian air group was small and virtually had the character of a planned rotation.

“Several the Su-24 fighter jets, equipped with the SVP-24 sighting system, and the Su-34 aircraft were transferred to Syria. Also now, replacing of those bombers, which had previously returned to Russia to undergo routine maintenance, has been carried out,” the source explained.

According to experts, use of the Su-25 aircraft would allow to significantly increase the number of sorties of the Russian air power. While the Su-24 warplanes are equipped with better aiming sight and provide higher precision bombing in difficult conditions, and the Su-34s with its optical-location complex are capable to detect targets and specialize in high-precision weapons, the Su-25 fighter jets are lighter and easier, and are capable to strike with precision 0.8.

As political scientists noted, Moscow shows its willingness to take decisive measures in the case of braking of the negotiation process, increasing the group in Syria. The forces buildup may become an answer to the actual failure of the ceasefire.

Raise the tempo and defeat the US terrorists* before the US and their head chopper mates supply new munitions. if they are all dead then there will be no one to use them.

*US Terrorists as its only the US that militarily supports them.

Russia must use bigger bomb against terrorist and Russia s.400 and jet must engaged American jets as they encroaching Syrian air space against Syrian approval…

Only the rapid application of overwhelming force shall win the war. Gradual escalation giving the enemy time to adapt shall only extend the war and increase the possibility of defeat – like the US in Vietnam!