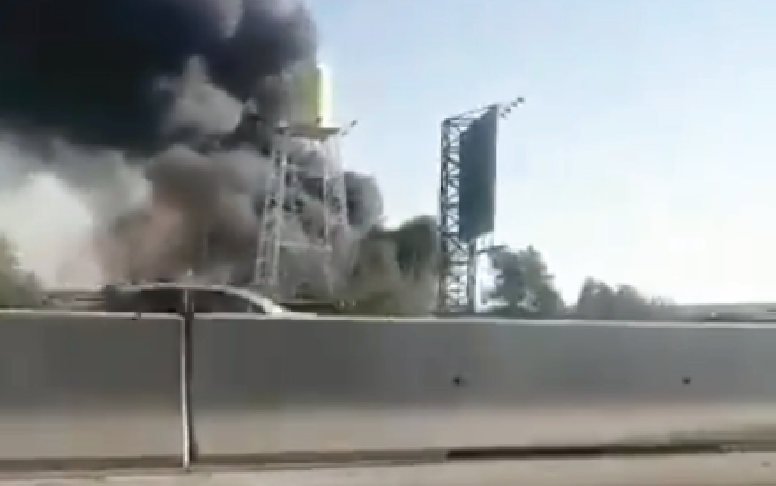 On June 7, a massive fire broke out in the Behnoush soft drink factory which is located to the west of the Iranian capital Tehran.

“A few minutes ago, the incident was notified through the telephone network, and agents from several fire stations were immediately dispatched to the scene,” Jalal Maleki, spokesman for the Tehran Municipality Fire and Safety Services, told official Islamic Republic News Agency.

Later, the spokesman told the Iranian Students News Agency that the fire had started in an open-air storage area where flammable materials were stored. No casualties were reported as a result of the fire.

An official from the Behnoush company ruled out the possibility of sabotage. He contributed the fire to the high temperature. Tehran’s temperature was nearly 37 C today.

Over the last few months, fire erupted in several military and industrial facilities across Iran. Just a day earlier, a fire broke out at a steel factory in the Iranian city of Zarand in the central Kerman province.

While Iranian officials ruled out the possibility of sabotage in almost every recent fire, the rate of these fires suggests that at least some of them were intentional.

Coca Cola and Pepsi only.

It’s nothing out of the ordinary.

There are no sneaky mossad joos dropping cigarettes in Iranian factories.

SF do you guys think you are funny? Or just wanting to change and become a new website which reports on accidents – if so you also very bad at it.

Sure there are a number of “fires” lately and many or most may very well be accidents or as a result of stupidity but there are also players that would be keen to use sabotage such as MEK , Israel and of course USA , Britain all of whom have the ability to do so. Is there a pattern to these fires such as incompetence or all just accidents . This one obviously looks like an accident but was the one at the nuclear plant or the burning of their biggest ship also .. Interesting stuff to ponder and not to be hidden so yes there are countries that want too attack Iran so all needs to be put in context..

It is not hard to understand which is an accident and which is sabotaged. The problem is websites such as SF making such titles as “A FIERY COINCIDENCE” etc etc and make it seem like sabotage without proving anything – besides saying in the end, “such things happened in Iran”. This is wrong in many ways…that is my problem with SF, you most likely saw the video of the Tondguyan refinery, before the explosion, ofc, there was security footage of the accident.

Yet people who saw it said things like, “The fact that someone records pre-fires something that will be going to happen and points camera at that place, that is more than enough to know that is sabotage.” Someone was recording the security footage on his phone or camera.

Okay here, the main problem is when you feed people this kind of mindset, they end up blaming everything on sabotage or someone did it because x or y. Fuking stop…Iran has problems, real problems they know it as well…from MEK, yankees to people living in Iran against their government like any country in the world, we can’t nor we should ignore those FACTS.

I have been in SF for a long time and over time I see people change – from being open-minded to right out stupid. You with Iran-China-Russia or you fuking ape, that’s where we are right now. I no longer get info from here nor can have chat with someone based on the topic or read.

To what you said about those events, nowadays the MEK isn’t even trying to fight against Iran, do you know why? Because Iranian is killing themselves… Do you think Iran could have stopped the bomb that was placed near their nuclear factory? I do, so who’s in the wrong here? Iran in my point of view because how could they not hire someone they can trust. The biggest Iran Navy ship that burned in Omen sea…if it was an accident I can believe that, remember an Iranian Navy vessel hit by friendly fire – Konarak – last year. When was the last time some country sabotaged an Iranian warship? Again the problem is within Iran Navy… The other Iran nuclear sabotaged was by Zion and yankees…who’s to blame besides Iran – mainly Rouhani fuk face with his stupid deal which let the UN just walk in and look at anything and each site…the UN give that info to Zion and yankees…

I end my BS by saying this, as someone who has been to Iran and talk to young Iranian and with my M.E friends – I can say that a lot of M.E countries such as Iran-Syria-Iraq wants to become – yes become like the west. Those young ones are the future of their countries…so I don’t think we stop seeing stupid shit happens in M.E anything time soon. Like just think about how that Rouhani guy came into power…just think about that.

Cia & Mossad economic sabotages are getting rife in iran.

US, Russia up in flames too.