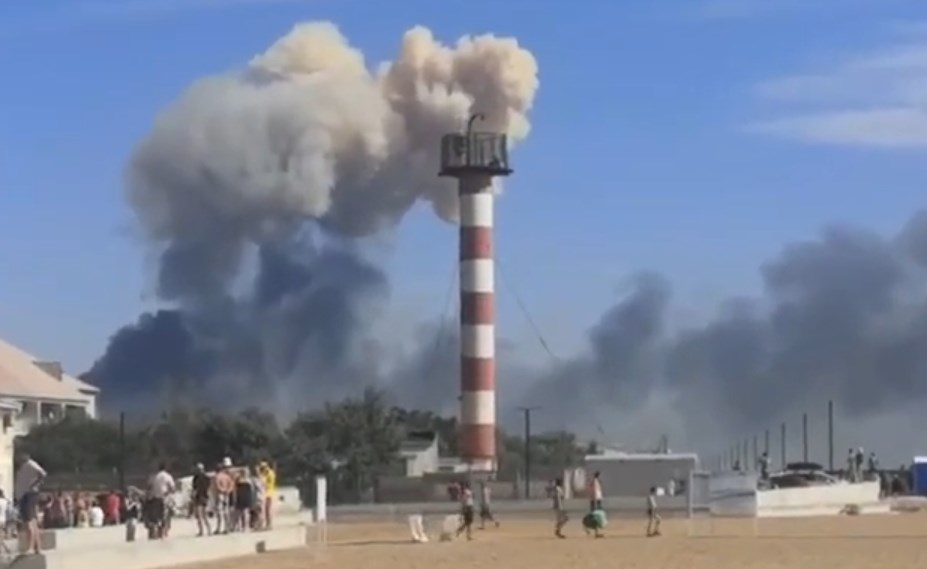 On August 9, explosions rocked Russian military air base “Saki” near the town of Novofiodorovka in the Republic of Crimea.

The Russian Defense Ministry reported that at around 15:20 local time several aviation munitions detonated on a storage site in the area of the airbase. According to the report, the aviation equipment at the airfield was not damaged.

“Measures are being taken to extinguish the fire and find out the causes of the explosion,” the statement said.

The defense ministry added that “there was no fire impact” on the ammunition storage area at the airfield.

Sergey Aksyonov, the head of Crimea, who is now on the site, confirmed that at least one person was killed in the incident. Five more people sustained injuries, including a child.

Security and emergency services are working in the area.

Users in social media have also spotted a commercial drone flying in the area near the airbase. It is likely that the drone was launched by some person from the nearby beach, which is popular among locals and tourists. 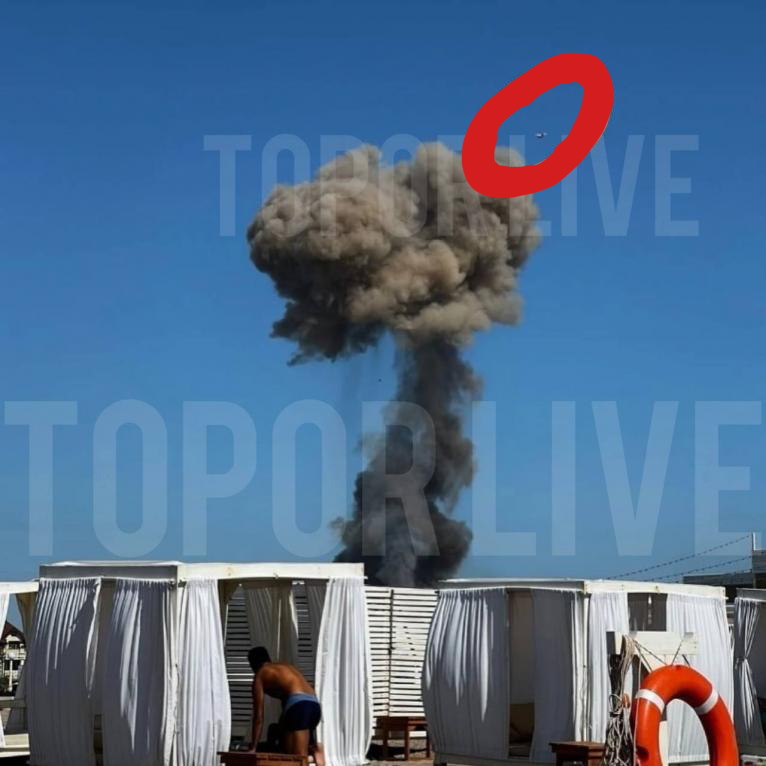 It is interesting to note that earlier on August 9, US state-funded media “Radio Liberty” published satellite images of this very airbase: 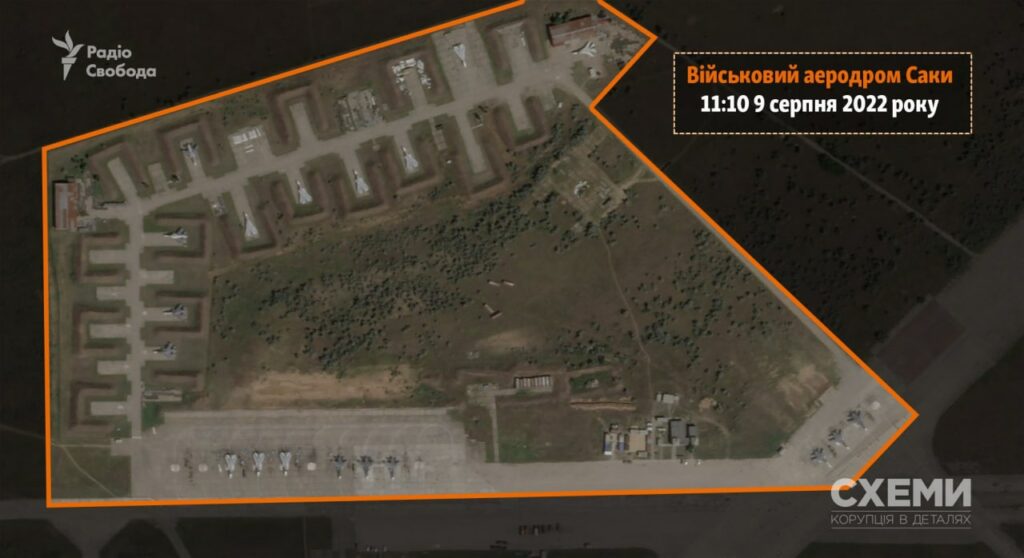 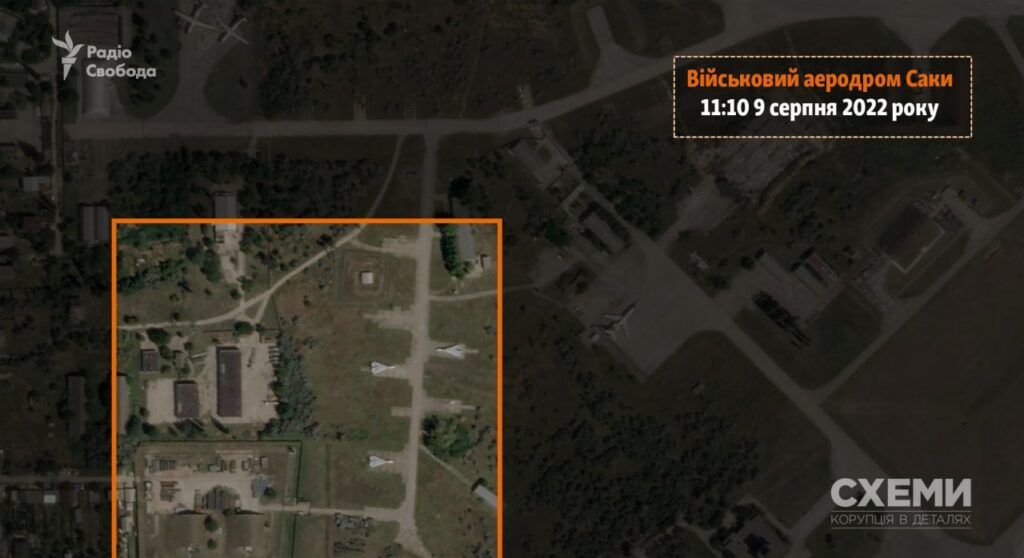 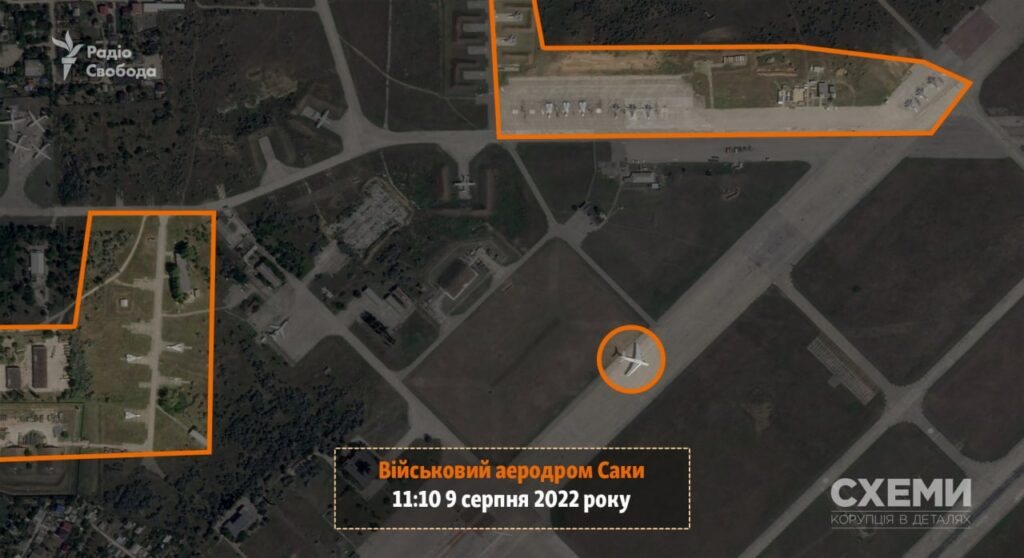 Currently, the main version of the incident is an accidental detonation of ammunition at the airfield. Nonetheless, the investigation will likely consider a possibility of sabotage.

At the same time, Ukrainian propaganda outlets already started speculating that explosions on the airfield were caused by a ‘precise strike’ with US-supplied missiles. Regardless the reality of these claims, they once again demonstrate the posture of the current Ukrainian regime, which is determined to continue the conflict and reject any possible diplomatic solution of it. In these conditions, the resumption of the active military actions of the Russian Armed Forces in the eastern and southern sectors of operations in Ukraine is just the matter of time.

What the hell is going on Crimea ?

Anti-semite spotted. Be careful next time you sleep. I may be watching you 🇮🇱🦾

Russians may now test fire its latest hypersonic Sarmat with one of those obsolete US aircraft carriers as a target.

Spectacular blasts at Russian air base 200km into Crimea prompts speculation the US provided Ukraine with longer-range tactical missiles and Russian military is an inept rabbit being led to the slaughter.

i wonder
Reply to  Paul

It has to be because the tonka u only has a range of 160. perhaps the newer versions have 300 k range but i might be mixing that up with the russian iskander, which is also a predecessor of the ussr version. the himars has the longer range version, but i think the single missle per pack only had a speed of 2,5 mach. this should be interceptable for the russian to system and others that are at 2.5 /3.5 rated

Clearly the Americans arranged some of attack and then advertised their involvement by posting the pictures of the base. The Kremlin’s response will be the typical response, whine.

I think they should sink some aircraft carriers

PLAN and PLAAF probably thinking along the same lines.

Russian lack of decisive clarity is simply mind boggling. Russia is fighting all of NATO without a general mobilization or even punitive measures against the Jew cabal in Kiev. This war is about the destruction if Russia and control over its immense natural resources. The Russian military so far has come up short and US and NATO attacks on mainland Russia are next. The US deadbeat economy is pouring 10% of its dwindling GDP into arming the Ukrainian Nazis and foreign terrorists. As Gravitas TV has been advocating daily, RUSSIA NEEDS TO OBLITERATE ZELENSKY AND THE JEW CABAL. This war will never end unless Russia acts with maximum force.

I agree, Putin has to go all in or he may as well accept defeat right now . If Ukraine’s weapons suppliers need to be hit , so be it . This war is for all the marbles.

Putin and the Russians had better get their shit together.

Check this one out. Clear two simultaneous explosions followed by a third.

Russian confusion and weakness is only emboldening more NATO attacks on Russian soil. It is beyond rational thinking that the imposter Jew Zelensky is still alive and killing Slavs for NATO.

Another kebab. Nobody is holding you from fighting NATO. Go ahead.

Another kebab strategist eh. Go and fight US and NATO. We will root for ya.

Of course Ukraine doesn’t want to negotiate, why would they? They will receive more and more weapons until they drive the Russians out. The Russians can’t fight back because they refuse to take any of this seriously and act like this is some police action like in Syria. And all the while the oligarchs continue to supply oil and gas to the enemy! Madness.

sucking cock in Langley not good for your monkey pox

Like in Syria, you mean that all of the USIS will be piled up in lwow?

Pigs can fly and the mosqwa turned into first underwater Battleship, snake Island left as good will gesture, russian shithole raptist looting joke soldiers, never ever digged in nuclear wasteland of Tschernobyl, all is going to plan, T62’s are reactivated due to climate change issues…saving fuel compared to gas guessling t80’s, iranian drones are looked after just as financial good will towards the Mullahs, russian charity so to speak and destruction of russian car+ aviation industry is also part of queer lbqtw Putin’s plan to safe the Planet, russian Version of friday for future.

The old pervert seems to want to get into greta’s pants.

We all saw the ‘performance’ of russian AD systems in Armenia, Syria and Libya 😆😆😆

Tommy was blinded by sperm in his Nebraska trailer park Armenia–not used….Syria…every missile or drone intercepted near Latakia by Russian panstyr s300. s400 non-existant in Libya

Zionists bomb Syria every day and the S-400 have done jack. Russia has proven totally hollowed out and very weak and will fold soon.

Time for Russia to take the gloves off,they could start by missile strikes on the Ukrainian leadership in Kiev.

No matter what the cause, If this is left unpunished? Bruh …. It will be a clear evidence that Russia has become weaker.

Russia is ‘clearly’ advancing through the Donbas, since Feb. Since when did advancing through hostile giant earth fort after earth fort ever resemble weakness? This is NATO’s finest, best armed and trained, directed and given space age intelligence and positioning data, and they lose more every day.

Russia gets stronger everyday, while NATO runs out of ammo and weapon systems. The hohals are splatter for Western sob stories, while more billions disappearing from Western public finances.

Why do u care about Western billions?

Chinese pay for all of this and so noone in the west gives a fuk…+Ukraine war is cheap.

War is Business and Business is good.

If Russia kills the political leadership in Ukraine then who takes over in Ukraine? Russia might be better dealing with the devil they know. I imagine they have pretty good intel on the real power structure in Ukraine.

If Ukraine surrenders with no legit government Russia could end up being responsible for the whole of Ukraine … they sure as fuck don’t want that sack of angry hornets living in the same tent again … they want a hard border with watchtowers, searchlights, 20Km no mans land, dogs, mines and machine guns.

Russia could eliminate Zelensky following a declaration of Ukraine as a terrorist state related to the continuous shelling of civilians, thereby accomplishing its mission of denazification and demilitarization… Effectively ending the war. Then safeguard a national election where Ukrainians could freely vote whoever they want to be the next Ukrainian president whom Moscow could negotiate and draw a new map between them.

Russia must not hold its hand and destroy headquarters of Ukronazi regime in Kiev.

So far nothing has exploded! You’re forgetting about plasma weapons coming from space. Yesterday Russia bombed an American base in Syria, so for the record! Remember how they set fire to California!

Say hello to ATACMS, best is yet to come. Russian invaders have to run or die there :D No comment about russian MOD….. its just typical russian COPE :D

Calm down clown, you’ll wee yourself.

Lol. Another red line crossed and Russia tucks tail at the thought of retaliating against the real perpetrators. Take your red line threats and shove them.

Explosions on a Military airport,but a child gets injured…what Nonsens is that?

Or is it admition Putin’s army is out of manpower and now child soldiers are on active duty?

The Russians are not clowns. They make the mistake thinking the west has some morality and decency.

Russia is slowly losing this fight. The worst thing is they don’t seem to care. Still no strikes on decision-making centers

Ukraine is not even making any serious counter attacks so where is Russia losing.

Hmmm … five posts with the same comment each with slightly different wording … it’s almost like the troll center handed out a new script today.

You mean Troll Centre HQ. Which is probably tel-aviv but may be city of london….

,,The Ministry of Defense of Ukraine would like to remind everyone that the presence of occupying troops on the territory of Ukrainian Crimea is not compatible with the high tourist season.” dumb russkies never learn leasson

How should the normal Ivan flathead learn anything?

It is a shithole country, shithole Economy, crapyp history, anyone with a brain leaving, nothing to offer the world…just shit

At least one SU-24 destroyed

update on twitter: at least 3 destroyed su-24…waiting for new footage in next few hours ;)

Destroy all the government municipal building in Kviv. !

Great idea…tell the russian Mod… I guess they never ever thought about it.

Another propaganda story disseminated by the NATO terrorists and their controlled op info sites to make the disinformed gullible reader think that the Ukrotards and their Anglo-Zio cnut masters are actually doing something on the ground. The litmus test to determine who is a US hasbara controlled opposition info mouthpiece is…anyone who reports on a purely propaganda victory as such is bought and paid for. I’ll give you names if you want, but anyone with close to a full working brain can deduce it on logic alone by themselves. In the interim, the Ukrotards and their foreign allies are getting slaughtered on the battlefield using 1960s Volkswagen Bugs as transport vehicles while Russia hasn’t even revealed a fraction of all of its hidden goodies yet.

Ah the hidden goodies…1000 T14 armata tanks coming? The new north front pushing for Kiew? What else is up Putin’s sleeve?

The Allies are bringing the pain to russia!!!

President Putin should press the red button, he should not worry about the US sending back nukes, Sarmat would destroy most american nukes, they cannot send any back.