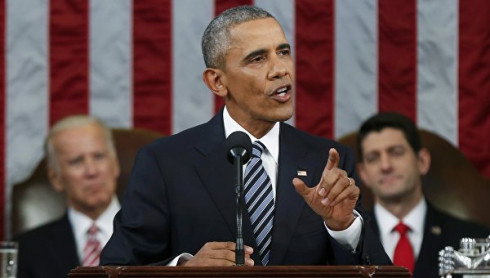 Original by Rostislav Ishchenko published by RIA; translated from Russian by J.Hawk

In approximately one year, on January 20, 2017, the 45th President of the United States of America will be inaugurated. which means that the 44th president, Barack Hussein Obama II, has only about one year left to rule.

Incidentally, he acquired the status of “lame duck”, or a president incapable of deciding anything and working exclusively for his party’s political candidate in the upcoming elections, somewhat earlier. By US tradition, the president becomes a “lame duck” after his final “State of the Union” address.

Obama gave that speech on January 12. He was clearly in a hurry to get it over with. In 2014, for example, the address was held on January 28, which is logical since the first speech of this type is usually made after the inauguration, which means toward the end of the month of January.

Why is Obama in so much hurry to exchange his status of a fully-fledged head of state for one of a downgraded player in someone else’s election team?

In most of the US disaster movies made before 2009 (in other words, before Obama entered the White House), the presidents in the era of US collapse are either African-Americans or women (in one case, an African-American woman). I don’t know to what extent this is due to the traditional US political correctness (after all, we are talking about the death of a state founded by White anglo-saxon protestants). We might possibly be dealing with clairvoyance that is innate to creative people. Jules Verne predicted the coming of the submarine, after all. In any event, in the 2009 election the struggle for the Democratic nomination came down to an African-American and a woman (Barack Obama and Hillary Clinton).

Obama won but, considering Hillary’s level of support within the Democratic Party, he was forced to appoint her as the Secretary of State. Officially this is the fourth most important (after President, Vice-President, and Speaker of the House) position in the US hierarchy. Considering that the US president is not only the head of state but also the head of government, the SecState is more than merely a minister of foreign affairs. This position is more akin to the first deputy prime minister who coordinates all government activities concerning foreign relations. And everything concerns foreign relations, including intelligence and the use of armed forces.

Considering that US international behavior is mainly motivated by advancing the interests of US and US-based transnational business, the SecState is a key figure in the US executive branch. It’s no accident people like Kissinger and Albright are as well known as the names of their presidetns.

Therefore US foreign policy during Obama’s first term was conducted with Hillary Clinton playing the decisive role. Hillary is again entering the presidential race and has good chances to become the Democratic nominee.

What is more, when John Kerry headed up the Department of State during Obama’s second term, he became a hostage to Clinton’s policies and team she established at State, with Victoria Nuland being one of the most well known representatives of that team.

While attempting to focus on internal problems at the expense of foreign policy which he turned over to Clinton, Obama discovered at the end of his first term that Clinton’s policies demanded huge and growing quantity of resources to implement. The draw on resources is blocking internal US reforms. The wife of the 42nd US president and Secretary of State to the 44th succeeded in dragging Washington into so many conflicts and crises that the mess she left in her wake still has not been disentangled. Obama, whose presidency is considered a failure by a majority of Americans, is reaping the results of Hillary’s policies as Secretary of State.

Plans for the Last Year

Obama’s problems are not so much his own as the Democratic Party’s. Foreign policy failures (in Syria, Ukraine, relationship with Russia) became the basis of Donald Trump’s campaign rhetoric, enabling him to take a leading spot among Republican candidates. It does not mean that Trump will win the nomination, but it’s a serious warning suggesting that today foreign policy is the Democrats’ most vulnerable spot for the Democrats in general and Hillary in particular. This is what not only the Republicans but Hillary’s Democratic opponents will assail.

Nomination outcome may be known as early as Super Tuesday (when the primaries are held in several states all at once) which this year is scheduled for March 1. By late summer, Democrat and Republican party conventions will officially nominate their candidates, and the election will be held on November 8. Thus the presidential race is already on and it will only intensify.

Hillary Clinton must address two problems. First, she has to convince her fellow Democrats during the next 2-3 months that she is capable to beat the GOP nominee. Secondly, she has to deprive her GOP opponents of their main arguments in the second phase of the race.

As stated above, foreign policy is the main target of criticism. Clinton is inextricably linked to it, being the former SecState, and can’t shift responsibility for it onto someone else. Her only chance is to present positive results in the upcoming weeks and months. It means that Barack Obama has to demonstrate foreign policy successes in the final year in office.

Which is what he is trying to do. Not since today or yesterday, but already starting in the summer and fall of 2015. That’s when the US position on Iran softened. The US agreed to accept the previously rejected Russian proposals on monitoring the Iranian nuclear program in return for lifting of UN sanctions. As a result sanctions were lifted and Washington immediately introduced new ones. Everyone’s happy.

Russia and other countries desiring to increase trade with Iran are no longer bound by international sanctions (Washington’s decision, unlike UN’s, extends only to the US). Iran has access to its assets in foreign banks totaling over $50 billion, and the prospect of returning to the hydrocarbons market. Sanctions are preserved as far as interested US firms are concerned, however.

The next phase was the US dropping its initial demand for Bashar Assad to step down as a condition for resolving the Syria crisis, which was unacceptable both to Moscow and Damascus. Negotiations have begun though are moving at snail’s pace.

Washington now has freedom of maneuver. On the one hand, it could at any moment reach a compromise with Russia and declare some form of a “general national consensus” in Syria, while at the same time collaring its overeager Turkish and Saudi allies. On the other hand, since the civil war and foreign-supported Islamic State intervention cannot easily be stopped, the new administration will have the ability, provided the circumstances are favorable, to retrieve lost positoins.

The US also officially supported Russian, French, and German positions on Minsk 2 and demanded Poroshenko promptly get busy on amending the constitution in order to federalize Ukraine. Considering the time required for such changes to be made, the process could last until the fall, during which the terms of the compromise would be constantly debated with Moscow.

Should the Kiev regime survive that long, one can then attempt to freeze further Minsk agreeement implementation. If it collapses, then the responsibility will be shifted to the European partners who initiated the Normandy format and coauthored the Minsk format with Russia.

For the internal US consumer, the intensive negotiations with Russia over Ukraine and Syria can be presented as a victory for the US, consisting of forcing Moscow to engage in direct dialogue. Such reports have already begun appearing in not only Western but even Russian media.

In general, Obama’s last year will be characterized by US diplomacy’s efforts at formal constructiveness in negotiations, while accepting minimal obligations. This is why it is important to use the internal political situation in the US which is critical for the Democrats to extract the maximum number of concessions and to formally codify each agreement reached, up to and including UN Security Council resolutions, as was done with Minsk agreements.

Now that Washington has been forced to resort to negotiations, one must minimize its ability to abandon them. Because as soon as the outcome of the presidential race is clear, the urge to abandon the will quickly appear.

Well…j hawk…you need to remind the writer of this article… That Obama inherited the nightmare of George Bush administration… And all the zionist neocons…filthy illegal wars… Hilary Clinton is a lame duck !

I hope Jews will kill this moslem pig in WH. He did not deliver anything useful.