According to the former president of Kyrgyzstan, Askar Akayev, Kyrgyzstan’s rejection to deploy Airborne Warning and Control System (AWACS) aircraft in the International Airport in the country’s capital was one of the reasons for the 2005 Tulip Revolution. 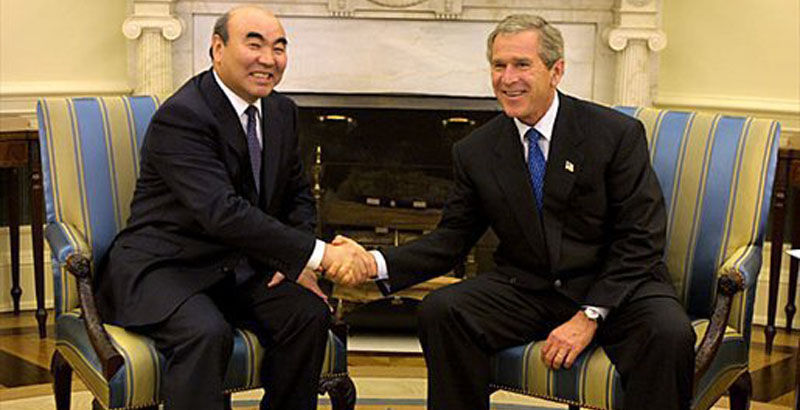 US then-president Bush shakes hands with Kyrgyzstan then-President Aska Akaev in the White House on Sept. 23, 2002 (Photo: The White House)

Kyrgyzstan‘s rejection, obtained by the US on its request for deploying American Airborne Warning and Control System (AWACS) aircraft in the Manas International Airport in Bishkek, the country’s capital, was one of the reasons for the subsequent 2005 Tulip Revolution, ex-president of Kyrgyzstan, Askar Akayev said in an interview with RIA Novosti on Thursday.

Akayev held office as president of Kyrgyzstan in 1990-2005. The Tulip Revolution ousted him from power in 2005. Currently, the ex-head of the country resides in Russia.

“Department of State representatives suggested in 2004 to allow AWACS in the Manas airport. A special assistant to the secretary [of state] arrived to discuss this operation…Of course we could not allow this. Our answer was strictly negative. It was not negotiable…That was one of the reasons they planned the Tulip Revolution in Kyrgyzstan,” Akayev said.

In 2001, the US military’s Transit Center at Manas was deployed near Bishkek in order to support military operations and deliver equipment and personnel to Afghanistan. In 2014, the center was closed and handed to the country on demand of the Kyrgyz authorities.

As a new country, they have to find, which are the real friends as well as enemies. That will take years because there are many choises by many aspects.

Number one is what the Kirgisians really want themselves in their devellopments for the future.