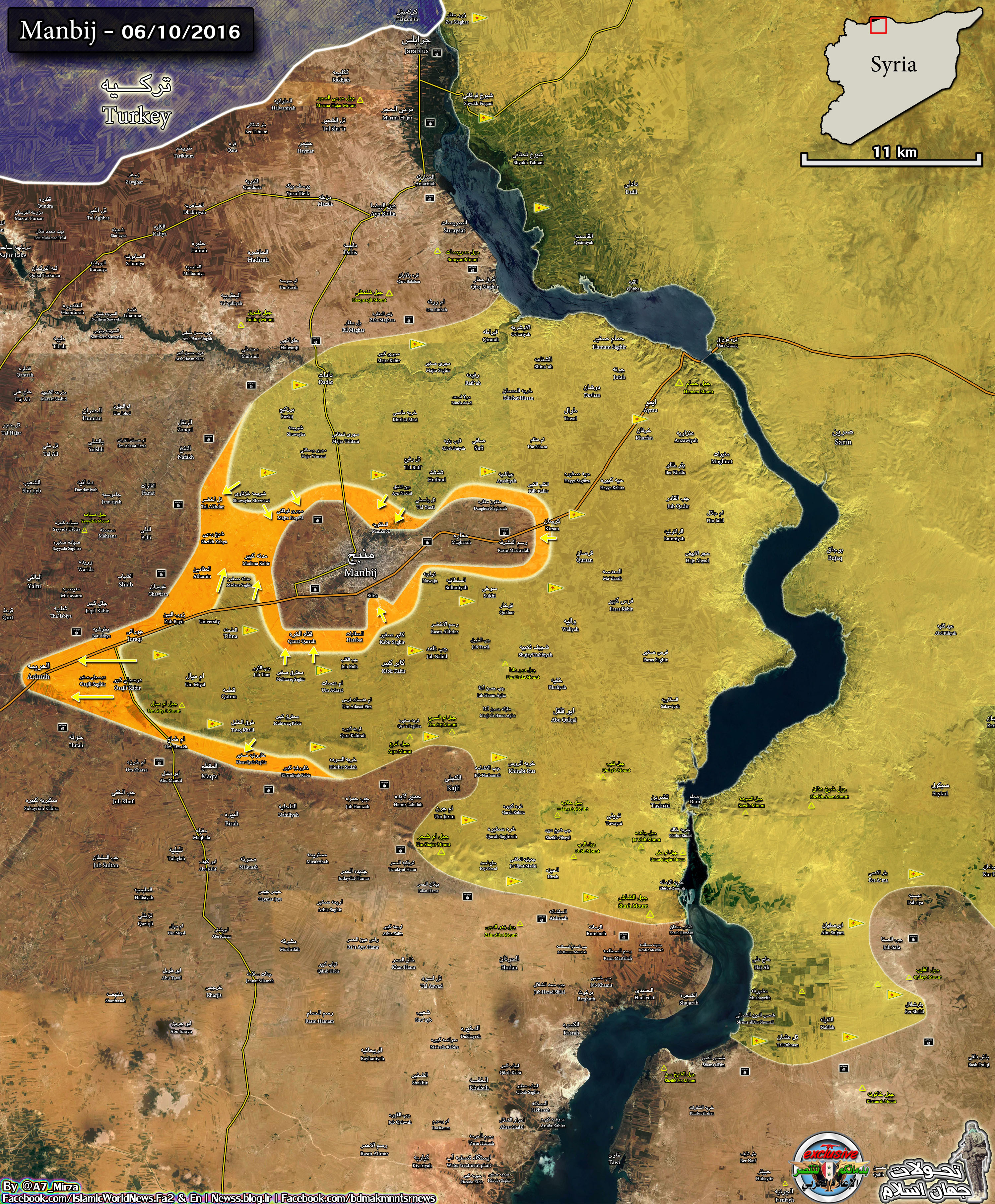 On June 10, the predominantly Kurdish Syrian Democratic Forces (SDF), supported by the US-led coalition air power, encircled  the ISIS-controlled city of Manbij in Syria’s Aleppo province. The SDF also killed the ISIS governor of Manbij, Osama al-Tounsi. His convoy was exiting the western gate of the city, heading towards al-Bab, when it was targeted by SDF units. According to Kurdish sources, some 10 ISIS militants, including Osama al-Tounsi, were killed.

On June 11, there were no reports yet about attempts to storm the Suni-populated city. In turn, SDF units were advancing further in Northern Syria. There are 2 directions of the SDF military efforts:

Earlier in June, Christopher Garver, the official spokesman for the US-led coalition against ISIS promised that the Kurdish People’s Protection Units (YPG), that are the main local striking force of the SDF, won’t advance further in Northern Syria when Manbij is liberated. However, Manbij hasn’t been liberated and Kurds are advancing to the North. And this is a big problem for the US amid the tensions over the “Kurdish issue” with Turkey.

US officials and Western media disseminate reports about some “Arab-led SDF forces” that encircled Manbij. These reports are a wishful thinking or a direct disinformation. There are just not enough Arab militias among the SDF for such advances. In turn, the Kurdish nationalism and attempts to set an autonomus region or even independent in Northern Syria provoke a serious antagonism among the Arab population. The tensions with locals don’t allow Kurdish forces to strom major Arab cities without a threat of humanitarian disaster there [major destructions in residential areas and casualties among local populations] and grow of the support to Islamist militant groups by the locals [especially if these are Suni-populated cities].

This is why the Washington argues about some “Arab elements” among the SDF and the Pentagon was pushed to deploy special operation forces troops to support SDF advances directly on the ground. But the question arises: “Is this enough?”

The recent developments may show that the Kurdish Democratic Union Party (PYD) and its military units, YPG, prefer to seize more areas along the Syrian-Turkish border instead of launch bloody storms of Arab populated cities, controlled by ISIS. 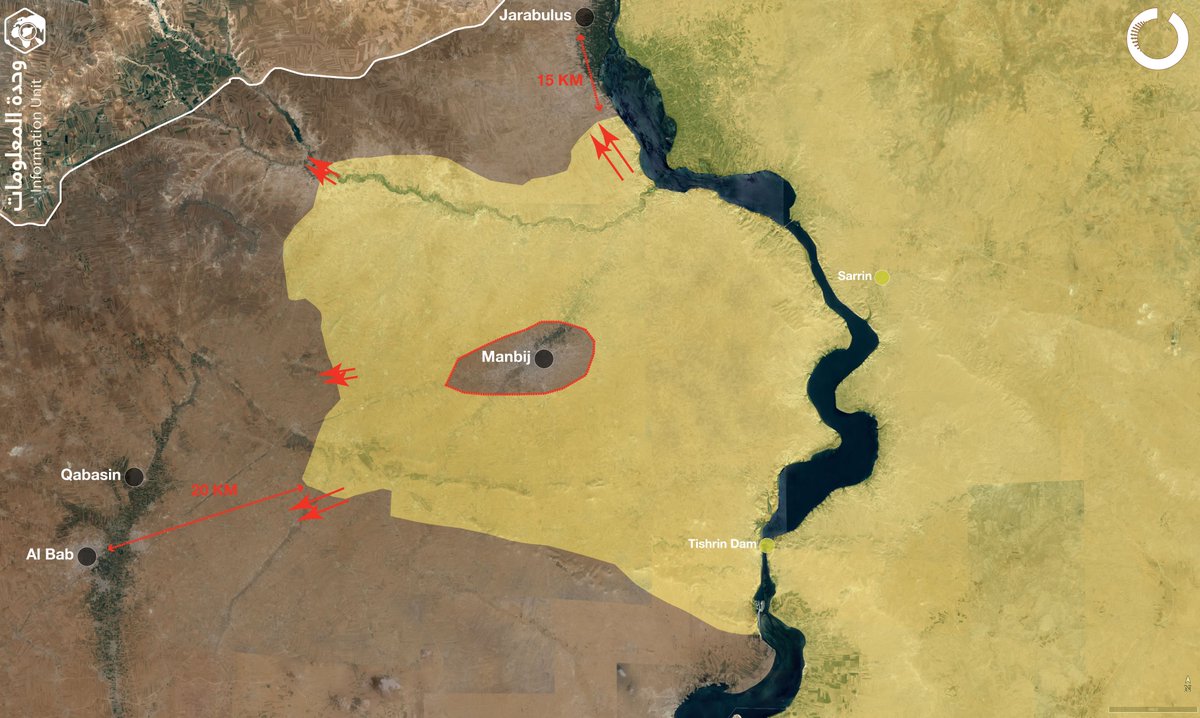 Now that shows how much operations by SDF units were “managed by US”.

I hope so, even the Ruskies will like it. They very well know Assad’s united Syria isn’t going to be a reality any time soon, and if somehow he get’s kicked out by some of his own, the future of Shia dominated Syria is done. And Sunnis won’t let them use the warm water port in the mediterranian, so best option is a federal Syria, with Assad, his Shia govt and anti-Turkey Kurds (PYD unlike KDP) have special zones. This is also good for the world, little safe and secular place in middle east besides Israel.

“managed by US” pehraps the meaning of the word is not what I think it is.

In fact these are not arab cities but mixed cities where arabs were between 50 to 60% of the population, kurds 25 to 35 and the rest syriacs, turkmen, chechen etc.

However, being encircled, the cities will not run away.

The countryside might be different so they might indeed want to take Al Bab and the string of kurdish villages and towns between al Bab and Ahres.

Erdogwn is so going to hate all of this.

Al Bab was settled by Circassians by the Ottomans in the 18th, 19th century.

There are other circassian, chechen, villages in the area, the men used as soldiers by the Ottomans.

Yes, you are right, there are towns with mixed population.

“…This is why the Washington argues about some “Arab elements” among the SDF and the Pentagon was pushed to deploy special operation forces troops to support SDF advances directly on the ground. But the question arises: “Is this enough?”…”

It’s enough for the U.S., U.K. and French to secure oilfields and pipeline routes. That’s all that matters to them. The Kurds are an inconvenience that must be dealt with, but that’s no reason to delay the theft of vast areas of Syrian sovereign territory while they have the chance. If the Kurds supposedly ‘own’ that land, then the oil drilling and pipeline route rights can be easily bribed away.

Look how easy it was for oil companies in Iraq. Barzani rolled over on the Kurds in an instant just as soon as he got his sacks of cash from western oil interests. All this while Iraqi Kurds starve.

I wonder how much the Kurdish commanders are telling the us what they want to hear then just doing what’s best for the kurds. I sincerely hope they are and cooperate with other Syrian peoples for the good of each other. With the us so desperate to have some sort of controllable ground force, that aren’t outright terrorists, the kurds could play them and get back at nato for mistreating them so in the past. Surely they must see how the so called “us led coalition” is funding are aiding terrorists and proxy forces.