The Kurdish People’s Protection Units (YPG) reseized the village of Umm Al Julud from the ISIS terrorist group northwest of Manbij in Syria’s province of Aleppo on September 10. The recent YPG operations in Aleppo province indicate that the Kurdish group is not going to fulfil the agreement with the United States and will not withdraw from the western bank of Euphrates. 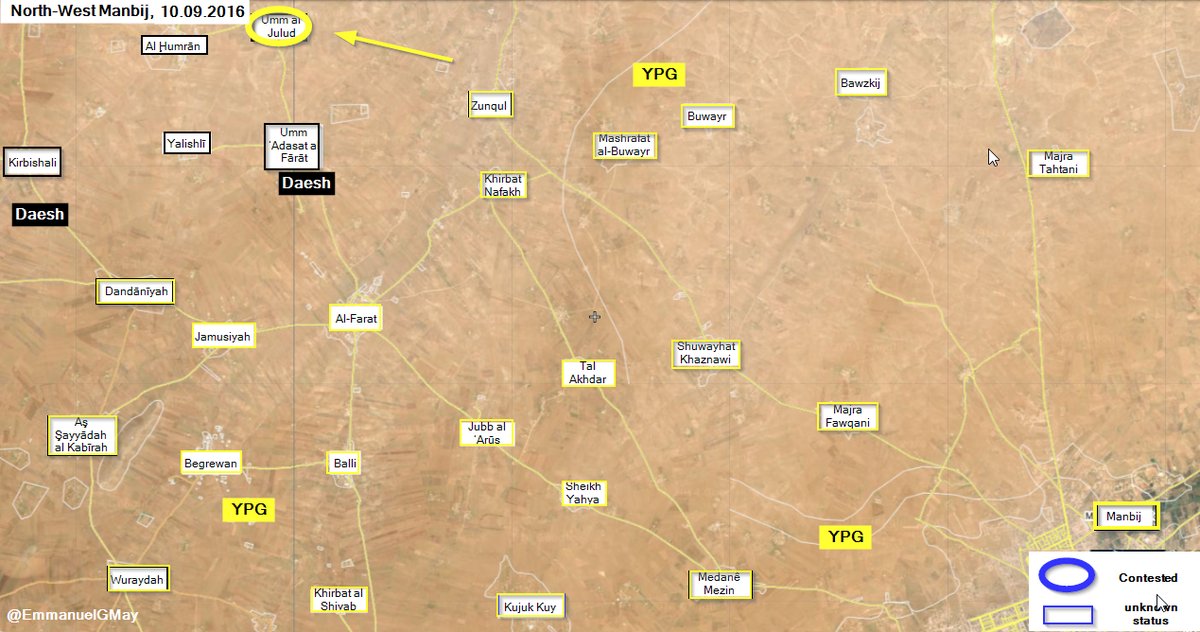 Awful maps again! What is that???

Towns with their name in yellow box are YPG controlled and those with black boxes are ISIS controlled. And the one that is marked is the one that changed hands.

They’re a mess. No reason why they can’t show this with normal maps.

You seem disappointed. You should stop coming to SouthFront.

Or they could show their usual maps rather than keep inserting these eyesores.

Or-or you could just click the image to see the full-size map.

Wait, I think I misunderstood. If you mean because of the map’s style then I would urge you to stop coming. Because I don’t want you to breakdown into a psychopathic, murdering rampage from these maps. ❤❤❤ ????

Are you insane Brandon? You seem really… off. What I want is Southfront’s usual maps, these:

You know, instantly clear, colourful, not a headache as you try to determine what’s where.

The first one is very smal … Hope You are not in jail.

It didn’t appear properly for some reason, click on it. As for the second part of your comment, huh?

Well, the site need more supporter, so in the name of peace come often.

This map fill out my whole screen if I dot left side of the mouse. Another trick could be to save the map and rezies and clarify it. Even smal free programs can do that. I have at least 5 that can.

Office picture manager, The old Paintshopro still working, the old paint still working – even VLC play can do most of them and windows photo viewer.

If the picture or painting says NO WAY – You dot Your little mouse in its right eye and can then change ikon to open it between every program(at me at least those 5).

Make names for You have and put all in fx manbij, birds, cars whatever. You can get pro´grams for that too.

It took me some time to learn. But it makes it much easier to open everything all over the world. saw pictures from earth quake in Tanzania. Looked like only small war, but well produced.

The recent YPG operations in Aleppo province indicate that the Kurdish group is not going to fulfil the agreement with the United States and will not withdraw from the western bank of Euphrates.

Personally, I have no objection to the YPG on the western bank of the Euphrates but I do really worry for the YPG losing their air cover from Operation Inherent Resolve which is a United States-led operation, who take their orders from VP Joe Biden and we all know what he said and he must have had his reasons for saying what he did, most likely because that’s what Turkey wanted him to say.

So unless VP Biden has a change of heart or he is overruled by the President, it’s a huge worry. I really want the YPG-SDF to keep their air support from Operation Inherent Resolve – and I am sure that the YPG’s many friends and allies in the United States, NATO and the West feel exactly the same.

We’re wishing the YPG well, we are praying for them, we are hoping it works out for the best. But it’s just a huge worry.

Are the Kurdish forces are making a go for Al Bab , or north or south of it ? They do need to unite their territory north of Aleppo with Manbj and east, or loose it . Will they be able to stand against the Turkish army ( or SDF) ? They do know the SDF are just more imported , Wahhabi jihadists with no love for non-believers. They just might put Turkey in its place, and also keep Turkey from stealing Syria’s oil fields that ISIS now holds . Embarrassing for the US to have two groups that it supports go at each other , but it keeps this war going , sell more guns ! If they manage an agreement with the Syrian government they might stand a chance , the Americans really don’t have friends , only “interests”.

Kurdish forces are part of the SDF and the SDF does not consist of imported wahhabi islamistsbut are secular Syrian kurds, some arab tribes, syriacs and a few arab and turkmanformer FSA groups.

Thank you for the tutoring , I was under the impression the SDF where the rebel group backing the Turkish invasion . Would you possibly clarify.

It mainly al nusra and arhar al sham that turkey backs along with some other turkmen tribes as far as I know. Basically wahabi crazies and mercenaries much like isis. There’s evidence of turkish involvement in massive black market oil scheme that includes isis as well, but that got shut down to a large extent because of Russian airstrikes.

Awfull reading about what SDF really is and try to be. Its only one year old and try to BUILD better than YPG and more east and west. Try this link instead of just critiseize knowing not very much about it.

And dont forget it written in letters as facts and not just as a temporary matter. BUILDING SOMETHING THERE SHOULD MAKE SOME RESPECT.

Well Dutchnatioanal has written it too.

What is interesting is to know whether the village was taken by the YPG or the SDF as in non YPG SDF.

Furthermore, the YPG consists also of members born (both kurds and arabs) west of the Euphrates and I do not see why people from the region cannor liberate a kurdish village from IS.

Is there any reason why a kurdish village should be liberated by turkish troops and mercenaries?

Its very easy. YPG wants a belt of mainly kurdish autonomy all along the turkisk border – at least a narrow one to Afrin south – the small finger you can see at the maps right now. YPG would like to have somethimng more and non only that minimum.

SDF only want more local rule in many small dots, but also kurds comming back to areas which they were deported from.

Maps about that exist, but some of it only reliable 90%.

Turks has at least 3 dislikes about the YPG version: 1) Kurds “could & would” control the contact between Turkey and the heavely populated western Syria. 2) Easier for Kurds to come in and out for Kurds, where PKK violence is well known. 3) They still dont get why PKK is violent and wont change in the most stubbern way and its true YPG sometimes is a litlle bit too close family to PKK.

Well thats the short private version in my head as neutral as I see it.

Kurds were deported from areas hard and concentrated fx in Afrin. Very well agriculture land severakl 1000 km were taken in Syria east and Sunni arabs were setlled instead. Thats why some call thing around Hasbah etnich cleansing but many Kurds(YPG) see it as just taken back STOLEN land.

The exrtra Sunnis of today were given that land by the father of Assad, but the grandparents of the kurds are still a live knowing, where they lived as children and Young.

That MY VERSION. But now You have got at least one explanation.

The last explanation around that is the fact, that all in the Frech terrotory called Syria as many others has raised 10 times during the last 100 years. That means You somehow have to get space and jobs for all of them – or else it will become poorer.

The nrthern parts with many kurds traditional has been the poorest parts of Syrian and has got less help then others. 3 years of not rain made kurds and others starve to death. They got almost no help.

Well thats also reasons for most kurds in Syria and Iraq has taken in a more sekular system replacing Assad and religios(Sharia) rule with much more sekular ones, where the goverment has to take care of all and the vomen are equal citicens and try to educate the population much more. They have some succes, but the level they come from is very low, but compared to others they are improving so You can see its true.

My version again. Hope its help.

I know why the kurds do what they are doing and why Turkey opposes that.

Still it is not clear on what grounds the coalition would have problems with kurds liberating the kurdish belt between Arima and Ahres, a completely kurdish string of villages and towns.

The only thing that comes to mind is appeasing Turkey by condoning them committing ethnic cleansing and other warcrimes and supporting extremist islamists.

If that is the case, the US has sunk low indeed.

Well, I think USA dont care. They want to stabilize, what they think has to be stabile and make noise, where they think noise is a fine thing.

Think they dont count with kurds as something much because its an inland, which easy can be blocked by neighbors. On a map/globe they are just a narrow borderzone.

About the Koalision: They are for a united Syria without autonome zones at all – Just as Assad. They are not for making a new state for themselves – lets say in one of their territories at all.

One state. No one like kurds by tradition. They were by being one of the small ones used and were Ottoman oposition to the majority of Arabs. Now they are a big problem for Turks because they are so many and different from the Turks as well as divided to 3 other countries and not obeying Turks keeping them down(and the other way too, the violent part by PKK).

Turks wont de escalate and the negosiations undtil 1915(I think) was a joke only at very low lewel, where only the Kurds should change.

thats how I get it.

We will see in the near future but I fear you might be right.

Personally I find the maps quite informative and easy to understand. I only mention that because someone in the comments was saying they were hard to understand. I’m curious how this will play out as far as ypg funding by the us. It will continue, it’s just a matter of whether it’s admitted to or not. The us will give anyone willing to fight the legitimate Syrian government the means to do so.