On October 25, the Kurdish People’s Protection Units (YPG) launched a series of attacks on the alliance of Turksih-backed militan groups known as the Free Syrian Army (FSA) in the area northwest of Al-Bab in the Syrian province of Aleppo.

By now, YPG units have entered the villages of Til Madîq, Hecinê, Qarami, Jabal Na’i and Mişerefê and engaged pro-Turkish militants in the villages. Some pro-Kurdish sources argue that some villages have been already taken.

The YPG took an apper hand on the recent decision by the Turkish Armed Forces and their proxies to halt offensive operations in the direction of Kurdish-controlled town of Tell Rifaat. 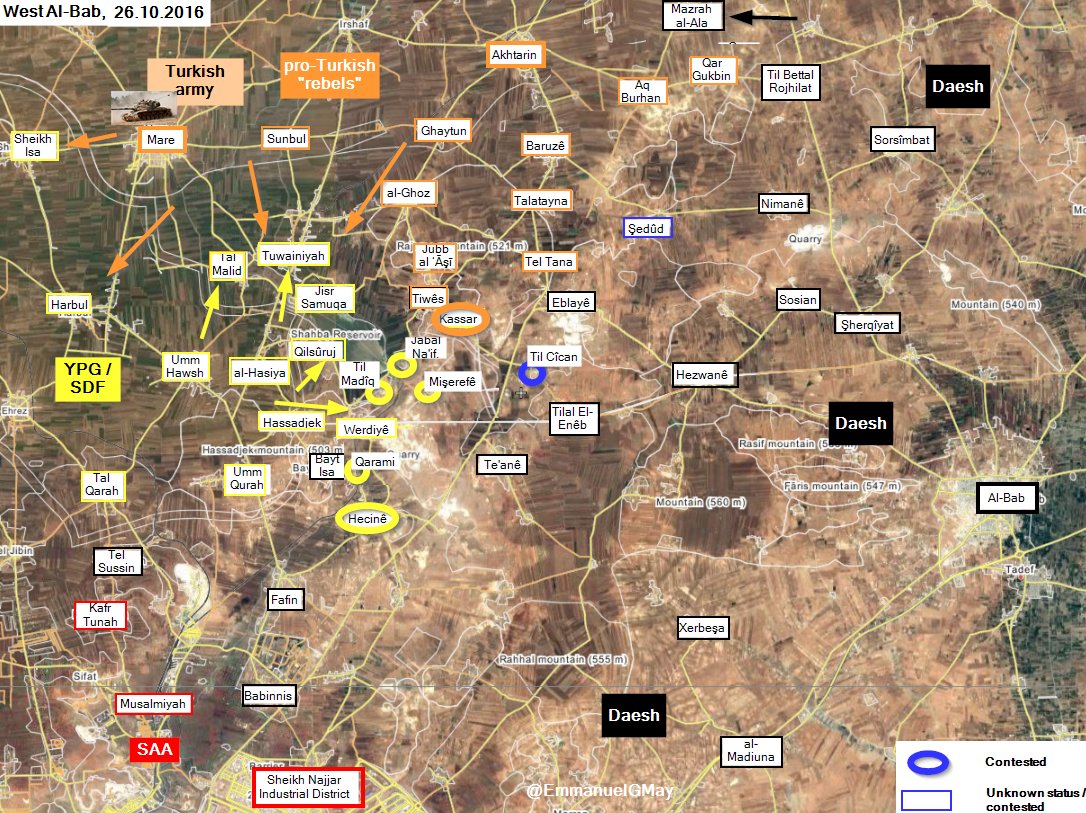 But why do the Affrin kanton kurds advance and the ones from Manbij don’t? can someone pls explain it to me? and why don’t Iraqi kurds move to help also in Syria?

Barzani Kurds and PYD/PKK are not that uh close, let’s say. Many times Ocalan(leader of PYD/PKK) said we see Barzani as an insect. So that explains their friendship alittle bit.

As for Manbij; although Turkey is not puting boots on the ground, or, using a huge force against Afrin kanton, they will do it for Manbij. Around 45.000 soldiers and hundreds of tanks are waiting in the Nizip.

Why its like this? I have no idea. Probably it has to do with US.

Thanks for the info mate, if you could attach a reference from this Op turks are preparing towards Manbij I would aprecciate it a lot. Greetings!

You can listen here but… It’s Turkish. I doubt someone will add English subtitles :D

I guess there was a agreement between the US and the Manbij Kurds. The later somehow promised under US pressure that they would leave Manbij and go back East of the Euphrates, but they didn’t and stayed in the city they have liberated from ISIS. Americans may have eventually said to them : ‘Ok, stay in Manbij but don’t go any further West’

And so the proxies are used again to accomplish the goal. The Turks thought things were going there way: they had an opportunity to smite the Kurds and prevent their link up. But while they were putting on their stage play with IS, the Kurds were simply waiting, watching and preparing. Now the Turks are under Kurdish counterattack, and calling in air support has become dangerous. Meanwhile, as per the US plan, no one will likely be advancing against IS for awhile, since they have more pressing matters to attend to. IS has the leisure to shift it’s personnel from Iraq, and prepare for further operations, without having to shadow box with the Turks.

Erdogan is saving Syrian Statehood in Syria and threatening Iraqi Statehood in Iraq, YPG is the real threat to Syria because they are the darlings of Western Zionist aspiration and a hippy type identity with great potential for “pseudo” Jews (Pharisee, believed in life after death why ? which Prophet did they learn this extraterrestrial message from ?, when no Prophet the Jews recognised ever Sanctioned the Pharisee.) Mark 12; 18, Matthew 22: 23-33 and Luke 20; 27-40, Prophets the pseudo Jews recognised only ever Sanctioned Sadducees and scorned the Pharisee, – Mark, 12; 18, “The Sadducees didn’t believe that people would rise after death. So some of them came to Jesus and said.” -. Here is a juxtaposition of truth and lies existing in the same campaign. Only Allah knew then who was telling the truth because the Jews could have become Christians. Allah is offerring the exact same choice to Erdogan, the truth is, ! he should support Syria against YPG who betrayed Damascus and leave Iraq to the Iraqi people.

FSA are more of a real threat

The Democratic Republic of the Congo had an identical confrontation with US sponsored insurgency designed to control and expropriate its resources by setting up client regimes, Che Guevara fought there 1965 against Tshombe who is reflected by the FSA today in Syria, the pattern continued when Mobutu was challenged by Kagame who was installed in Power by a false flag genocide, but still the US imperialist forces didn’t succeed because Kagame was seen by most Governments as an auxiliary of the US and IMF, exactly the same as the FSA. But the Kurds are loved by Libertarians and seen as a progressive force, which is not true, they are Muppets of israel, most people are.