Security forces in the Iraqi Kurdistan Region had apprehended a dangerous terrorist running a sleeper cell of ISIS in a raid near the region’s capital, Erbil, the U.S.-led coalition announced late on August 21.

“Acting on a warrant, on Aug. 20, elite Kurdish Counter-Terrorism Director troops captured ISIS sleeper cell terrorists in Erbil,” Col. Myles B. Caggins III, a spokesman for the coalition, revealed in a Tweet.

According to Col. Caggins, the terrorist was responsible for coordinating the movement of ISIS terrorists, money and weapons through the Kurdistan Region.

“The sleeper cell that was caught in Erbil was talking to other ISIS managers – ISIS mid-level leaders – and arranging for fighters to move through Kurdistan into other regions in Iraq and Syria. This involves moving money, talking to safe houses and giving those fighters instructions,” the spokesman explained to Rudaw.

The spokesman told the Kurdish network that the coalition can’t reveal any addition information now because it is used by the intelligence to develop additional raids.

This isis and sleeper cell nonsense has become ridiculous and obsolete, the imaginative Anglo-Zionists together with their Arab traitor slaves have run out of imagination, who forces them to wearily repeat the same lies? this is a sure sign of their moral failure and the fact that they have no other hidden cards up their sleeves with which to cheat at the geo-politics table.

If they are so many as You insist and insinuate, they are the majority and has rights for inflluence.

LOL. Time to contrast this with the news coming out of the areas where the Syrian army’s been fighting ISIS:

What a fucking joke.

Exactly what I have been saying.
US is cleaning out the terrorists in Syria, while Assad and Putin is bombing civilians who refuse to vote for dictatorship and only want a little more freedom.

Where exactly is Kurdistan located ? I cant find it on any official maps, or the list of UN recognized nations. Is South Front creating nations now ?

Kurdistan is an autonome of Syria since 2004 and in its north west corner. Bagdad don defend the area. They do themselves by 11 Peshmerga milisias.

Its no surprice You cant find any facts even they are in TV as well as on Internet.

An article with a very good map: https://www.polgeonow.com/2017/09/referendum-2017-iraqi-kurdistan-map.html

Do you know what sarcasm is ?

I didnt see that.

Where is Catalonia? Or Basque? Or Galicia? The Kurdish are not alone.

Kurdistan as nation is located on CIA, State Department and in Israeli maps together with Caliphate and Greater Israel where Palestine does not exist as country any longer.
For some reason South Front is shearing with us the information about this hypothetical country.

Why,…. we of course do not know the answer…

Actually it was there in the Osmans. So CIA made the Osmans:)

It was an accident it wasnt regained after WW1. It came between two negosísations and dissapered just at Poland did.

It was a region just as Aleppos. Raqqa and Diabykir and as them divided by the French and Lausanne(Turks took half).

Why dont You read about things instead of insinuating things. And here You ignore that Saddams killed 1000s there and moved them around more then any do with their cattle and into areas, where hardly any can live.

Thats why USA and we made a safezone for them as well as removed Saddams in a very unsmart way.

If You are a cook and You mix food up like that many has died in Your restaurant. 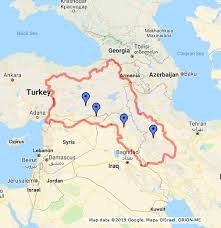 If “that” is Kurdistan, what are they doing on Syrian oil fields than?
Don’t they use their own map to see where they belong?

Yes, they have stretched the boundaries in Syria quite a bit.
No wonder the local Arab tribes are not pleased. :/

Yes those more or less ex-Zionist “jihad” boys now under the dominance of those whom they despise. They are acting like banal cowards.
Maybe their tribe leaders were bought for few dollars each to kowtow US interest and keep rebellious youngsters down. PATHETIC !

If they didn’t fought with muslim women warriors, that Kurdish that you don’t recognize would be death now because of paranoid ISIS… ISIS was easily defeated because they believe in some bull shit about being killed by womens its a very bad thing…

Look, i am atheist, what should i know about their afraid of muslim warrior womens??? Goodbye paradise… :)

Ricardo you sound like guy from Danemark Jens (well known on this forum)
Nobody is really fighting Kurds there at the moment.
This romanticized story about “fight” of the Kurdish women against ISIS is far too exaggerated in feminized Western medias and society.
Kurds are very traditional and role of the women is not turned up side down like it is on the West.

The blue dots are our bases protecting Kurdistans freedom.

We all know how and why this happened, don’t we?

The Kordish security kept increasing the amount of bribe they demanded to leave him alone, but got greedy to a point when the ISIS guy refused to (or couldn’t) pay a dime more than he used to. He made a mistake and the security force bosses make up for their loss by selling him to Americans.

That’s how it works in the KRG.