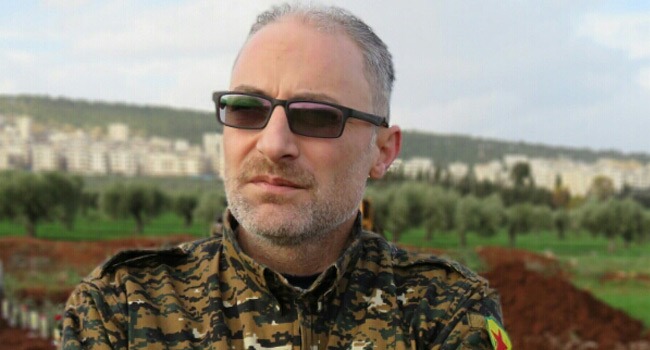 Rezan Hido, a Kurdish politician and a former media consult of the People’s Protection Units (YPG)

The U.S. is trying to sabotage the ongoing talks between Kurdish-forces and the Damascus government, Rezan Hido, a Kurdish politician and a former media consult of the People’s Protection Units (YPG) revealed in an interview with RIA Novosti on January 12.

According to Hido, Washington’s Special Representative for Syria, James Jeffrey, delivered several messages to the leadership of the Syrian Democratic Forces (SDF) demanding them to slow down the negotiations with Damascus and promising to discuss the idea of establishing a no-fly zone over northeastern Syria.

The Kurdish political described Jeffery’s messages as “disturbing” and called on the Kurdish leadership to deal with them in careful manner.

Furthermore, Hido stressed that the SDF should take a decision on the talks with the Damascus government as soon as possible and regretted that some Kurdish officials are still pinning their hopes on a possible change in the U.S. decision to withdraw from Syria.

“Talks with the Syrian government are still ongoing in a positive atmosphere,” RT quoted Hido as saying.

Jeffrey made a visit to Turkey recently, where he tried to strike a deal with Ankara over northeastern Syria. However, Turkey’s plans to attack US-backed Kurdish forces and invade the region hindered his efforts.

It appears to be that the SDF’s only real option is the deal with Damascus as any U.S. solution would likely involve Turkey, which has demonstrated its agressive attitude towards Syrian Kurdish groups during its operation in Afrin in 2018.

the YPG/PKK/SDF are running out of time, they dont wanna die by Turkey LMAO

To be perfectly honest Gay Wolf, the Turkeys have not accomplished much against the turds in 60 years. Even Diyarbakir is hardly safe and Kurd turds operate freely in so-called Turkey. First, I would change the name from funny Turkey, it just begs to be carved up around thanksgiving and X-Mas.

Unbelievable EVIL deeds perpetrated by American scumbags like the dirtball James Jeffrey…now that they have lost and they have to get out, they want to poison the well so that nobody can move on…that illustrates the Amerikkkan mentality…they will never turn over a new leaf an start acting like human beings…the only solution for the world is to remove them like a cancer…

History has shown that the Americunts are cowards and only leave when the cost of occupation becomes too high. In Syria, both the Zionist scum and Americunts are operating without any costs in men and material so they think they can continue the terror campaign. Infact, the Americunts are increasing the number of occupation troops to around 4,000 now with 1500 British poodles and 500 faggot froggies and about 800 other NATO poodles from such third rate shitholes like Norway, Belgium, Denmark etc. So far only 5 Brits have been killed in Syria.

YPG , PPK , America need fighting , no friendly talking , they are invest to you mild .$ !!

I’ve come to UTTERLY distrust ALL “POLITICIANS”…BUT! The Kurds have impressed me by BOTH their “WARRIOR MENTALITY & SPIRIT”, and, as well, THEIR WISDOM…I’m tending to believe him!

Washington is SOOOO immensely CORRUPTED that I ONLY pay attention in order to avoid being a target of some slimeball…I don’t believe that I’ve ever heard of J. Jeffrey…BUT! IF (FB) you’re correct, then I PRAY that the LORD utterly confound him & his cadre of CORRUPTION & get US out of there without “poisoning the well”!!!

FB…Don’t “broad brush” ALL of us Americans…there ARE MANY of us who PROBABLY, whole heartedly agree with your understanding of the REALITIES over there…BUT!

Our MEDIA is SOOOO corrupted that we can’t get TRUSTWORTHY intel…THAT’S a BIG REASON WHY I monitor SOUTHFRONT! At LEAST they’re TRYING to be balanced! AND FAITHFUL!

The Kurds have allways been sold by their chiefs to the US, time after time ! Eatch time it ended in catastrophy’s

Kurds are just prostitutes for hire. They have been doing this for centuries and lost every time. This time will be no different.

James Franklin Jeffrey , Special Presidential Envoy for the Global Coalition to Counter the Islamic State of Iraq and the Levant .Assumed office January 4, 2019 . Preceded by Brett McGurk United States Special Representative for Syria Engagement. I thought he was the one that resigned when Trump said ” Get out ” but looks like he is the one taking over. He has been around the Middle East ( ME ) for a long time.

Another globalist and is a CFR member.

Although there certainly are many good-hearted ones among you, the majority of you have a predominant mentality of predators. Judging from your history (as little as I know), I would say that the conduct of the media in US is a result of the people’s mentality and not the other way around. Sorry to say that to many dies as a direct result of the actions of US to be able to wholeheartedly feel sorry for you.

The MSM has been infiltrated by the CIA since the 1950’s..half of what they say ends up being 100 % B.S. There is no free press amongst the large networks and it is all agenda driven. The media definitely manipulates the public in my opinion and it is way more effective then the propaganda the Soviet Union had..just look up Church committee on youtube. Look at Kennedy’s last speech where he talks about Karl Marx & secret societies done in front of the American Newspaper Publishing Association.

ah the israelokurd in action!!

The US has demonstrated for decades that political agreements are always reneged on by the US ‘if the wind changes’.

The Kurds would be foolish indeed to put their lives in the hands of the FUKUS gang.

That is why all agreements the US make are done on toilet paper. Only good until it gets flushed.

“and promising to discuss the idea of establishing a no-fly zone over northeastern Syria.”……. whahahaha, you delusional twats.

Jim Prendergast
Reply to  You can call me Al

At this time of year there are no flies in the North of Syria. It’s to cold. No flies until spring.

You can tell Hidiot that US is not trying to sabotage anything. What US is doing is creating a new land for you sh.thole guys to be named Free Kurdistan, and when you are on our payroll and we pay your guns, beers and underwears you should STFU.

Perhaps the dates were old and wrinkled..

The comment aout a no-fly zone is interesting me. The US Coalition could not establish one during all this time and that is now an option. I don’t think so.

The Kurds NEVER have a future with USA…..not in Iraq, not in Syria………

and the most demented states of a is trying to make turkey the protector of the kurds which is about as ludicrous as it can be. if turkey has one enemy in the area it is the kurds so I guess it a question of asking the poacher to be the game warden. just a befuddled and alzheimer stricken state department in the most demented states of a can have formulated such a plan, in fact mind-boggling!