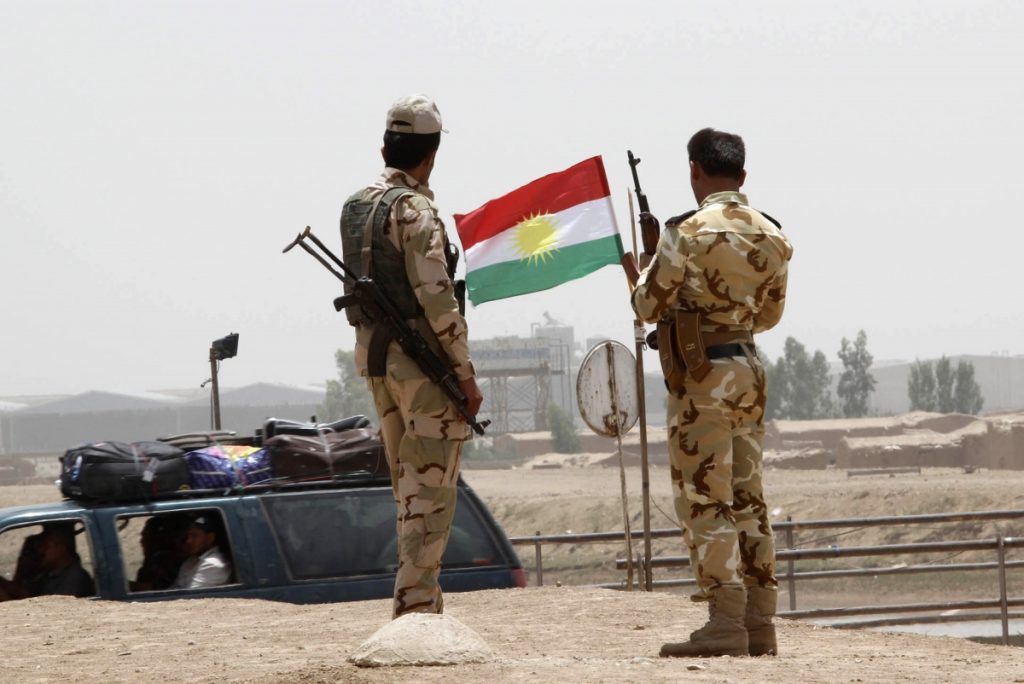 Members of the Kurdish security forces stand at a checkpoint during an intensive security deployment on the outskirts of Kirkuk. FILE IMAGE: Reuters

On September 12, the Kurdish Peshmerga deployed two brigades in Kirkuk city and in Tuz Khurmatu town south of Kirkuk city, according to Iraqi sources.

The Peshmerga deployment came ahead of the Kurdistan Region independence referendum that will take place on September 25.

Mohamad al-Byate, a Turkmen commander of the Iraqi Badr Organization, called the Iraqi government to “bear its responsibility in front of the Iraqi citizen or submit its resignation” on the light of the Peshmerga deployment.

“These forces didn’t come for the referendum, they came to persecute Arabs and Turkmen and to impose the referendum by the force of weapons, tanks and armors,” al-Byate said in an official statement.

On September 11, the Iraqi Parliament voted against recognition of the upcoming referendum making it illegal, according to the Iraqi constitution.

Furthermore, on September 12, the USA and the Arab League joined the Iraqi government, Iran, Turkey and Syria in opposing the upcoming referendum. 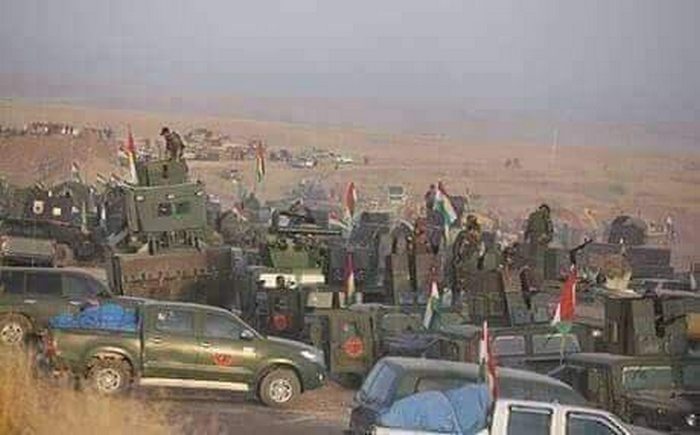 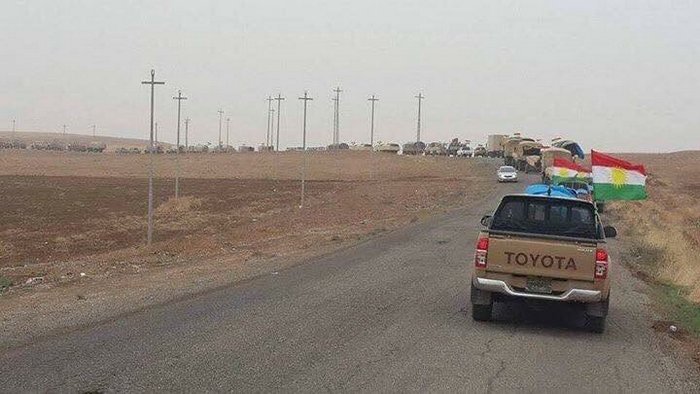 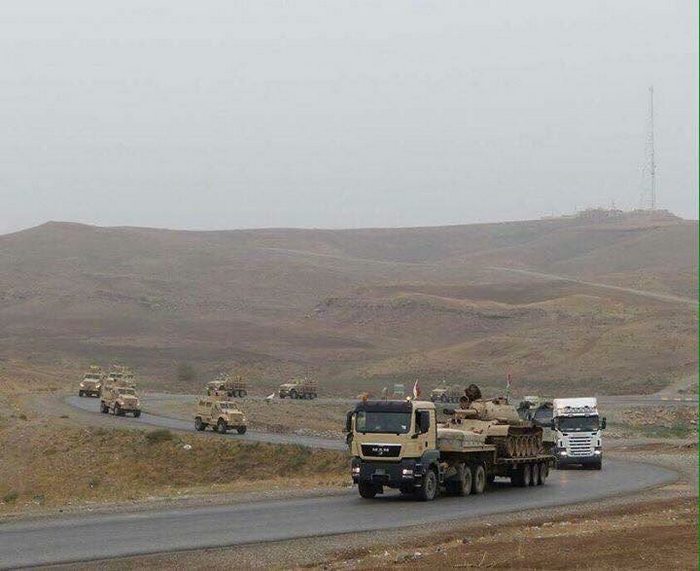 this all us supplied weopeons to kurds barzani slave . if US REALLY AGAISNT THIS REFENDRUM THEY SHOULD HAVE REFUSE THIS ARMOURED TO BE USED AGAINST OR TO SEND NEAR KIRKUK OF KIS ETHNIC CITY . IF REFRENDRUM GOES AND KURDS GET INDEPENDENCE THEN THEY WILL ETNIC VLEACE ALL ARAB TURKMEN IN THAT ARE AND CREATE ANOTHER CIVIL WAR. BARZANI IS ISRAELI STOOGE AND AMERICAN SLAVE

Yeah, this type of aggressive attacks on others, is an old one, and like Israel, the Kurds is rapidly as we speak expanding their area of influence, witch gives us this events of ethnic cleaning, that word is hard, but what else covers the actions of the present so called Kurdish whatever regional Gov. wants.

Expanding their territory to have something to deal with, aka gun boat diplomacy, huh, yeah, we give you this, and since we are so nice, you give us that, yup, like an pack of premature mafia boys. And why, I cant understand, I have read about Kurds for an life time, but when their end goal, to be an independent people, drowns in some few leaders ambitions of creating an state, to do what, control, over what, schools, infrastructure, huh, healthcare, or getting as close as it is physically possible to push an human body to anything that have to do with Oil. Corruption and Greed, Kurds is your mortal enemy, you never learn do you, like the stupid Khazar’s.

It is in fact hart breaking to see an people do this, and refuses to see, and instead gives into groups operating in the fringes of reality where they do it for them self, not the Kurdish people and even less to t he rest of the natives in that region, witch is totally ignored in this days.

This time Kurds, you are on your own. Blinded by illusions.

Why should the world NOT support the Kurds.? Don’t tell me about history, tell me what the Kurds believe! Do they allow ‘freedom of religion”, do they believe in Democracy? How about freedom of speech ? If these 3 areas are 80% true I’d say they have a culture that can work out its problems without resorting to killing civilians, and that is why I support them.

Will they give up their total welfare system ?

Kurds like Barzani and Zebari helped aid the rise of ISIS as they were US lapdogs and the US needed a way to prevent the destruction of their joint project with Israel, UK and France. This is the most effective way as Syria is on it’s way to eliminating their proxies in more ways than one.

would be more rich. and this is not important. it is about principle. if we, as west press this way in the world, should be allowed also on our soil. in europe is ok, but in usa …

They have more of connection with ISIS than you think they are all about ethnic cleansing , you should research some old videos on YouTube where they committed ethnic cleansing in predominantly Minority regions. They don’t believe in democracy like Iraq but more like Saudi Arabian style , Barzani will be Pasha there.

The Zionist agent Barzani is leading the uneducated Kurdish masses to their slaughter through emotional manipulation. He doesn’t really care about Kurds, he’s just following his (((boss)))’s orders.

look how they are piled up in one spot, 1 bomb should do the trick :P

Proposed ‘Kurdistan’ is simply cover ploy for proposed large US military base – one that US and Israel would ultimately try to use in long term to disrupt and infiltrate Iran via Kurdish agents.

The US has any base it wants in Iraq, and if they want a new one anywhere in Iraq they can get it.

A vote up for your comment, but then others have the right to take bases in the USA too. or not? Could you please explain what the US iare searching for in other countries or near their border lines? We don’ t need a self-called world police officer.

….until someone ‘with normal brain’ stops it.

The Kurds are getting ready to attack the Iraqi armed forces and ethnically cleanse Kirkuk.

Talkin out of your ass

Kirkuk city is not an Arabic-Kurdish-Turkmen city, The kurdish population is 75% kurdish. The rest are sunni arabs, sunni turkmen and they hate shiite forces and iraqi army.

While Tuz Khurmatu town is not purely Shiite Turkmen town. If this was true, Peshmerga would not had controll over 50% of the city because 50% of the city are mainly Kurds.

The kurdish population is 75% kurdish

PMU and shiite forces should stop threatning Kurds and Kirkuk. This is why kurdish forces sent more troops there.